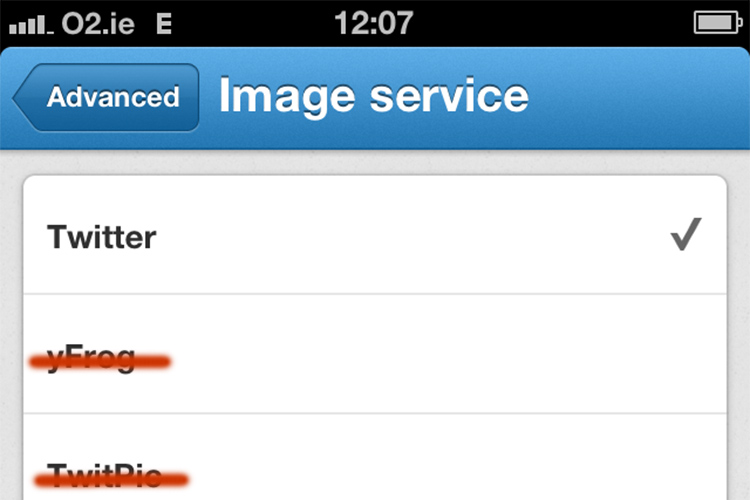 With all of Twitter’s rules, display guidelines and API changes over the last few months, it’s quite clear that Twitter now wants to be in complete control of its service. So much so that it is removing third-party image services like TwitPic and yFrog from its official apps.

In August Twitter published upcoming changes to its API, the method by which third-party clients “plugin” or communicate with Twitter. The new API version, version 1.1, reduced rate limits for third-party clients and placed limits on the number of users client applications could support – which can only result in the eventually smothering of these clients over time.

Today’s news, which hasn’t yet been confirmed by Twitter, is just another step in Twitter’s grasp for control. The official Twitter apps currently allow images attached to tweets to be uploaded to six different third-party image services; yFrog, TwitPic, Mobypicture, Twitgoo, Posterous (which Twitter owns) and img.ly.

The option to upload images to these services will likely be removed in a forthcoming update, forcing direct image uploads on Twitter’s apps to use its own image service – first introduced in June 2011.

The largest of the six third-party image services currently supported by Twitter is TwitPic. Its founder Noah Everett understands Twitter’s reasoning but wishes it were different,

“They’re trying to control those eyeballs on their apps, they’re an ad-based company, they make money that way.”

Since only 23% of tweets originate from third-party clients, the user base for these image services will be severely limited overnight.

Twitter’s official apps also include video service options yFrog, TwitVid, Mobypicture, Posterous, and Vodpod, but since there’s no official solution provided by Twitter regarding video, these should be safe for now.