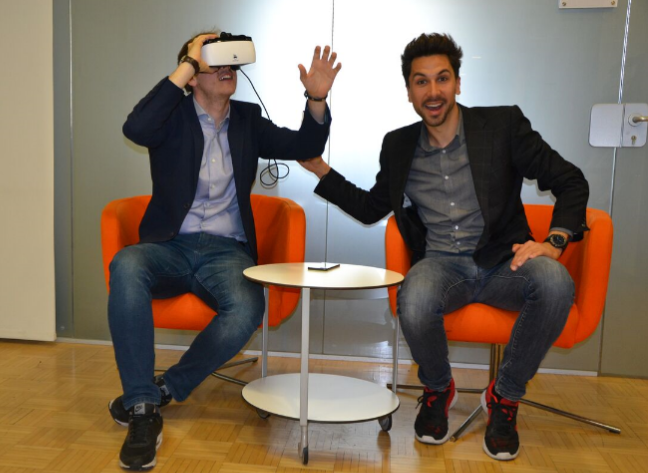 The startup behind an all-in-one VR headset looks to bring its cutting-edge technology to the edtech sector by offering schools an affordable alternative.

After smashing its 30K Euro goal on Kickstarter in just four hours and being named one of the top five coolest startups at TechCrunch Disrupt by Observer, ExChimp is looking to fill the mid-range gap for educators.

ExChimp’s AI1 All-in-One VR Headset isn’t going to cost thousands of dollars, nor does it require a high-end PC or even a hot smartphone pressed against your face.

The super-advanced VR headset shows off an impressive seven-hour battery life, is 30% lighter (just 389 grams) than its competitors, and retains a Quad HD display with a resolution of 2560 x 1440, which about doubles industry standards.

With this ground-breaking technology, ExChimp is now looking to help educators use the power of Virtual Reality to immerse students in new learning experiences they would otherwise never have.

“We’ve been hearing from schools that they want to be using VR, but the cost point is just too high, so we’re hoping that this new headset will allow them to use apps like Star Chart, but at a lower price,” ExChimp CEO Stefan Ponsold.

After testing all low-cost systems that run on smartphones and high-cost systems that require high-end PCs and graphic cards, ExChimp worked 12 months on a new groundbreaking system that bridges the gap between price, mobility and quality.

“Our business is the transformation of potential technologies into applicable products worldwide – based on ‘open innovation,’” added Ponsold.

The team at ExChimp is based partly in Sunnyvale, CA; Graz, Austria; and Shenzhen, China; and has over 30 years of experience in the development and worldwide distribution of consumer electronics. In the past years, they have raised more than $400,000. Their vision is to make the VR more accessible to a new audience that hasn’t been able to buy high-end systems such as Oculus or HTV Vive.