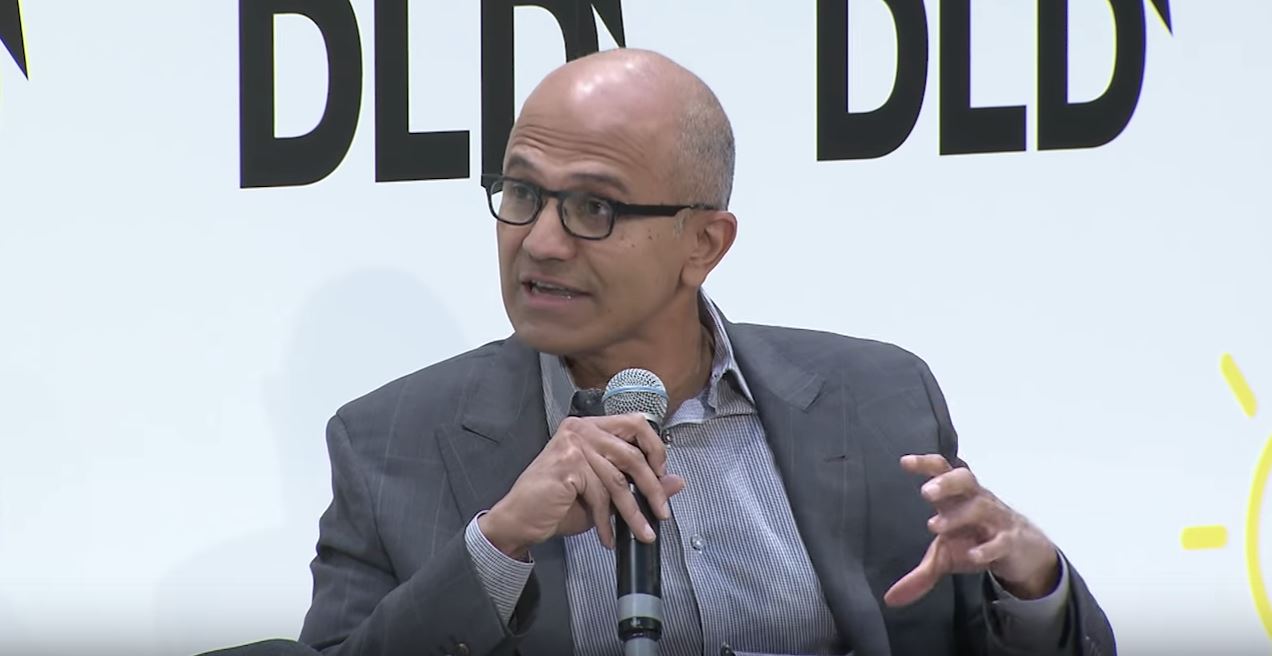 Microsoft CEO Satya Nadella warns against hubris and worshiping the major tech giants in the company’s quest to democratize AI.

Speaking at the DLD tech conference in Munich, Germany, Mr. Nadella said that Microsoft’s mission of democratizing AI should exclude the worship of the 4-6 tech giants that are developing this technology.

“We’re trying to teach machines to learn, so that they can do things that humans do, but in turn, helps humans,” said the Microsoft CEO, adding, “the next phase, to me really, is how can we democratize this access [to AI] versus worshiping the four, five, six companies that have a lot of AI.”

Ironically, Microsoft is part of a partnership that works with the “four, five, six companies that have a lot of AI.”

In September of last year Google, DeepMind, Microsoft, Facebook, IBM, and Amazon collaborated to form the Partnership on AI to “formulate best practices on the challenges and opportunities within the field.”

By forming a partnership with the biggest tech giants on the planet, Microsoft already holds a place in the proverbial Parthenon of Tech Titans upon the Mount Olympus of AI.

However, Microsoft’s mission to democratize AI among the major players in tech runs the risk of creating an oligarchy rather than a democracy, where knowledge and power remains in control of the few elite.

Mr. Nadella, for his part, assured, “This year and the next will be the key to democratizing AI. The most exciting thing to me is not just our own promise of AI as exhibited by these products, but to take that capability and put it in the hands of every developer and every organization,” Bloomberg Technology reported on Monday.

Does Nadella define democratizing AI as making it available to only “developers and organizations,” or does democratizing AI mean making the technology accessible to everyone on the planet? Is the mission truly that of a democratic open source, or more of an oligarchy where the tech companies guard their most powerful research?

Continuing with the Greek motif, the Chief Executive also warned against hubris as Microsoft continues to expand and acquire new startups and enterprises.

“There’s a thin line between hubris and confidence,” Nadella said. “Always there is risk of hubris coming back, missing trends. The only long-term indicator of success is, ‘how good is your internal culture?’”

And what better time to mention hubris than after Microsoft’s announcement last week that it had acquired AI startup Maluuba?

Maluuba’s mission is to create “literate machines that can think, reason and communicate like humans.” In other words, the Montreal-based startup’s goal is to give machines the “gift” of curiosity.

Maluuba claims to have “designed a deep neural agent that learns to accomplish these tasks through efficient information-seeking behavior,” and that “such behavior is a vital research step towards Artificial General Intelligence.”

But just as Hera, the wife of Zeus, gave Pandora the “gift” of curiosity, Microsoft’s acquisition of Maluuba may too succeed in bringing curiosity to AI.

If they succeed, will Pandora’s Box be opened to wreak havoc and destruction upon humankind, or will it usher in a new era of hope?

The answer lay in that thin line between hubris and confidence, or between pride and doing what is best for all to democratize AI.

Let us hope that Microsoft’s and Maluuba’s curiosity will propel us towards the greater good, and not after unleashing total devastation.