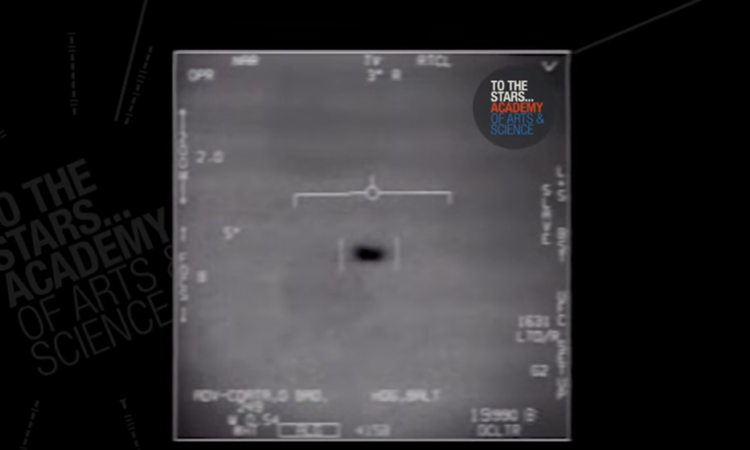 FLIR1 image from To The Stars Academy of Arts and Science YouTube video.
29Kviews

Engineer, peer-reviewed author, and Lyft driver Michael Boyd has prepared an independent forensic analysis of the To The Stars Academy of Arts & Science (TTSA) video depicting Unidentified Aerial Phenomena (UAP) taken off the coast of San Diego by US Navy pilots from the USS Nimitz in 2004.

Boyd, who patented a device and method to generate and capture gravito-magnetic energy, suspects that the video may have been altered prior to going public, and he is concerned that the Navy may have provoked the UAP into firing an electromagnetic pulse at a US Navy F/A-18 Super Hornet jet.

Before diving into the technical analysis of the Tic Tac shaped Nimitz UAP, aka FLIR1, here are some of Boyd’s forensic findings:

The forensic analysis by Boyd is based on his own “personal experience with infrared imaging technology and quantum gravitation phenomena,” as well as research by Dr. Hal Puthoff, with whom Boyd says he was in contact from January 3-13, 2020.

The following version of the report has been edited for brevity, but is otherwise verbatim what Boyd had written. Anything not written by Boyd will be in italics.

The TTSA website claims the “FLIR1” is the second of three US military videos of unidentified aerial phenomenon (UAP) that has been through the official declassification review process of the United States government and approved for public release.

The US Navy Media email address [email protected] was used to send a copy of this report to the Navy through the Secretary’s Office. The President of the United States was sent a hard copy.

The YouTube video https://youtu.be/6rWOtrke0HY was accessed on January 19, 2020 for purposes of this report.

I am uncomfortable with the authenticity of claims that this is official footage and that it was unaltered prior to its release. I request a complete and unedited copy of the US Navy’s video be released for further research and analysis.

My analysis is limited therefore to the video data provided in that YouTube video [below].

“These slides make me feel uncomfortable”

In slides 21 through 28 partial saturation of the detectors’ background signal was observed, significantly reducing the detector responsivity. These slides make me feel uncomfortable.

I have an unmet need for reassurance of future nonviolent interaction with UAPs. I request the support for further failure analysis and for development of protocols for remedial measures.

In slides 31 through 40 high acceleration of the UAP is observed and the UAP appears to harness a loop de loop to increase its acceleration to sub-relativistic speed.

This makes me feel optimistic to met [sic] the unmet need for propulsion systems that harness the power of gravitation and/or vacuum energy for the wellbeing of humanity.

According to Boyd, it’s important to understand concepts such as time dilation and G force in order to understand this technology. He summarized to The Sociable:

For more background information, Boyd told The Sociable that Dr. Hal Puthoff, Co-founder and VP of TTSA, had provided him with a copy of Dr. Puthoff’s research paper, “Advanced space propulsion based on vacuum (spacetime metric) engineering,” and part of Dr. Puthoff’s paper was written into the introduction of Boyd’s forensic analysis.

When reached for comment, Dr. Puthoff told The Sociable, “I shared that paper with a number of individuals who requested it, but I don’t specifically recall whether Michael Boyd was one of them (though likely so). I’ve not seen his analysis.”

Editor’s note: Boyd said that he holds shares in TTSA and he provided documentation of his correspondence with Dr. Puthoff shortly after this article was published.

Slides 6-11 from Boyd’s analysis show mathematically how UAP technology may be possible:

If you are looking for another perspective on the Tic Tac UAP, Dr. Jack Sarfatti has contributed greatly to explaining the physics that go into it. You can check out his interview on the Stardrive Report here.

“There is zero G-force inside Tic Tac at all times even when it appears to make a U turn at thou…” — @JackSarfatti https://t.co/iquektbfVB

The Nimitz UAP incident happened over 15 years ago. A lot can happen in 15 years.

There is advanced technology out there that is way beyond anything that is commercially available at present, be it military or otherwise.