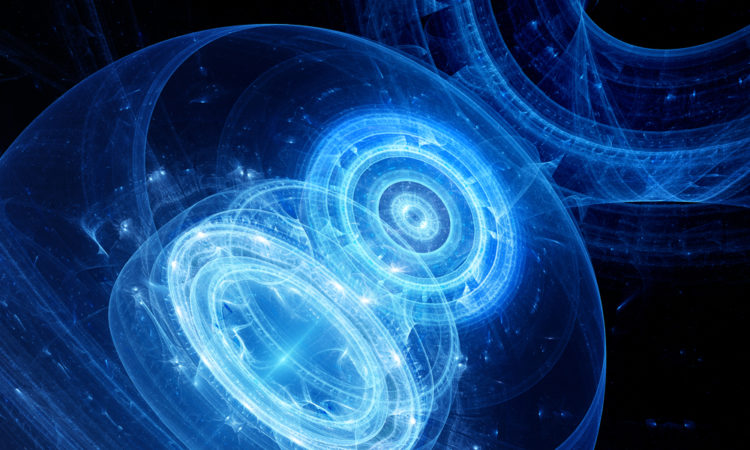 Last year the US Navy confirmed that UFOs exist, meaning someone has access to advanced technology to build them. Declassified government research into warp drives provides insight into how UFOs could theoretically bend spacetime as a means of propulsion.

Slowly but surely, the confirmed existence of UFOs is entering the public consciousness.

We need to be talking about this more: “To the Stars Academy of Arts and Sciences, a group dedicated to pursuing research into UFOs and extraterrestrial life that was co-founded by rocker Tom DeLonge of Blink 182, helped bring attention to the videos.” https://t.co/xAIOEHNxrx

More palatable, perhaps, than claiming these UFOs come from ETs, is the probability that they were built by humans as part of some black budget secret space program.

When you stop to think about the magnitude of what that actually means, you realize that there is advanced technology out there that is way beyond anything that is commercially available at present.

The Navy has confirmed that the UFOs seen in leaked video footage are real UAP, senators have been briefed on UFO sightings, and between 2007 and 2012 the Defense Intelligence Agency (DIA) spent $22 million dollars on research into warp drives, antigravity, wormholes, extra dimension manipulation, and whole lot more!

As a thought exercise, let’s take a look at one of the 38 research papers that the DIA disclosed it had funded as part of its “Advanced Aerospace Threat Identification Program” called “Warp Drive, Dark Energy and the Manipulation of Extra Dimensions.”

Therein it explains how an advanced technology could theoretically bend space and time around a craft as a form of propulsion called a warp drive — which doesn’t violate the cosmic speed limit.

“Physicists have discovered two loopholes to Einstein’s ultimate speed limit: the Einstein-Rosen bridge (commonly referred to as а ‘wormhole’) and the warp drive,” the paper reads.

“Fundamentally, both ideas involve manipulation of spacetime itself in some exotic way that allows for faster-than-light (FTL) travel.”

According to the paper’s authors, Dr. Richard Obousy and Dr. Eric Davis, “If one is to realistically entertain the notion of interstellar exploration in time frames of а human lifespan, а dramatic shift in the traditional approach to spacecraft propulsion is necessary.”

In the paper, the authors back up the claim made by Miguel Alcubierre in 1994 that by manipulating extra dimensions, a warp drive could bend space around a craft by contracting space in front of it while expanding space behind it.

“The warp drive involves local manipulation of the fabric of space in the immediate vicinity of а spacecraft. The basic idea is to create an asymmetric bubble of space that is contracting in front of the spacecraft while expanding behind it,” the authors write.

By warping space and moving through time, the craft wouldn’t be in violation of the galactic speed limit — the speed of light.

Accelerating too fast will crush you and your craft from the G-Force, but keeping your craft in a warp bubble would eliminate the need — the need for speed.

This is one explanation why UAP would a more accurate description because these things wouldn’t really “fly” at super speeds so much as they would be warping time and space.

“Using this form of locomotion, the ‘spacecraft ‘ remains stationary inside this ‘warp bubble’ and the movement of space itself facilitates the relative motion of the spacecraft.

“The most attractive feature of the Warp drive is that the theory of relativity places no known restrictions оn the motion of space itself, thus allowing for а convenient circumvention of the speed of light barrier,” according to the DIA-funded research. 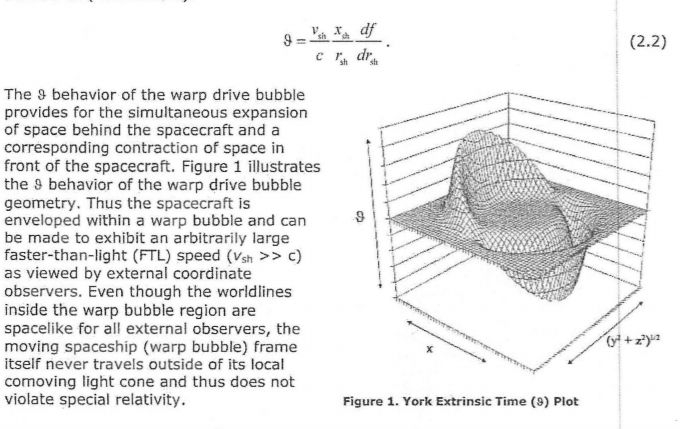 But in order for any of this to happen, one must have access to, and know how to use, very advanced technology. The paper talks about this technology in a theoretical sense, but can you imagine if the theory has already been put to the test and proven?

Remember, UFOs exist, and we don’t know what technologies they use. This is one possible explanation.

According to the authors, the technology involved in a warp drive would have be able to manipulate extra dimensions in order to gain control of dark energy.

“If an advanced technology was able to influence the radius of an extra dimension, then it would acquire direct control over dark energy, and hence the expansion and contraction of space itself,” according to the paper.

Interestingly, “If one were to adjust the radius of the extra dimension in the direct vicinity of а spacecraft, then the dark energy density would also change only in the vicinity of the spacecraft, as would the expansion of space.”

The authors point out, “It is important at this point to appreciate that globally, the universe would continue to expand at the гаtе we observe today, but that only in the proximity of the spacecraft would space bе “stimulated” to expand at some modified rate.” 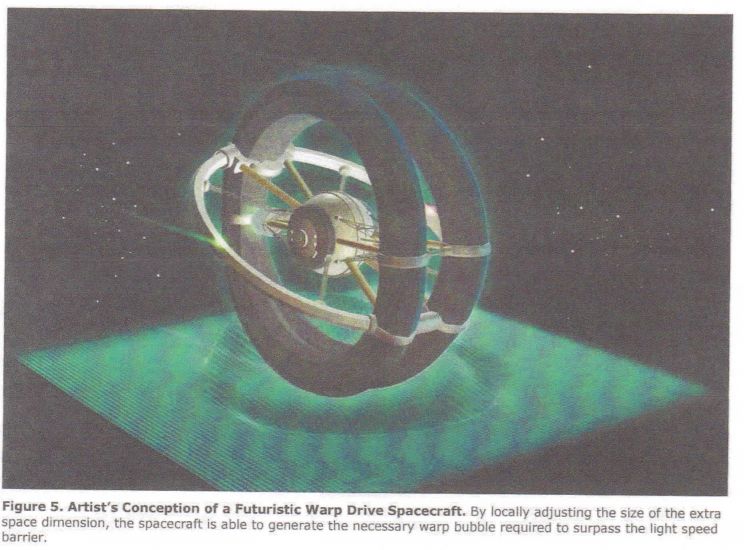 The researchers concluded back in 2010 that “As tremendous а feat as this may sound, at this early stage in the research it is one of the only viable mechanisms to generate а warp drive.”

“UFOs are not in fact UFOs at all; they are time machines. And they aren’t made by aliens; they’re made by humans in the future — the very near future” — Austin Steinbart

The seemingly impossible maneuvers of UFOs can be explained if you think of the UFO as a time machine instead of something being propelled at great speeds.

According to Austin Steinbart, who claims on his YouTube channel to have begun working for the DIA at the age of 17, “UFOs are not in fact UFOs at all; they are time machines. And they aren’t made by aliens; they’re made by humans in the future — the very near future.”

Steinbart says that the military has been ordered to ignore UFOs since the 1950s in order to avoid an “adverse Butterfly Effect.”

Whether you believe Steinbart or not, his assertion that UFOs are time machines has been made by others, and it correlates the theoretical research funded by the DIA — only Steinbart claims that the research is operational and has been for some time.

Michael Masters, professor of biological anthropology at Montana Tech, also made the claim in his book, “Identified Flying Objects: A Multidisciplinary Scientific Approach to the UFO Phenomenon,” that many UFOs are actually made by humans in the future, whom he calls “extratempestrials.”

Although scientists say that warp drives are theoretically possible, “further advances in quantum physics, quantum mechanics and metamaterials” are still needed to make them a reality, according to Joseph Agnew – an undergraduate engineer and research assistant from the University of Alabama in Huntsville’s Propulsion Research Center (PRC).

Whatever you want to call them, the existence of UAP has publicly been confirmed by the US Navy.

Somebody made them, and spacetime-bending warp drives are just one component of a whole slough of government research into the subject.

It gets even crazier when you start looking at government research into stargates, wormholes, and antigravity!