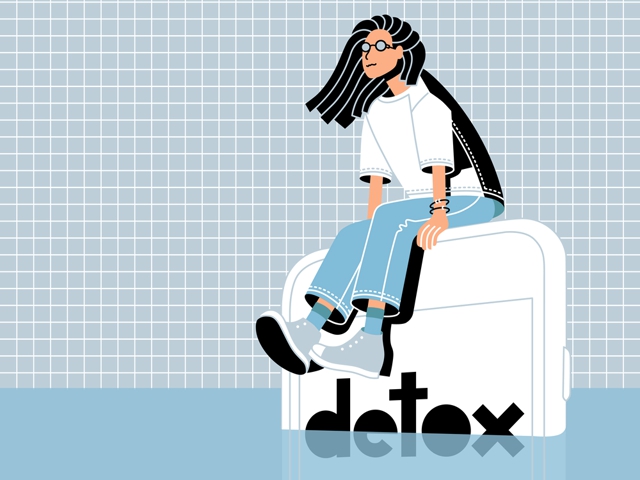 A recent Twitter poll carried out by Mashable revealed that 75 percent of users noticed that their screen time had (unsurprisingly) increased since governments across the world introduced stay-at-home orders to combat the spread of COVID-19.

And with increased screen time, comes increased social media usage: whether it be simply for absent-minded scrolling, accessing information, or keeping in touch with friends and family.

To ease anxiety, some may find it beneficial to undergo a social media detox, or at least a scaling-back on the social media accounts they follow.

This period of lockdown has also given rise to other, less-used social media apps for making video calls, so that people can virtually recreate the social encounters they are missing.

Downloads of the group chatting app Houseparty, which launched in 2016, have spiked this month, according to reports from data insights company Sensor Tower.

And shares of the video conferencing service Zoom have risen approximately 50% since last month according to Deutsche Welle.

Our team has been doing this too! ❤️? https://t.co/tQow1Fp2LG

However, this spike in social media usage can have a negative impact on our mental health.

According to a 2017 study conducted by the UK Royal Society for Public Health (RSPR), social media can be linked to increased rates of anxiety and depression among young people. The study goes on to show that in some cases, social media can be more addictive than cigarettes and alcohol.

As a result, some psychologists have recommended a social media detox during this period of social isolation as a way to lower levels of anxiety and improve our mental health amid already-heightened levels of unease.

This strategy has advantages.

As the media tries to understand the scope of this unprecedented, global health crisis, its coverage of the coronavirus pandemic has been noisy, to say the least.

And once shared among friends, the quantity of constantly-changing news updates can be unsettling.

In order to limit what has the potential to be an overwhelming amount of information — some of which could also be inaccurate — choose one, or just a few trusted news outlets to follow on social media, whose content and coverage you find clear and easy to understand.

Instead of going straight to Twitter or Facebook for your daily updates on the COVID-19 pandemic, try browsing official websites instead — where data should be up-to-date and accurate.

Know any doctors or medical professionals? Go straight to the source. They will be able to share more accurate information than the content that tends to circulate around Whatsapp groups, for example.

Although remote working has been overwhelmingly criticised in studies for generating feelings of loneliness, different studies have also proven that it can also damage our productivity.

In a less-structured environment, ordinary distractions — such as social media — may seem more interesting, the study shows.

To combat the temptation of being distracted, schedule organised breaks that will give you a time window to scroll social media and seek information or contact friends.

If deleting or deactivating social media accounts seems like a daunting option at such an isolated time, replace the time you would spend scrolling with other activities, such as exercise.

In an article in the New York Times, physical therapists recommended physical movement as much as possible while we are locked down in our homes during quarantine, as a means of maintaining both our physical and mental health.

Every time you reach for your phone to scroll, do 10 push ups instead. Try it.