iPads, Facebook & Guinness – building an exhibition for the 21st century 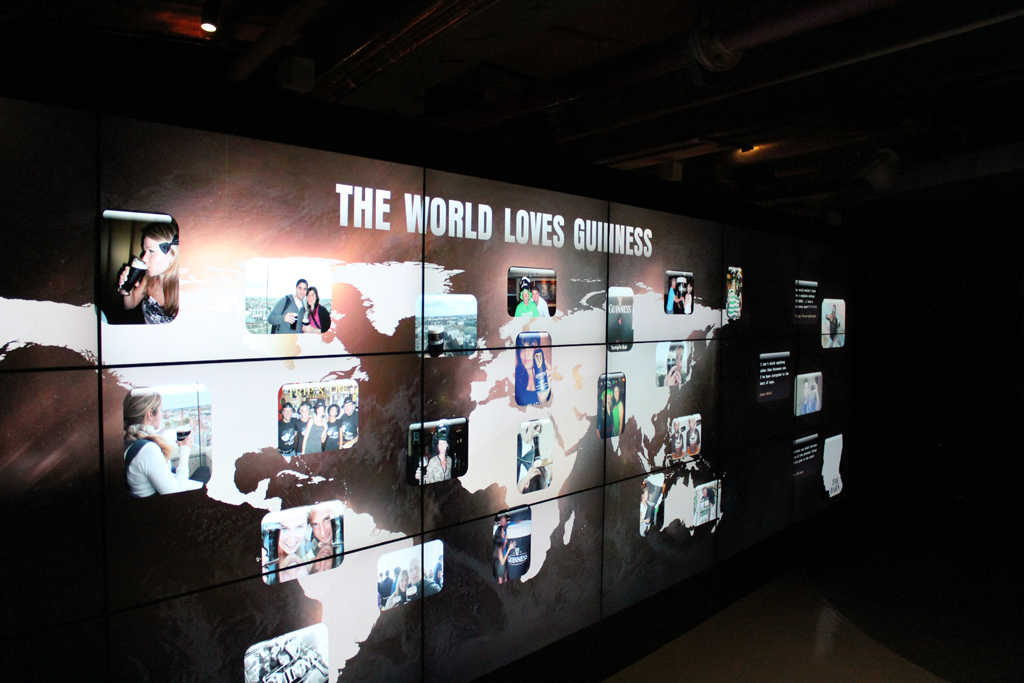 One of the highest definition displays in the world - in the Guinness Storehouse
6.03Kviews

At over 250 years old Guinness is a company that revels in its traditions – but it’s not one that is stuck in the past.  With a budget of €10 million and a deadline of three years Guinness is working on a revolution in digital exhibits.  The first part of the process has been to refit the company’s Dublin Storehouse’s global-themed fourth floor with dozens of networked iPads and 21 of the world’s most advanced digital displays.

The Guinness Storehouse is Dublin’s top visitor attraction – and this was no more visible than last week when, on a cold October evening long after visiting hours had ended, the attraction was heaving with people.

On the second floor digital media and industry experts gathered for the NDRC’s Long Debate while on the fourth Guinness was holding the official launch of its latest digital attraction.  The other floors hosted various private functions for retirees and birthday revellers.

Stepping onto the fourth floor is like stepping into the world’s largest infographic.  The walls of the floor display Guinness related facts and figures in multiple languages (this is the Global themed floor after all) with the help of dozens of iPad 3s that are literally embedded in the walls and some of the world’s most powerful high definition screens.  These iPads and screens bring the infographic elements to life, allowing visitors to interact with Guinness’s 253 year history.  Turn around and surrounding the central vault are dozens of other iPads showing photographs of visitors to the Guinness Academy – where patrons are taught to pour the perfect pint.

We asked Tribal DDB, the digital agency behind the digital refit why the company had opted for iPads over more common types of touch screens used in other exhibits.  They explained that Apple’s iPads provide the company and users with a number of advantages over more common exhibition level technologies; the most important of which is familiarity.  The general public is largely used to and comfortable with using iPads.  For the exhibit’s developers using iPads simplifies the development and updating process while keeping costs down.  iPad app development skills are plentiful, especially in Dublin, while the relative low cost of the devices means damaged or older devices can be replaced quickly.

The iPad ecosystem also allows developers to make small incremental or seasonal changes to the user experience and propagate changes to all devices easily.

Around from the infographic wall and the Guinness Academy stand 21 HD screens emitting 22 megapixels of data.  Put together, these bezel-less screens make one of the highest definition displays in the world.  To put the total system in context – it displays 4.7 gigabytes of data, which is same total capacity of a DVD – each second.

Described as a ‘Community Map’ the wall connects to users’ Facebook pages to allow them to post messages to their own walls, which are then displayed on the HD screens.  Using the Facebook API the HD screens display each users’ message over their home country on a large 3D projection of the globe.

Guinness Marketing Manager Lisa Fitzsimons said the new exhibition was an exciting benchmark for innovation for tourist attractions. She added that Guinness will be investing over €10 million in the Storehouse over the next three years – some €2.5 million was invested in the fourth floor alone – which will see “more groundbreaking technology integrated into the building.”

Paul Carty, the Managing Director of the Guinness Storehouse, said that the developments made on the fourth floor are part of the company’s efforts to “future proof the building” and to create a “benchmark for physical and digital experiences.”

The Head of Tribal DDB Dublin, Mark Brennan, hinted at some of the developments to come;

“We have been lucky enough to work with a client who shares our vision and passion for innovation and this is reflected in the work that has been delivered to date.”

Check out the exhibition here.