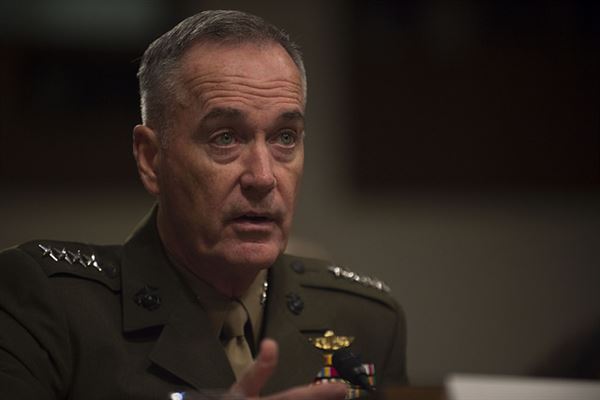 Joint Chiefs of Staff Chairman General Joe Dunford fields questions on how the US military needs to have a competitive advantage over China in the field of AI.

In a streamed interview during the Washington Post‘s Transformers: Defense Summit on December 6, foreign affairs columnist David Ignatius asked General Dunford about how the US can maintain a competitive advantage over China when it came to AI.

“How do you see AI transforming your business of military power and whether you worry that we’re not doing enough, given its apparent importance to get our focus on meeting this Chinese challenge?” Ignatius asked.

General Dunford echoed the words of Defense Intelligence Agency (DIA) Director Lieutenant General Robert P. Ashley, Jr, who said in October that one of the biggest decisions that the United States military will have to make is how to deal with the “integration of humans and machines” that China is pursuing.

The Joint Chiefs of Staff Chairman went on to explain that the US military’s competitive advantage in AI has been reduced over the past decade.

“We are clearly in a competition for competitive advantage, and without exaggeration I can tell you that our overall competitive advantage has reduced over the past 10 or 12 years. Ten or 12 years ago whoever was sitting in my seat could have said that we are uncontested in all domains, uncontested in our ability to project power when and where necessary. I can’t say that today.”

General Dunford then responded to the concerns of big tech employees at Google, Microsoft, and Amazon who have rebelled against their employers for what they consider “unethical” use of technology.

“What would you say to Google employees if they were watching this streaming, or employees at Microsoft or Amazon for that matter? What would the chairman of the joint chiefs of staff say about the need for this brainpower?” Ignatius asked Dunford.

“We are the good guys and it’s inexplicable to me that we would make compromises in order to advance our business interest in China where we know that freedoms are restrained, where we know that China will take intellectual property from companies — strip that away, put the companies in the dust bin of history and then use that intellectual property for their own advantage.

“We know those things are taking place, and so it’s inexplicable to me that we wouldn’t have a cooperative relationship with the private sector.”

He went on to say the the US military has benefitted from the public sector for decades and that “one of the competitive advantages the US military has enjoyed for decades has been the public partner, private partnership where we have been able to leverage the full human capital and the ideas of the American people, and if we don’t have access to that, we are not going to be competitive.”