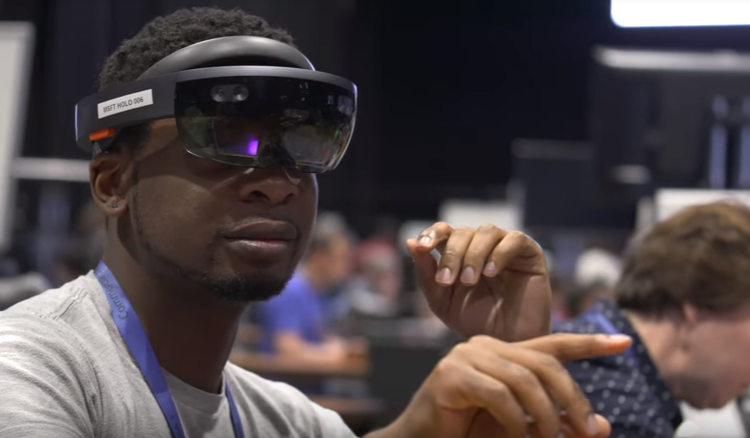 At this year’s fourth annual Microsoft Sync Week in April, 644 people from 46 different countries hacked together in teams on unique customer challenges, including HoloLens collaborations.

Microsoft’s Sync Week is put on by its Commercial Software Engineering (CSE) team, which has set itself apart by working directly alongside its customers through a process called Open Hacks.

Read More: Open Hacks: understanding customers by working alongside them

The hacking teams at this year’s CSE Sync Week leveraged the latest in Microsoft tech to take on 50-plus specially selected projects, each undertaken with the expectation of immediately driving value for third-party partners.

Among the technologies hacked were:

“We send our own developers to work side by side with our customers to build technology that solves their biggest problems together. And in doing so, it has transformed the way we do business entirely,” Microsoft Technical Communications Director Dan Behrendt, wrote in a recent article on Entrepreneur.

This technology is particularly useful when it comes to collaboration among teams whether the people are physically present together or not.

At CSE Sync Week, the teams leveraged the HoloLens on a Mixed Reality Remote Assistance project. A very common use case that Microsoft hears from partners is that when they are doing something on the HoloLens, they are able to look at something in their own space while somebody thousands of miles away can drop a 3D model in their space, and everyone can collaborate on the same project in real-time.

These types of collaboration using Mixed Reality were highlighted in Season Two of Microsoft’s DECODED Show on YouTube.

One team was transforming the world of medicine while another was changing the way we visualize the complex industries of oil and gas.

The Microsoft HoloLens Mixed Reality headset is also helping cancer researchers across disciplines collaborate in real-time in order to come up with better cures faster.

The collaborative function of the HoloLens has garnered praise from those who work directly with it in the medical field.

“I think the thing that stands out with HoloLens, at least in our experience with it, is the ability to look both at the data and at the people at the right time,” said Alex Sigaras, research associate in computational biomedicine at the Weill Cornell Medicine in New York.

“I would say that each member has a key contribution to their field and to the team, and devices such as HoloLens allow us to keep everybody on the same page,” said Sigaras in an interview with DECODED CHAT.

“We helped them develop a machine learning algorithm, so that a golfer can figure out their best course of action and how to get from tee to cup in the best possible way.”

Another project led by the Microsoft CSE team involved making sense out of handwritten documents. Many documents are handwritten, and searching through them to find keywords and subjects of interest can be an extremely laborious task when done manually.

According to the Microsoft CSE team, “One of the great advantages of the shift from physical to digital documents is the fast and effective search and knowledge extraction methods now available. Gone are the days of reviewing documents line-by-line to find particular information.”

Data scientists Patty Ryan and Tingting Zhao note on the Microsoft Developer Blog that some of the main challenges in achieving acceptable extraction accuracy when applying traditional search and knowledge extraction methods to handwritten documents are poor document image quality and handwritten annotations.

The team; however, leveraged a service called Microsoft Cognitive Services that was able to save researchers “hours of review time” when applied to handwritten documents.