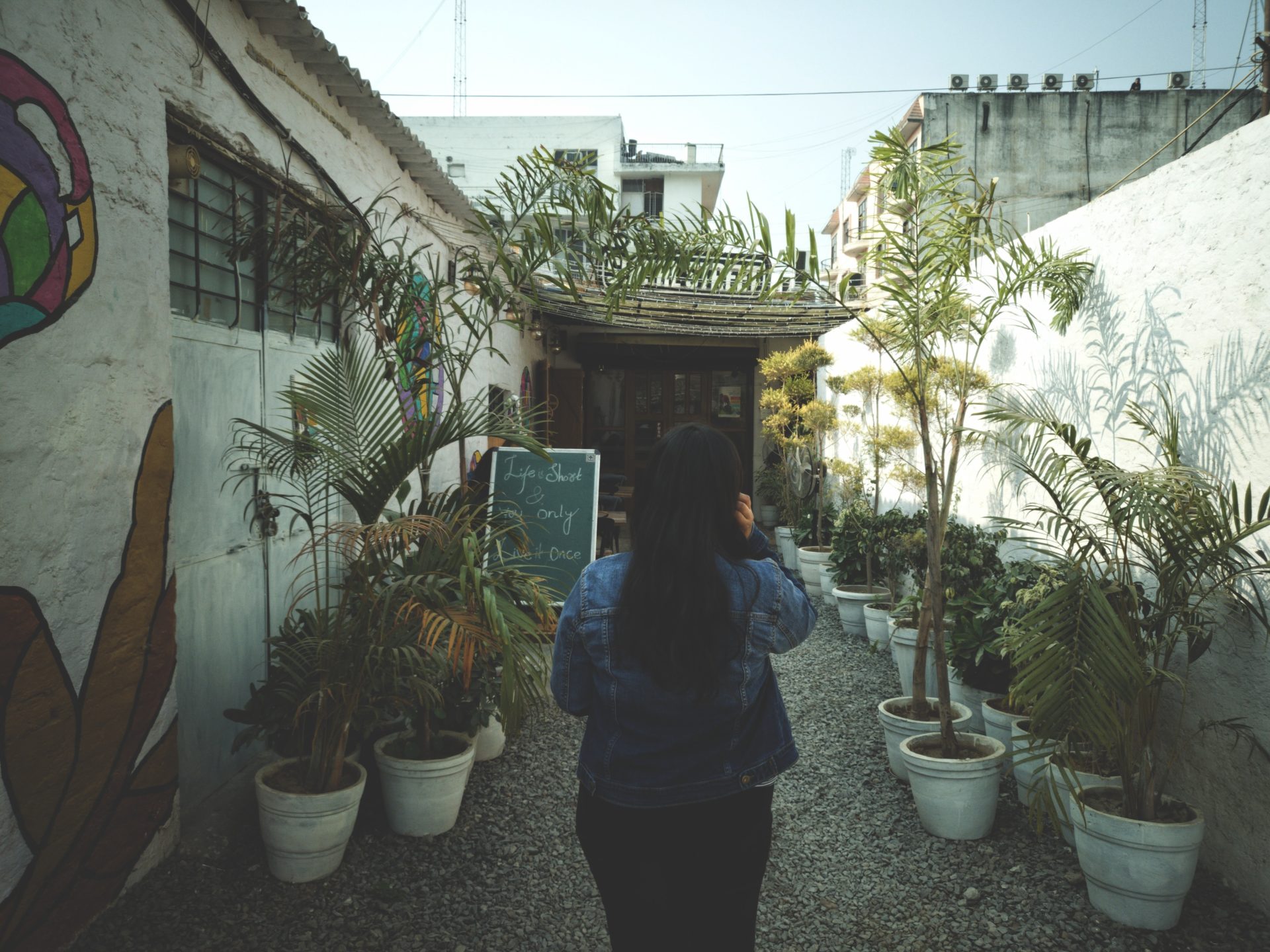 Six leading startups focused on socially conscious innovation will compete in front of a panel of distinguished media judges at Connect: Impact on Wednesday, December 2 from 1PM – 2:30PM ET.

The competition will also feature an open Q&A session between audience members and the media judges, and entrepreneurs and innovators are encouraged to register for free here to participate. 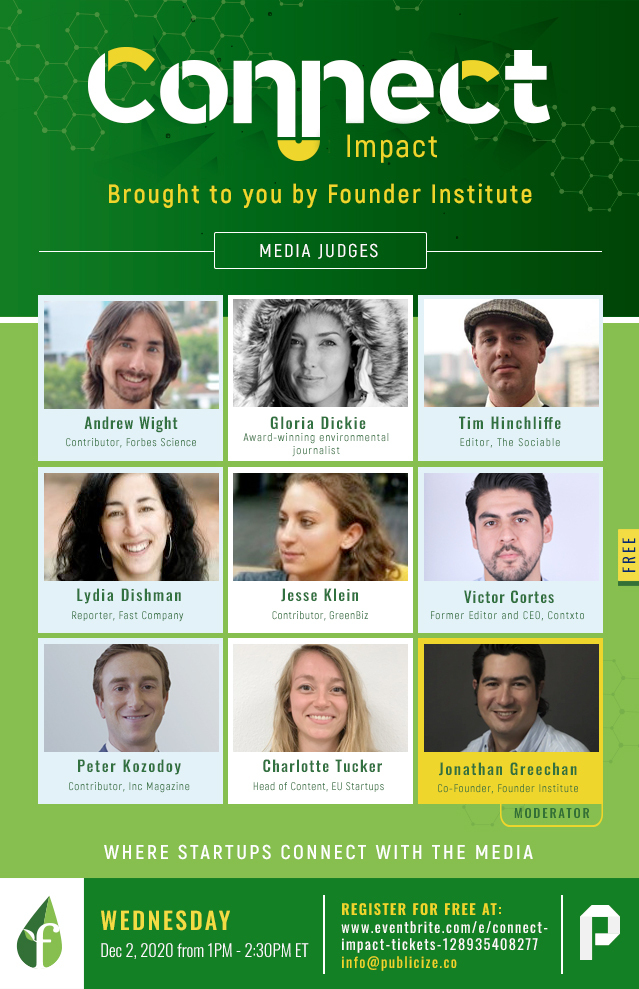 The novel coronavirus pandemic has exacerbated societal and environmental weaknesses across the globe, and corporations and entrepreneurs are taking note. In a recent article for the World Economic Forum, Salesforce’s head of global impact engagement wrote, “In the light of the pandemic, it is increasingly clear that corporate longevity is intrinsically tied to how a business addresses environmental and social challenges for all of its stakeholders.”

Many companies are using the United Nations’ 17 Sustainable Development Goals (SDGs), which were announced in 2015, as a reference point for where the world must end up to avoid cataclysmic consequences due to climate change.

Founder Institute is one such company. In August the accelerator — which operates in over 200  cities and has an estimated portfolio worth of $30 billion — announced its “Joint Pledge for Responsible Innovation,” a pact to support entrepreneurs that build “Impact Companies” tackling SDGs such as extreme poverty, ending world hunger and achieving gender equality.

The company also launched its FI for Good initiative, a series of programs and fellowships aimed to inspire entrepreneurs of varied backgrounds to launch technology companies that “aim to solve some of the biggest problems of humanity.”

The Connect: Impact event on December 2 will feature a number of startups from the Founder Institute portfolio that focus on socially conscious innovation:

Ovamba is a fintech company working with banks in emerging markets to provide micro-finance options to entrepreneurs and small businesses. The company operates out of the United States, Cameroon Ivory Coast and India, and was named by Fast Company as a Top 10 most innovative company in Africa.

Fairly.ai created a tool that allows organizations to audit their artificial intelligence (AI) systems from across all business units, to eliminate bias, protect privacy, and ensure transparency of automated decisions. The Canadian company was founded by David Van Bruwaene and Fion Lee-Madan.

DotX is another company solving the world’s financial inclusion problem. The Jakarta-based startup has created a payroll solution so workers without bank accounts can receive salaries to make banking transactions using a mobile app. 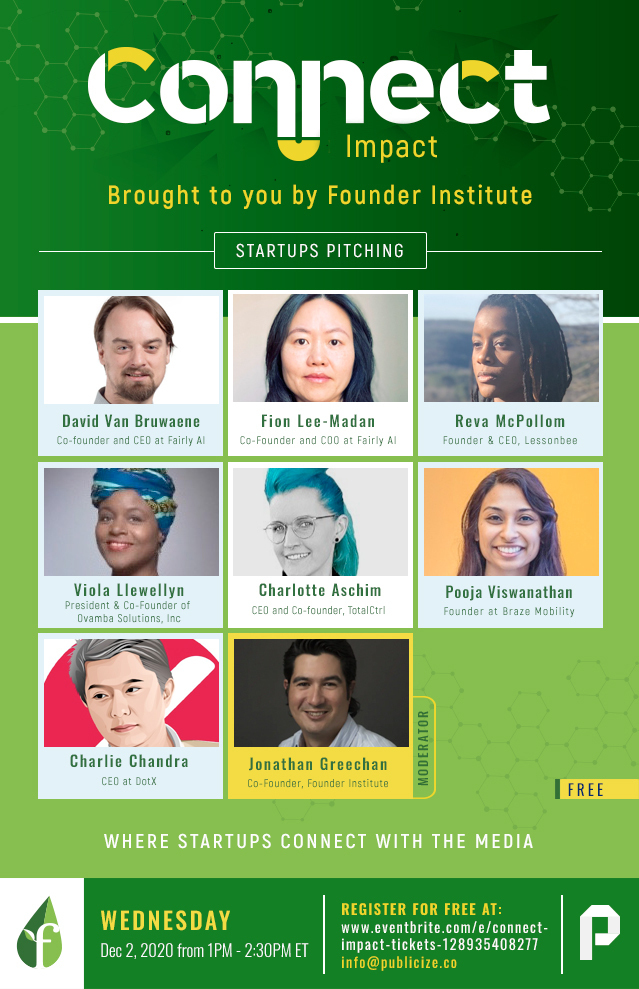 The competition will also be moderated by Founder Institute Co-Founder Jonathan Greechan. Those interested in attending can sign up for free on Eventbrite.