HomeTechnologyStepping into the cleats of blind soccer players with VR
Technology 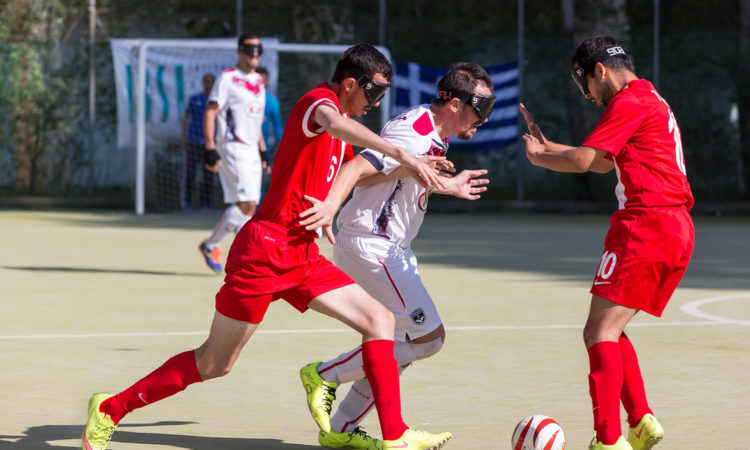 Toyota Sweden has come up with a Virtual Reality (VR) sporting experience that helps those without visual impairment to learn about how it feels to play blind soccer.

If you have ever wondered how a visually impaired soccer player plays, VR gives you a chance.

“It is difficult, probably impossible, for anybody without a visual impairment to fully understand how it is to live with it, but this VR game gives at least a small hint”

“The VR game ‘creates’ a realistic visually impaired scenario and gives a feeling and understanding for how it is to play the sport when our visual sense isn’t working.

“It is difficult, probably impossible, for anybody without a visual impairment to fully understand how it is to live with it, but this VR game gives at least a small hint,” he says.

How Real Does the VR Soccer Game Feel?

“The role of technology in sports is always a hot issue, but is perhaps more present when it comes to the Paralympics because of the more visible connection between person and machine”

In the VR game, which claims to be the first of its kind, the user or player aims and shoots at a real football goal, but the experience of having visual impairment is simulated through VR. Geimer is a consultant at the Skåne University Hospital Eye Clinic and national qualifier of blind-sports. Her expertize was used to develop a realistic and lifelike VR experience.

She has tried to translate the different impairments through the VR game, so that the user gets a true understanding of what each type of impairment looks like.

“I’ve worked with blind-sports a long time, and I’m still impressed by the accomplishments of these athletes. It’s not easy to visualize these impairments to people with full sight, but the result is far more realistic than I thought was possible,” she said in a press release.

Gustafsson, who has tried the game himself, says that he found the experience truly mind broadening.

VR empathy has been praised often since it allows users to experience any situation from any point of view. According to a 2018 Stanford study, participants who became homeless in VR had more positive, longer-lasting attitudes toward the homeless and signed a petition supporting the homeless at a significantly higher rate than participants who performed a traditional perspective-taking task.

As Jeremy Bailenson, a professor of communication and a co-author of the paper, told Stanford News, “Experiences are what define us as humans, so it’s not surprising that an intense experience in VR is more impactful than imagining something.”

Read More: VR is shifting how we experience anxiety, surgery, pain, and games

As such, the VR soccer game will bring the user closer to the experience of playing this game by relying on not the visual sense but on other senses. It’s a case of building effective VR empathy.

Fatmir Seremeti, captain of the Swedish National Goalball Team says, “I think it’s a very thought through and smart way of showing an impairment, where you not only point to the impairment itself, but also show the possibilities that come with having a visual impairment. You don’t have to quit football, and you can absolutely be a part of- and achieve – amazing things, and experience the whole world.”

Seremeti talks about his experience as a visually impaired parasport athelete here.

We are enjoying playing a bit of blind football as part of our sports morning. Trying to listen for the bells behind all the amazing cheering! #blindfootball #aspiretoachieve #determination #paralympicsport @ParalympicsGB pic.twitter.com/nsO8JCjlip

Toyota is a global sponsor of the Paralympics and the Swedish Paralympic Committee, where a part of the Swedish sponsorship is to raise awareness for parasports, to increase the number of active athletes. Also, as a part of Toyota’s Mobility Foundation initiative, the automobile giant aims to support and highlight people living with impairment.

“We’re working together with the Paralympic Games to make a more inclusive society. Toyota aims to encourage creating a peaceful society without discrimination through sports and is committed to creating a sustainable society through mobility,” Gustafsson says.

Technology for Parasport Athletes, Now and the Future

Technology matters to para-sports athletes, because a good piece of technology can often mean that extra bit of mobility that they can achieve, or somewhat more ease in playing a sport.

Ben Lucas, a Senior Lecturer in Prosthetics and Orthotics at the University of the Sunshine Coast, says, “The role of technology in sports is always a hot issue, but is perhaps more present when it comes to the Paralympics because of the more visible connection between person and machine.”

Toyota’s Toyota Mobility Foundation strives to improve the usability, affordability, and quality of mobility products and services for underserved, vulnerable populations such as people with disabilities and others.

“Our commitment to create a more inclusive, better and more mobile society goes beyond the sporting field. We want everybody to be able to move and we want to enable more people to go more places,” he says.

In 2018, Toyota offered a challenge for innovative ground-breaking technology to assist people with lower limb paralysis with a prize pool of US$ 4 million.

Para swimmer Rebecca Dubber says wheelchair technology has improved over the last two decades. Technology has brought down the weight of wheelchairs to 7 kgs, using a combination of carbon fiber, titanium, and aluminum, instead of the previous alloy and steel wheelchairs. Electronic smart drives are also available that clip onto the chair providing much of the motive power.

Cameron Leslie, a triple Paralympic gold medalist in swimming says prosthetic legs used to be pretty basic, with free swinging legs. “Now the prosthetic knees have microprocessor-controlled gyroscopes to mimic the movement of a natural knee,” he told the Paralympics News.

Several technological innovations in prosthetics are expected at the next Paralympics in Tokyo 2020. A firm in Tokyo is crafting customized high-tech wheelchairs for the world’s top Paralympic athletes of Tokyo Paralympics 2020.

The Portuguese Tokyo 2020 Olympic and Paralympic Preparation Program is using a similar technique called Paralympic VR. It is an immersive experience incubated at the iNOVA Media Lab that provides users with a 360-degree video, which transports them to the training environment of Paralympic sports like Triathlon, Football, Basketball, Swimming, and Para Athletics.