HomeTechnologyUS-China tech arms race will give us bases on the moon, more military operations in space
Technology 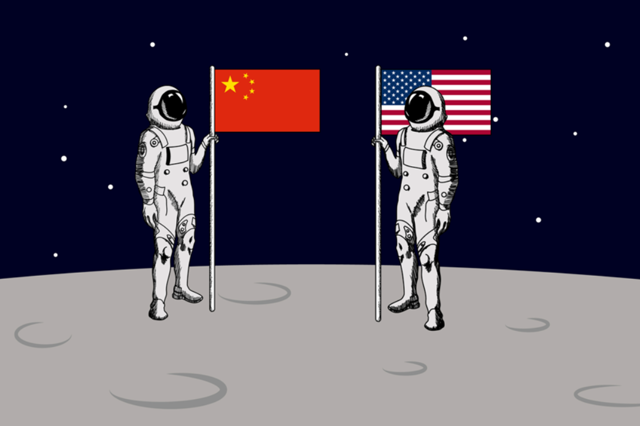 The technological arms race between China and the US will give us bases on the moon and more space-based military operations, according to a former staff director to the late senator, John McCain.

Brose’s new book, “The Kill Chain: Defending America in the Future of High-Tech Warfare,” was the subject of today’s webinar, which focused on US-China relations and space-based technologies for military use.

The potential of losing competitive ground with China is a major reason why the US is investing heavily in space, and the threat of Chinese dominance was one of the many reasons the Space Force was launched.

“China and Russia, in particular, are developing a variety of means to exploit perceived US reliance on space-based systems and challenge the US position in space,” according to a Defense Intelligence Agency report published prior to the official launch of the US Space Force last year.

Brose was on Capitol Hill during the Space Force debates, and according to him, “Congress did not create the Space Force because they believed that things were going well for the United States in space.”

He added, “When you look in full at the military capabilities that China has been developing and fielding, they have purpose-built a military to undermine the assumptions on which the US military has been built, and the way we have planned to operate it for a very long period of time.”

The former McCain staff director listed several technologies that China has quietly pursued over the years, such as:

With regards to China’s technological developments, said Brose, “We weren’t attentive to how much progress was being made systematically year-by-year.”

How could emerging technology shape the US’s response to China’s ambitions for technological supremacy on Earth and in space?

According to Brose, the answer may lie in less manpower and more autonomous networking with few human operators.

“The opportunity of these emerging technologies is to build an almost inversion of our current military, which would take the form of increasingly large networks of smaller, cheaper, more autonomous systems,” said Brose.

“You don’t have to have so much manpower behind every system. You can actually have lots of systems being operated by single individuals because of their levels of autonomy and intelligence,” he added.

“We will have bases on the moon” — Chris Brose

Space may have once been publicly perceived as a place just for scientific exploration and discovery, but it has always been a domain for military operations, with serious plans now in the works to build and maintain bases on the moon.

While some, like the late military think tank researcher William Tompkins, have claimed that there may already be secret bases on the moon, Brose was more future-focused in his thinking when he said today that we will have bases on the moon.

“We will have bases on the moon. We will have manufacturing and supplies based in outer space, and we will be conducting military operations — not just from space to the earth, but in space itself,” he said.

And it’s not just Brose who’s saying there will be bases on the moon.

With the Artemis program, NASA is looking to go back to the moon by 2024, and it has every intention of staying.

According to NASA’s plan for a sustained lunar presence, “Americans will return to the Moon in 2024. Following this 2024 landing, we will develop a sustained, strategic presence at the lunar South Pole called the Artemis Base Camp.

“Our activities at our Artemis Base Camp over the next decade will pave the way for long-term economic and scientific activity at the Moon, as well as for the first human mission to Mars in the 2030s.”

The need to create bases on the moon, and the need to manufacture and deploy space-based technologies have become high priorities for the US military because it can no longer rely on antiquated tactics that have kept America a powerhouse for decades.

“We have, for decades, assumed that space was going to be a sanctuary for the United States and our military” — Chris Brose

Keeping the peace in the space age isn’t just about the US flexing its nuclear deterrence muscles anymore; emerging technologies are changing the way we look at space from a military perspective, which will rely on satellites and space-based weapons, surveillance, and communications tools.

“Space is where the problem is the most acute. We have, for decades, assumed that space was going to be a sanctuary for the United States and our military,” said Brose.

Meanwhile, China has been developing anti-satellite weapons for decades, which could knock out or disrupt American GPS, communications, and weapons control.

Brookings Institution Senior Fellow Frank Rose said in a webinar on May 8, “The United States uses space assets to detect, track, and target potential adversaries. Therefore, [China’s anti-satellite] weapons are designed to negate that US superiority or asymmetric advantage.”

Today, Brose added, “We’re now seeing more satellites launched year-over-year than in entire decades before us, where the heavens are just going to be crowded with increasingly large numbers of small satellites and constellations all over the place.”

And Brose is right — satellite constellations are popping up all over the place.

SpaceX is currently in the process of sending thousands of satellites into space as part of its Starlink mission to beam Internet down to Earth.

Similarly, the Defense Advanced Research Projects Agency (DARPA) recently launched its Blackjack program to support the Pentagon’s own mesh constellation of satellites for the military.

And last week, the United States Air Force held its Hack-A-Sat competition to see who could hack a satellite.

All of these operations point towards major technological disruptions in space where domain superiority is an ongoing battle between the US and China.

“Space is critical to just about everything we do here on Earth,” Rose said on May 8.

“It facilitates global navigation like things through the global positioning system or GPS. It enables communications, allows the military to detect, track, and target adversaries. It helps us verify arms control.”

“If you can deny the United States and its allies access to outer space, you can achieve significant military advantage here on Earth,” he added.

Just like the Cold War between the US and Russia ushered in a wave of space innovation and exploration that brought us to the moon over 50 years ago, the tech arms race between China and the US is taking us back to our nearest heavenly body to establish a permanent lunar presence.