HomeTechnologyWho will benefit from Microsoft’s $1.1B tech investment in Mexico
Technology 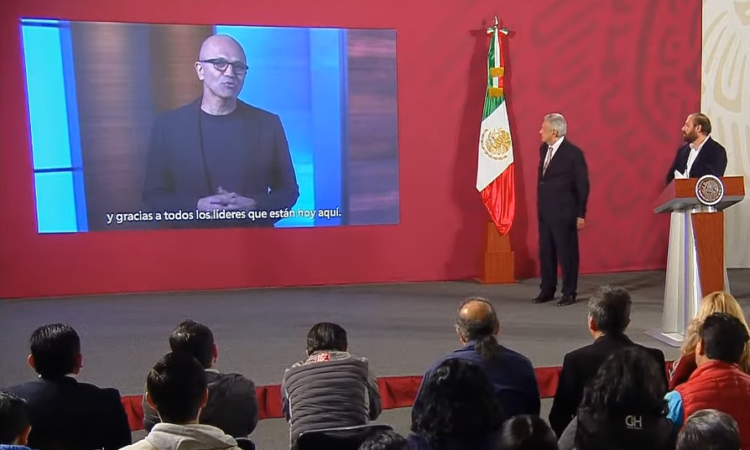 Microsoft’s announcement of a five-year ‘Innovating for Mexico’ investment plan worth $1.1 billion looks to benefit key demographics of the Mexican population.

Mexico’s head of state told journalists in a press conference on Thursday that he was pleased with the “good news” that Mexico was awarded the investment over other countries the company was considering.

Microsoft’s recent investment comes in addition to work the company has already done for technology in Mexico, where it employs over 156,000 people in the field, has trained around 15 million in new technologies, and also operates a center for cyber security.

In a pre-recorded video statement played at the conference, Microsoft CEO Satya Nadella explained that the program’s objective would be to drive economic growth through technology across Mexico, via the expansion of “access to digital technology for people and organizations.”

But exactly which people and organizations?

Microsoft plans to construct its first ever data center in Mexico which the company claims will benefit small and medium-sized businesses, as well as both public and private institutions.

Through the cloud services it will offer, Microsoft pledges to provide support for open source solutions, with the ultimate goal of boosting the development of a “secure, accessible and scalable tech ecosystem in Mexico.”

For university students studying any degree, Microsoft is designing a new educational program which will teach the most up-to-date technological skills.

Within the program, the company plans to build three new training laboratories, all equipped with the latest technology.

Alongside this, Microsoft will offer ‘virtual classes’ in public universities across the country, to enable as many young people as possible to have the chance to innovate.

Microsoft also intends to put together an advisory council, which will be made up of the leaders of some of the largest companies across the country.

The company hopes that these managers will be able to share their experiences of digital transformation in order to better meet the needs of Mexico’s tech market.

According to Microsoft, the objective of this council will be to exchange best practices, monitor the progress of the country’s digital transformation and improve tech employability.

The final part of Microsoft’s ‘Innovating for Mexico’ program commits to furthering sustainability.

As part of its company-wide ‘AI for earth’ program — which explores the ways AI can contribute to solving the world’s most pressing environmental challenges — Microsoft has pledged to support the Mexican NGO Mexico Azul, which works to preserve habitats and marine species.

Specifically, Microsoft intends to focus on the preservation of the shortfin mako shark, an endangered species that can be found on Mexico’s Pacific Coast.

The company will monitor these sharks using open source software, which will use artificial intelligence to individually identify each shark and record information about their habits and migratory routes.

Microsoft investments in other countries

Microsoft’s expansion of its global reach has led the company to open at least seven development centers worldwide, including India and Africa, where last year it announced a five-year plan to open a technology development center worth $100 million in Nigeria and Kenya,  according to Reuters.

Alongside their work, the hubs also support Microsoft’s other business ventures, which include Windows, Office, and Azure.

Being an investor looking for a return on investment, Microsoft itself also benefits from these types of investments where the tech giant’s hardware, software, and services are deployed.