HomeWebAncient Aleppo history, poetry and tragedy in the face of incendiary bombs
Web

Ancient Aleppo history, poetry and tragedy in the face of incendiary bombs 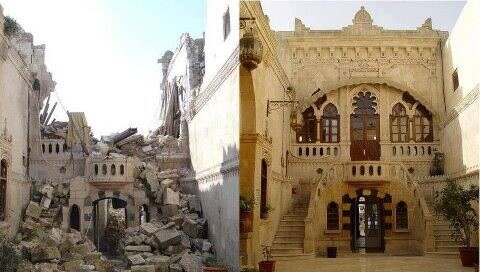 Human Rights Watch reports that Russia is bombing Aleppo with “illegal” incendiary explosives while UNESCO World Heritage sites are being buried beneath the rubble.

As if so-called traditional bombing campaigns weren’t horrendous enough, Human Rights Watch (HRW) has condemned Russia’s use of incendiary bombs in Syria, an action that is in violation of international law.

Incendiary weapons, as the name implies, not only kill — they burn people alive. That is what is being reported in Syria’s northern city of Aleppo today as Russian and Syrian bombers use bases in Iran as their launching point. It is the first time Iran has allowed a foreign nation use its territory for military operations since 1979.

“The Syrian government and Russia should immediately stop attacking civilian areas with incendiary weapons,” said Steve Goose, arms director at HRW. “These weapons inflict horrible injuries and excruciating pain, so all countries should condemn their use in civilian areas.”

According to the Geneva Convention on Certain Conventional Weapons, Protocol III:

1. It is prohibited in all circumstances to make the civilian population as such, individual civilians or civilian objects the object of attack by incendiary weapons.

2. It is prohibited in all circumstances to make any military objective located within a concentration of civilians the object of attack by air-delivered incendiary weapons.

Apart from the horrendous civilian casualties of the ongoing, anything-but-civil war, the ancient city of Aleppo is having its priceless World Heritage Sites bombarded off the face of the “cradle of civilization.”

Syria’s 4,000 year-old history is our history

With a country and culture that goes back to the beginning of civilization, Syria’s past is our past, and that history is being wiped off the face of the Earth.

In the West, we are taught very little about our origins, and instead we dive right into Greek and Roman history, and if we’re lucky, a brief overview of Egypt. However, ancient Mesopotamia is still an enigma, and the little we are taught about the “fertile crescent” or “land between rivers” is overshadowed by images of war, beheadings, and ruthless dictators. The history is so repressed that even Hollywood won’t touch it.

According to the World Heritage Convention, “The old city of Aleppo reflects the rich and diverse cultures of its successive occupants,” and that “Aleppo was ruled successively by the Hittites, Assyrians, Akkadians, Greeks, Romans, Umayyads, Ayyubids, Mameluks and Ottomans who left their stamp on the city.”

The Hittites reigned over Syria during a “Golden Age” from 1400-1200 BC and are credited as “the first peoples to successfully smelt iron ore, which they kept a closely guarded secret, and whose products they sold at a premium (Assyrian records valued iron at 4 times that of gold).”

Aleppo was once a thriving metropolis with a strategic location that made it a commercial and cultural center unmatched anywhere in the world.

The American Association for the Advancement of Science (AAAS) describes Aleppo as a “commercial hub and a trade center that began in the 2nd millennium BC and reached its peak during the 16th-18th centuries AD.”

Syria is a country so steeped in rich history that its bombardment is not only a horrendous act against the lives and dignities of the people who call it home, but it is also the destruction of our own past. Everyday, bombs are blasting away at the edifices of a once-glorious past.

Apart from the stunning medieval architecture that is being destroyed, the living culture, the people, the lifeblood of Syria is being silenced. Syria is home to some of the world’s greatest poets, and the current conflict has given rise to some of the most heart-felt written verse the world has seen.

Dima Yousf, a Syrian Palestinian born in 1986 who graduated from Damascus University with a degree in Arabic literature, writes

Oh, if only the years were edible,
so that the starving would chew them,
and spit the bitter taste in our faces.
Oh, if only The Lord would see
the protruding bones of children,
and would do something,
anything,
so that we wouldn’t lose faith.
Oh, if only my heart were a god. –

Here’s another verse from the poet Al-Ma’arri, who is quoted at the beginning of this article:

I bid each day farewell, aware its like,
Once gone from me, will never more return.
Ill-starred are easy ways on which the careless stroll,
Although they rank their lot a happy one.
For me, it’s as though I ride an old and jaded beast,
When outstretched on a bough
The lizard basks in the blaze of noon.
Death stalks the night when friends and enemies sleep on,
And ever is afoot while we recline at ease.
Al-Ma’arri

Finally, from a Hittite military servant, Puhanu, from around 1700 BC about crossing the Taurus mountains to wage war in Syria:

Why have you acted thus upon me and bound this yoke on me?
I come carrying ice in this basket and waging war
And I will destroy the lands with this very arrow and you (arrow) will
reach their hearts