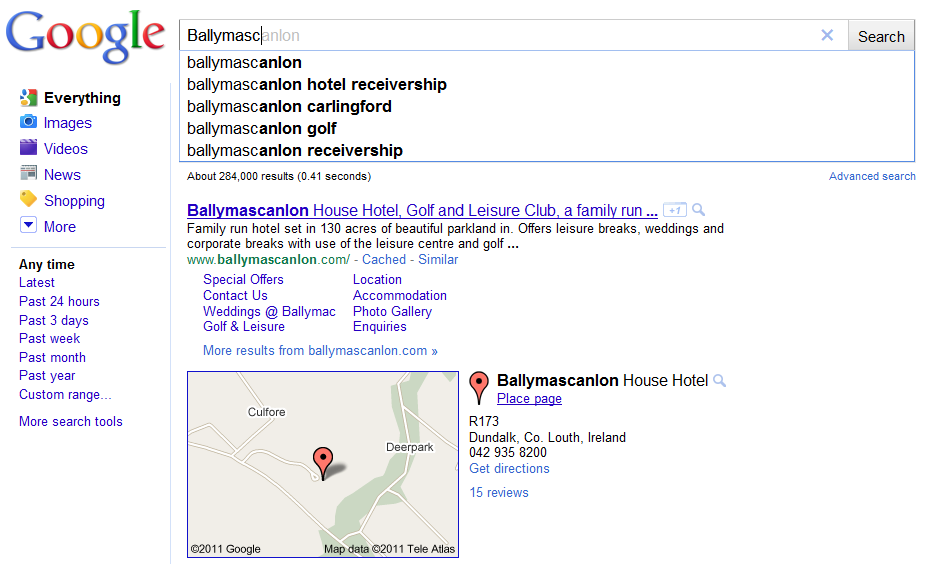 The owners of Ballymascanlon House Hotel have begun legal proceedings against Google Ireland because one of five auto-complete suggestions for its name wrongly suggests the hotel is in receivership.   In the case the Hotel is seeking to prevent Google from displaying the search term and is not looking for compensation.

Speaking to Silicon Republic Chris Brayden, the General Manager of the hotel, said, “We would have brides looking to book 2013 weddings and it’s very hard for them to decide to pay a deposit in confidence when they see that we’re possibly in receivership and we’re not.” 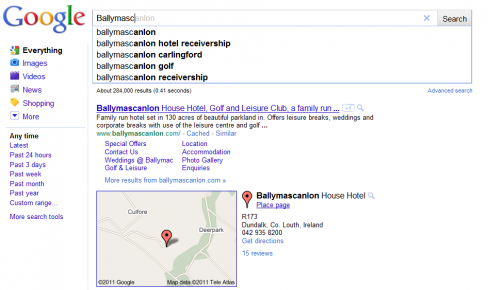 The case was lodged to the court on May 30, after the Hotel made several attempts to contact Google, including sending three lawyers’ letters, asking for the offending search suggestion to be removed.

Writing on Google’s Webmaster Central forum the Hotel’s financial controller Rachel Russell said, “Having these words appear [“ballymascanlon hotel receivership”] as a prompt implies that there is a lot of evidence of the Hotel being in financial trouble or receivership. This is not so but it has had an effect on business confidence and has caused our customers to ask questions about us. Please remove this prompt as there is no evidence in any Google search of the Hotel being in receivership.”

One forum poster even suggests that the autocomplete suggestion is part of a smear campaign against the hotel.

The case has not yet been heard in court but there could already be some difficulties; Google Ireland is named in the case but the company could argue it does not operate Google’s search results.

Writing on his law blog TJ McIntyre goes into more detail on this, “I was surprised to see Google Ireland named as a defendant, as I understand that Google’s search functions are run by Google Inc., California – a distinction which tripped up the Red Cross in their action seeking to identify a blogger hosted on Google’s blogspot. In that case the Red Cross eventually had to seek the permission of the court to substitute Google Inc. as the defendant, and I’ll be interested to see whether this happens in this case also.”

In its defence Google says that the autocomplete suggestions are generated from common search terms, “As you type, Google’s algorithm predicts and displays search queries based on other users’ search activities.

“Predicted queries are algorithmically determined based on a number of purely objective factors (including popularity of search terms) without human intervention. The autocomplete data is updated frequently to offer fresh and rising search queries. ”

As of Wednesday 16 June the suggestion still appears in Google search.  According to the Courts’ Service website no date has been set for the case.

Ireland’s Magnet Networks to serve up Wimbledon finals in 3D