Delegating: Effective management or a lazy way to dump responsibility? 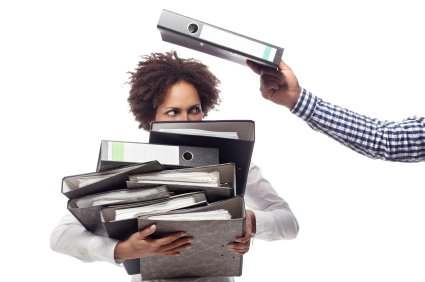 Delegating is a concept that usually has polar reactions depending on who’s giving and receiving it. It’s either an effective method for streamlining duties, or a lazy way to dump responsibility.

“Leaders who are strongest at delegation are those who are dedicated to using the tasks that come across their desks as development opportunities for others.” — Clemson Turregano, Center for Creative Leadership

The greatest leaders in business, military, and politics have all had their opinions on delegating effectively, so that talents are utilized where they count the most.

Delegating has evolved from a strictly chain-of-command method, where a hierarchical structure delegates duties from the top down, to a more integrated approach where the tasks are assigned to the appropriate employees’ strengths and skills.

Knowing how to delegate can save on time management, accelerate growth, and boost team morale when used and credited efficiently. With the rise of Customer Relationship Management (CRM) tools, delegation can be automated to ensure that no talent goes to waste while all tasks are completed in a timely manner. But how do you know when to delegate and when to take matters into your own hands?

According to Daniel Barnett, Founder of WORKetc, “There are three basic questions that you need to ask yourself in order to identify whether or not you need to delegate a task:”

Barnett, whose WORKetc CRM task management solution handles over 1,200 customers, believes that “effective and efficient delegation is a skill that every entrepreneur needs to learn.”

“Never tell people how to do things. Tell them what to do and they will surprise you with their ingenuity.” – General George S. Patton, Jr.

As the above General Patton quote suggests, people can surprise you when entrusted to not only fulfill obligations, but even to go above and beyond what was expected.

One of the common mistakes facing entrepreneurs is trust. For entrepreneurs, their businesses or startups are their babies, and many fall into the trap of believing that nobody can better take care of their babies than themselves.

A lack of trust in employees can lead a boss to become a micro-managing control freak, whereas if trust in delegation were applied correctly with the proper recognition, it can “inspire loyalty, provide real satisfaction for work done, and become the basis for mentoring and performance reviews,” according to Startup Professionals Founder and CEO Martin Zwilling.

Understanding the disasterous psychology of lazy delegating and procrastination

Delegating lazily can fall into a couple of categories. One is not taking the time to give clear instructions. This is a sure-fire way to failure; however, another form of laziness is procrastination. Fortunately, most founders by nature don’t suffer from procrastination, but on the other hand their mid-level employees have a greater chance of falling into such a trap.

Mid-level employees and even upper-management have a more comfortable and stable salary than those below them, and they do not think of the company as their “baby” like the founders do. This can lead to complacency and the desire to pass on tasks that they deem “less important” to those working under them as the sort of hierarchical structure mentioned earlier.

On the other hand, people with a higher position in the company are often under overwhelming stress to get things done that they don’t even know where to begin, and this leads to procrastination by quickly delegating numerous tasks without much instruction.

This approach is doubly-lazy and ineffective in that instructions are not clear while whomever the task is being delegated to is not treated with the proper recognition.

“The best executive is the one who has sense enough to pick good men to do what he wants done, and self-restraint to keep from meddling with them while they do it.” – Theodore Roosevelt

In business, CRM platforms like WORKetc, which was crowned ICT Business of the Year at Optus My Business Awards 2016, can help streamline numerous tasks among all divisions of a company. That way each employee knows what needs to get done and when. Everyone knows their responsibilities, and the platform automatically takes care of some of the lesser, albeit important, practices of following-up.

In general trust and recognition coupled with clear instructions and follow-ups, should allow you to delegate effectively.

Simply put, to delegate with efficiency means communicating exactly what needs to be done, putting trust in the person delegated to, so that he or she feels confident as a special part of the team. Checking in on progress and providing guidance when needed, and finally rewarding those who did the task with written or verbal recognition are all good practices. These practices help boost morale, productivity, and set a precedence for a smoother delegation process the next time around.