HomeWebInternet Explorer 9: Why ie9 will be good for the web, and us
Web

Internet Explorer 9: Why ie9 will be good for the web, and us 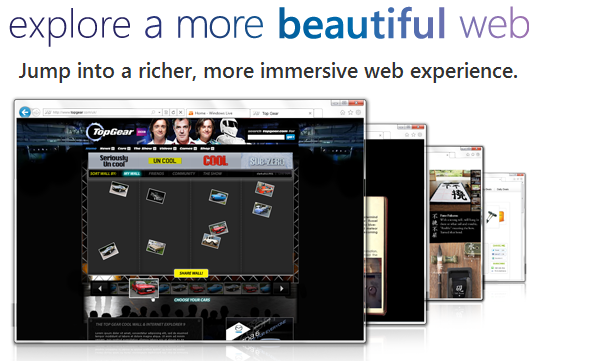 It has been billed as the safest, the fastest, the most beautiful and “a game changer”.  But however Microsoft pitches Internet Explorer 9 it is obvious that it is entering a very different environment to its predecessors.

Today ie9 was released across the world but this will not be the easy browser release Microsoft is used to.  All versions of IE are losing market share at remarkable speeds.  To the year ending January 2011 all versions of Microsoft’s ie browser lost 10% of the global market.  And it did so almost exclusively to Google’s Chrome browser, which saw a 13% increase in the same period.

This, of course, should not be.  Microsoft’s Windows is still the dominant personal computing OS (despite what Apple’s iOS would like us to believe).  What is worse is that the dwindling use of ie is not a result of Google or Mozilla’s greater marketing efforts.  Mozilla has long delayed its launch of Firefox 4 and Chrome has attempted to wash over user’s concerns for data privacy.  Neither Safari nor Opera have been able to break free of their fanboy audience to the wider market.

To be fair Microsoft has been a victim of its own success, its ten year old ie6 browser is still in use – despite its aging support for modern web standards and numerous security issues.  And with Google no longer supporting ie6 and only supplying limited support for ie7 Microsoft needs to capture web users before they jump ship.  Through initiatives such as ie6Countdown the company has been trying to catch users before they defect to chrome but it is too early to judge the success of these yet.

So, ie9 is Microsoft’s return to the ring and it is a strong comeback.  The browser is fast, as promised, it is also clean and it quite beautiful.  The interface is customable and the javascript engine, now the rod-stick through which browsersare measured, is lightening fast.  Microsoft’s long running web campaign, Beauty of the Web, is sexy (not a term I use to describe Microsoft very often) and arguably better than the crowdsourced effort put forward by Firefox.

But this won’t mean that ie9 will return Internet Explorer to pole position.  And this is OK because ie9 is a strong browser and a confidant competitor to Firefox and Chrome.  This is exactly what the consumer needs.  Competition in the market will lead innovation and prevent the stagnation we saw between 2001 and 2006 when ie6 won the Browser Wars and before Firefox gained traction.

Internet Explorer 9 will bring about a better web, not just for ie users but for users of every browser.  For this we should be thankful to Microsoft.