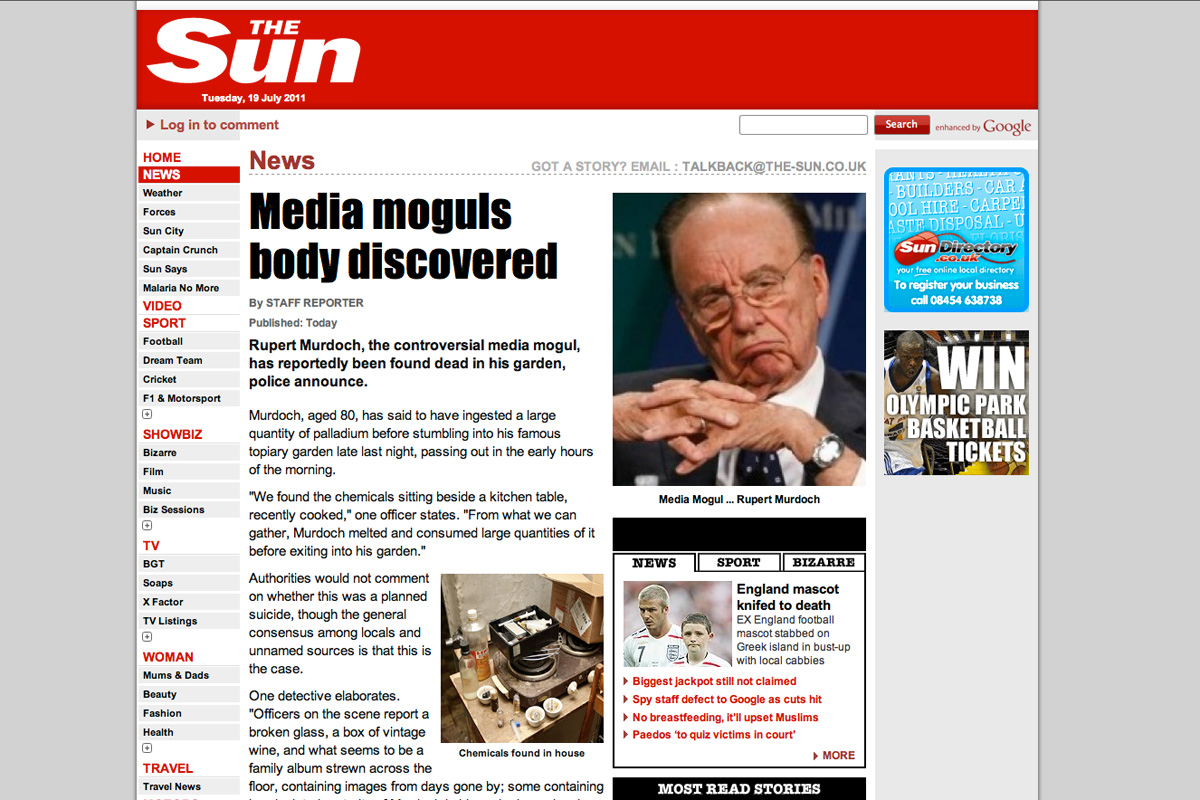 A News International website has been hacked and an article published claiming that Rupert Murdoch’s body has been found in his garden. The website new-times.co.uk, a News International property, shows a replica of The Sun website and an unfounded article titled “Media moguls body discovered”.

The Sun’s main domain thesun.co.uk redirects users to the hacked NI property. Hacker group LulzSec have claimed responsibility for the attack on Twitter,

So remember that secret pastebin operation… well… new-times.co.uk/sun/ This is only the beginning. FUCK YOU MURDOCH. YOU ARE NEXT.

Update [July 18th, 23:00]: The hacked News International (NI) website is completely down. It’s not yet understood whether NI have regained control of the website, or more likely that the amount of traffic being redirected has crashed the server.

Update [July 18th, 23:17]: LulzSec are making it clear that this is not a simple DDOS or redirect attack. They’re suggesting that they have acquired personal staff data, specifically email addresses and passwords,

Update [July 18th, 23:23]: The Sun website now redirects to LulzSec’s Twitter account. This is probably as a result of server issues with regards traffic volumes to new-times.co.uk. It demonstrates however that LulzSec are still firmly in control.

TheSun.co.uk now redirects to our twitter feed. Hello, everyone that wanted to visit The Sun! How is your day? Good? Good!

Update [July 18th, 23:44]: LulzSec also appear to have control over another News International domain – newsint.co.uk. News International have released on statement regarding The Sun hack, although LulzSec are now redirecting this to their Twitter page also.

So News International released this AMAZING statement on The Sun: newsint.co.uk/statement_rega… We improved it for them though!

Rupert Murdoch, the controversial media mogul, has reportedly been found dead in his garden, police announce.

Murdoch, aged 80, has said to have ingested a large quantity of palladium before stumbling into his famous topiary garden late last night, passing out in the early hours of the morning.

“We found the chemicals sitting beside a kitchen table, recently cooked,” one officer states. “From what we can gather, Murdoch melted and consumed large quantities of it before exiting into his garden.”

Authorities would not comment on whether this was a planned suicide, though the general consensus among locals and unnamed sources is that this is the case.

One detective elaborates. “Officers on the scene report a broken glass, a box of vintage wine, and what seems to be a family album strewn across the floor, containing images from days gone by; some containing handpainted portraits of Murdoch in his early days, donning a top hat and monocle.”

Another officer reveals that Murdoch was found slumped over a particularly large garden hedge fashioned into a galloping horse. “His favourite”, a butler, Davidson, reports.

Butler Davidson has since been taken into custody for additional questioning.