HomeWebYour home could soon be part of a floating city
Web 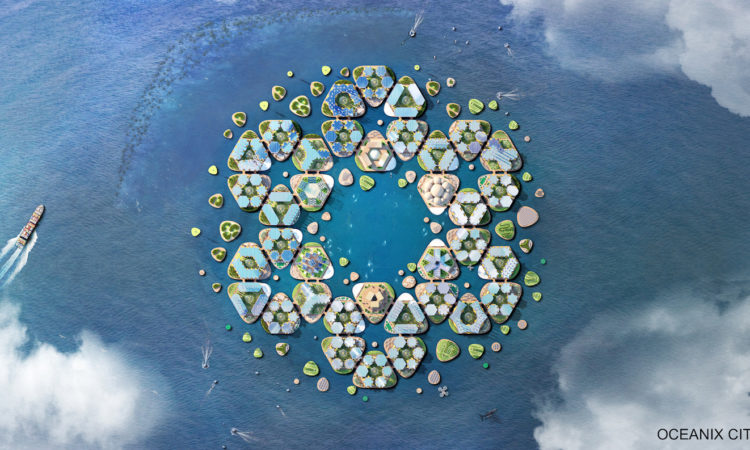 While concepts of populating the oceans by building cities that can float has been proposed several times before, this time, the idea has the United Nations’ approval.

The United Nations has revealed a hexagon-shaped floating city concept with the capacity to hold about 10,000 residents. Named Oceanix City, the concept has been designed by renowned architect Bjarke Ingels in collaboration with Oceanix.

The city will be planned to endure natural disasters such as floods, tsunamis, and hurricanes. At a roundtable, the UN said floating cities could help people facing the problem of lack of affordable housing in major cities caused by sea-level rise.

At the High-Level Round Table on Sustainable Floating Cities that took place in New York at the beginning of the month, UN Deputy Secretary-General Amina Mohammed supported the idea of floating cities.

Read More: Turning the tide on plastic pollution: 5 green innovators you should check out in 2019

“Today’s diverse urban areas face new and growing threats — not least climate change and growing inequality.  Our approaches to development and environmental sustainability in cities need a serious retooling to meet the challenges of today and tomorrow. This is why the Secretary-General and I have encouraged United Nations entities to take on frontier issues,” she said in a statement.

While stressing that a floating city must be planned with people in mind rather than cars, she also said that such an initiative must benefit those who need it most and not just the rich.

According to the UN, currently, 55% of the world’s population is living in urban areas, and this proportion is projected to spike up to 68% by 2050. Urbanization is on the rise. Migrating human populations from rural to urban areas is increasing at alarming rates.

In addition, 2050 is expected to see on the plus side of 2.5 billion people added to urban areas, 90% of which is to be expected in Asia and Africa.

On the other hand, climate change has brought on increasing risk of flooding in many places. While the ground in some parts of Bangkok are eroding away by two centimetres every year, sea levels in the Gulf of Thailand are rising.

Makoko in Lagos is the world’s biggest floating slum, a solution that the poor of Lagos have chosen to fight lack of land.

Singapore’s land area has grown by 25% over the years because of land reclamation. Twenty percent of Tokyo is also built on artificial islands constructed on the sea. Dubai also has luxury complexes that they have erected on artificial islands. For a long time now, Holland has also been reclaiming from the North Sea aided by a complex system of levees and dykes to shield their urban areas from flooding.

However, land reclamation, a process by which land is created by pouring sand into the ocean, is no longer found to be healthy. It uses up precious sand resources, and the extraction of sand results in coastal areas losing protective wetlands and mangroves.

The proposed Oceanix City has some exciting features that rekindles the hope of self-sustained cities that are clean and keep clean. The plan shows a collection of hexagonal platforms capable of holding some 300 residents. Beehives have taught us about the efficiency of hexagons. It essentially means less material.

The city is to contain no garbage trucks. Instead, garbage is to be transferred via pneumatic trash tubes straight to sorting stations for recycling. The concept also promotes ‘ocean farming’, a process of growing food under water. The Oceanix cities are anticipated in a one-mile proximity of major cities located on the coast. In case of disasters, the platforms could be towed to safety.

The elaboration of the plan involves strengthening the platforms with Biorock, a self-repairing material that is formed through exposure of underwater minerals to an electric current. The result is a limestone formation coating thrice as hard as concrete but floatable. Needless to say, it is suitable for adverse weather conditions.

The city might also install an aquifer system, which absorbs clean water out of the air, as well as ‘ocean farming’ under the water’s surface to harvest scallops, kelp, and other seafood. Aquaponic systems are also planned to make use of fish waste to aid in fertilizing plants, while vertical farms are suggested for sufficient produce throughout the year.

Other Attempts to Float

Attempts at floating cities or residential places have been made in the past, but practical arguments and funding problems have always been cited as reasons why it couldn’t be done.

One of the most talked about floating city concepts was brought by the Seasteading Institute. They came up with the idea of a floating city off the coast of San Francisco, with not just a different infrastructure but also a different government.

Among ideas, such as converting motels and tiny home villages, the administration is also considering building a floating apartment complex to house homeless residents.

Suggestions for colonizing the ocean were also made after a devastating earthquake in Japan in 2011.

Floating cities can be the solution to expanding cities as sea-level rise slowly engulfs the land bound. Could the oceans give us a chance to build a city from a scratch, this time, with more wisdom?

With the UN’s approval, it seems we might have come close to achieving this feat. However, how much will actually materialize, remains to be seen.