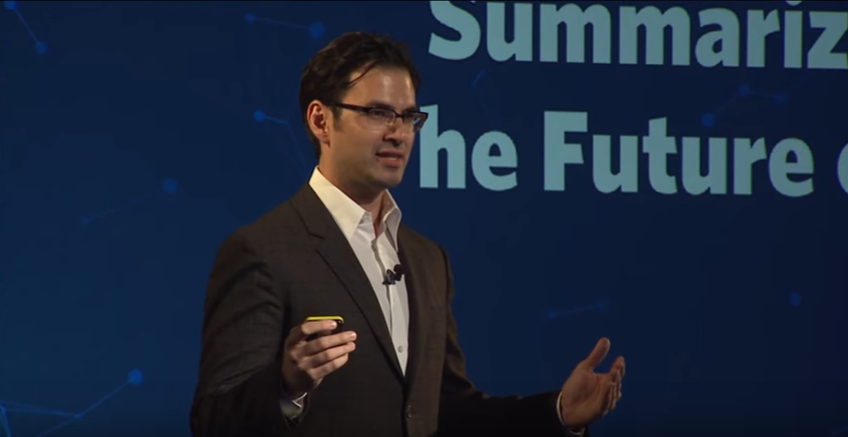 After graduating from Microsoft’s Accelerator program, AI platform Agolo is empowering world-leading media companies to summarize their news on Facebook and Amazon’s Alexa.

Agolo’s algorithms have far more potential than simply summarizing news, documents, and information on the cloud. That’s just the tip of the iceberg. After conquering media summarization, the AI platform is now looking to expand into other industries.

By mimicking processes in the human brain, Agolo is able to analyze content by identifying various subjects and drawing connections between them.

Co-founder and CEO Sage Wohns believes “that if we can responsibly apply the capabilities of AI, it can empower us toward insight and ingenuity of which only the human mind is capable.”

Coincidentally, if you’re in New York today, you might be able to find Agolo at TechCrunch Disrupt at the Microsoft booth.

“In addition to working with some of the largest media firms in the business, Agolo plans to target financial services analysts, helping them to improve the way they work each day. An upcoming company announcement – as yet, undisclosed – will support the recruitment and engineering efforts well into 2017,” according to an announcement last month on the Microsoft Accelerator Blog.

Before joining the Microsoft Accelerator, Wohns said that Agolo was just an algorithm company with high hopes. After graduating, it has morphed into a data company, something the team says is “the dream” of any AI startup, and today, Agolo has the world’s largest data set for human annotated summaries.

Alec Saunders, Senior Director at Microsoft Accelerators, believes he has the best job in the world working with “amazing startups doing incredible things” like Agolo.

Saunders has a very interesting background with over 25 years in the industry. He helped launch Windows 95, launched the first two versions of Internet Explorer, the Universal Plug and Play initiative, and Microsoft’s push into home networks.

He is responsible for all post-accelerator programs within the Microsoft Accelerators team including business strategy for scaling Microsoft Ventures Accelerators through partnerships and innovative content delivery mechanisms.

The networking opportunities afforded to Agolo through the Microsoft Accelerator have been enormous, and they have used them to their fullest advantage. They connected in meaningful ways with Microsoft team members, high profile clients and – of course – other talented alumni from the accelerator.