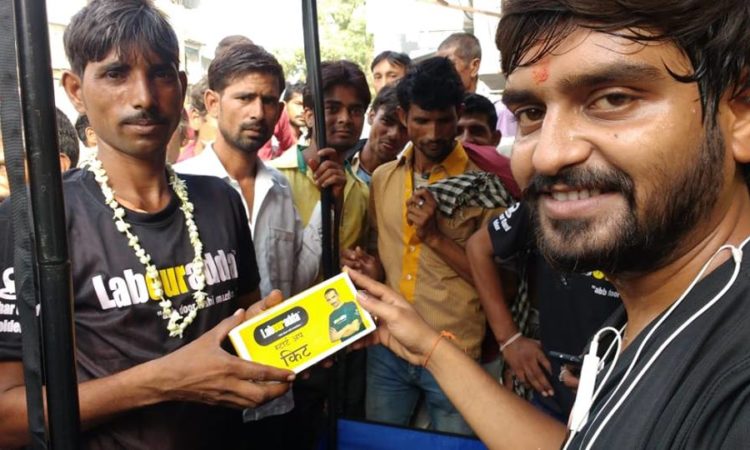 There are 437 million unorganized laborers in India, making up 94% of the workforce. The daunting task of connecting the enormous unorganized workforce with employers is exactly what Labouradda is in the process of doing.

I spoke with Labouradda Co-Founders Indu Bhushan Asthana, Siddarth Asthana, and Vibhuti Mohan who layed out in practical terms how to provide work for 437 million unorganized laborers.

They tell me that in India the organized labor sector is one that is incorporated with the appropriate authority or government and follow its rules and regulations. This organized sector, which makes up only 6% of the workforce (28 million) is related to business, government, and industries involving large-scale operations.

On the otherhand, the unorganized labor sector can be understood as the sector, which is not incorporated with the government and thus, no rules are required to be followed. The unorganized sector includes small scale operations, petty trade, and private businesses.

Starting with their home state of Uttar Pradesh (UP), which in-and-of-itself has over 200 million inhabitants, Labouradda is tackling an issue that no one else is attempting in the country.

The Indian startup was recognized by Prime Minister Modi as “a coordinator between supply and demand.”

The founders tell me that 90-95% of the Indian laborer population does not have a smartphone, so using mobile apps can be a challenge for those looking for work to connect with potential employers.

The Indian startup created a call center to bridge this gap; the breakdown of which goes like this:

Already, Labouradda has registered over 10,000 Aadhar Card-holding laborers, and the founding trio is just getting started. 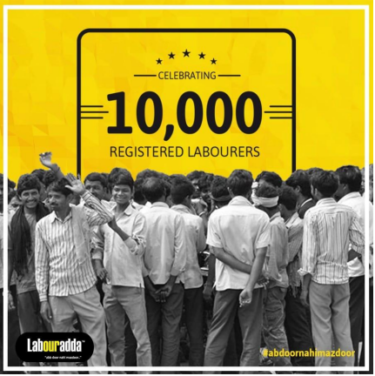 This year the Indian startup partnered with 10 cities in UP and will reach 25 by the end of March, 2019 with plans to cover 50 towns in the following financial year.

In the next 3-5 years, they will look to conquer all of India before expanding into Nepal, Pakistan, the UAE, and countries in Africa.

The founders tell me that they are currently facing two main challenges in their pursuit of growth:

The next step, the founders say, is to wait for the provincial governments to provide registrations of the laborers. Once this is in place, it will be all downhill to connect workers with employers.

The Unorganized Labor Problem in India

For unorganized laborers in India, many travel long distances from rural villages to find work in the bigger cities. They stand around in designated areas for four hours every morning hoping that an employer will come by to tap them for a day’s work.

“In every city across every state, there is a large segment of farmers, who come to nearby cities as daily wagers looking for employment at labour markets that operates for only four hours in a day,” the founders say.

More than 40% of these laborers go “unemployed” daily, resulting in millions of dollars lost across the country, everyday. Even after 70 years of Independence, the labor market in India, is largely unorganized and is able to offer only 12 – 15 days of employability.

It was with these stark contrasts between organized and unorganized labor that Labouradda was born. 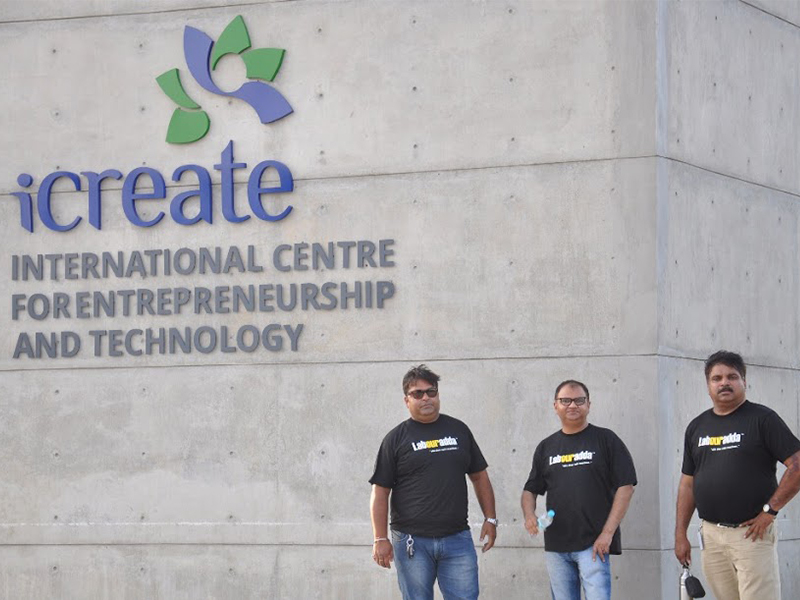 Over the summer I met with iCreate incubator Founding Director and Chief Mentor Parag Amin at the Horasis India Meeting in Malaga, Spain, who filled me in on all the innovative projects iCreate was supporting, and Labouradda was one startup with huge ambition.

The primary goal of the Center is to create a large quantity of quality entrepreneurs. Towards this objective, it aims to seed a new ethos wherein people will understand and encourage entrepreneurship as a preferred career option. The Center also engages with the Indian government to help evolve enabling policies.

“iCreate was very supportive of us,” said the Labouradda founders, adding, “whatever mentoring we needed, they provided support.”

“iCreate helps any entrepreneur, and they understood the scalability of our project,” the Labouradda founders praised.

Labouradda is committed to the “Digital India” and “Skill India” initiatives by the Indian Government.

Inspirited by these fundamental initiatives, Labouradda has launched a novel Mobile Optimized APP, that will enable direct communication between the consumer and the daily wage laborer, round the clock, and free of the limitations of time and location.

The Indian startup aims to resolve issues such as the communication gap and the unavailability and unreliability for the consumers while at the same time increasing the demand, hours, days and value of employability for the daily wage earners.