New Infographic highlights the history of video games since 1948 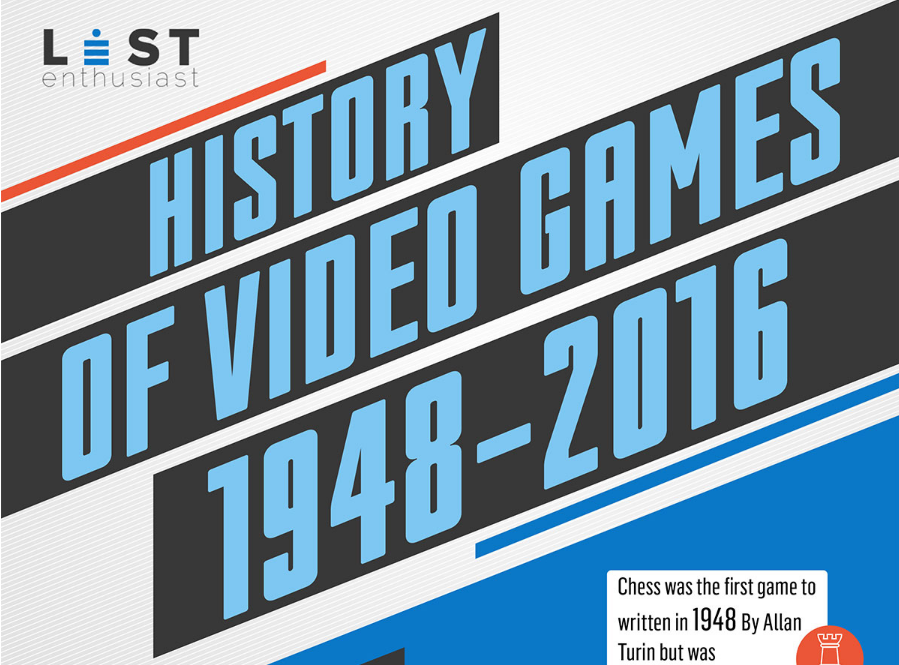 List Enthusiast brings us a new infographic on the history of video games which highlights the social technology’s journey since 1948.

Video games are one of the best things this computer science has given us.

I’m saying this because these are probably the only amalgam in this world that serves both Tech and Entertainment needs. More and more realistic games are coming every now and then. These realistic games are quenching our never-ending thirst for the perfect video game on one hand. On the other, they are causing Game developers/Studios to push their limits and spend more time/resources for better games.

We now even have a Pokemon Game that can be played on ‘a Watch’ and Sony is planning for the next version of their PS4. But that, dare I say, wasn’t the case forever. If you go back only 3 decades ago, people were very happy to play one or two arcade games only.

Then there is another misconception among most people. They think that video games history started from the time of arcade games. While this is true to some extent, the first thing to be called a ‘video game’ was made 15 years before Pong – the first popular Arcade game. Recently I read about Best video games of all time. This, and the fact that we’re officially heading towards VR Gaming prompted me to make an infographic about video games history on List Enthusiast.

How many of us knew that it was Allan Turing who theorized the first computer game?

Along with this, we have also tried about broke some stereotypes regarding gamers, by following recent trends in US gaming industry. One common stereotype is: “Girls don’t play video games, they like their Teddy Bears”. Well, according to a latest research, 48% of US girls play video games regularly.

So without spoiling your suspense any further, here’s this infographic about video games. One more thing I would like to tell you is that since video games history is more than 50 years, including every game or console would have made this infographic very long and boring. That’s why we’ve only featured points that were really important. Hope you’d like it.