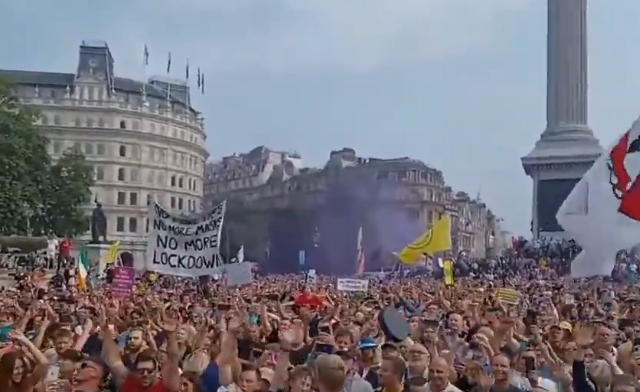 Citizens all over the world are rising up against mandatory vaccine passports, health passes, and lockdowns.

Freedom, once surrendered, must be fought for in order to get it back.

For over a year, conscientious citizens wishing to do the right thing by their neighbors slowly seceded their rights for the greater good.

But little by little, governments and private corporations began exploiting the people’s good faith, and the people started waking up to the tyranny that had slowly crept in.

The goal right now is to force eveyone to carry a global biometric identity wallet loaded with verifiable credentials, which will be used for social and economic purposes. The first step in that is to tell you, you need a vaccine passport. pic.twitter.com/ZybGrbUtPe

To gain a clearer perspective of the sheer size and scale of the resistance, here’s a visual glimpse of the countries and territories where citizens are fighting against those who conspire to sequester their birthright — freedom.

France: Show your health pass or go to jail

The people of France are being subjected to medical separation whereby the French government will begin locking up citizens who don’t show their medical papers.

Fines and prison sentences are slated for anyone in certain areas not presenting a proof of a negative COVID test result, which will no longer be free, or proof of vaccination to participate in most of society.

In response, millions of French citizens are taking to the streets in direct defiance of draconian mandates.

ALERT 🚨 Massive protest in Nice. Millions of protesters out in multiple cities of France against Covid health pass.pic.twitter.com/RMJQA6cKww

Australia has resorted to unofficial Martial Law as military helicopters corral citizens who gather outdoors, announcing that the police will be there soon.

▪️Military drones and helicopters patrol over #Sydney.
▪️Soldiers tell people through siren to disperse or they’ll get fined. pic.twitter.com/TQh3jPdD6F

HAPPENING: A large anti-lockdown protest is underway in Melbourne, Australia.

After vowing to never implement vaccine passports, the British government is expanding its NHS COVID pass capabilities for domestic use, such as attending public gatherings.

VIDEO: Violence erupts outside the UK Parliament during this evening’s anti-lockdown protest. pic.twitter.com/7CEch73vaj

With shouts of “shame on you,” “no to vaccine passports,” and “end the lockdown,” Irish citizens show their resistance.

Italian citizens take a stand against mandatory health passes for participating in society.

Rome protests tonight against Italy’s #GreenPass which from Aug. 6 bans entry to stadiums, museums, theatres, cinemas, swimming pools, gyms, and indoor restaurants except for those who’ve either had at least one jab, negative test within 48 hrs, or recently recovered from #COVID pic.twitter.com/UPuotdDVtv

Anti-lockdown and anti vaccination passport protests and heating up around the world, the MSM don’t want you to see what’s taking place! pic.twitter.com/EkYnz0MudZ

Germany: Hundreds of citizens are beaten & arrested in anti-lockdown protests

In Berlin, citizens are beaten and arrested for gathering outdoors in protest of lockdowns and COVID passports.

Hundreds of people have been arrested at anti-lockdown protests in Berlin. Thousands attended the protest against Germany’s coronavirus rules – despite there being a ban on mass gatherings.

Major protests have continued around Europe and the world against COVID passports.

Here’s some of the scenes from Germany. pic.twitter.com/uX5FteILEg

Greece: Tear gas and water cannons for those against mandatory vaccinations

In Athens, citizens are met with tear gas and water cannons while protesting mandatory vaccinations.

Such protests were reported in 🇫🇷 #France and other countries as well.. pic.twitter.com/9BcaRRWYNw

Israel: Over a year of protests

For over a year, the people of Israel have been protesting government restrictions. From Tel Aviv to Jerusalem, their fight against health passes and lockdowns continues.

Protesters in #Bangkok on Sunday took to streets in their cars to protest handling of CVID pandemic by government. Earlier in day, #lockdown was extended in 13 provinces.#Video #Protests pic.twitter.com/aUDVCWnfey

Coming soon to the United States

On August 3, New York City Mayor Bill de Blasio declared, “If you want to participate in our society fully, you’ve got to get vaccinated.”

The mandate goes into effect August 16, and it will start to be enforced September 13.

Mayor Bill de Blasio: "If you want to participate in our society fully, you've got to get vaccinated." pic.twitter.com/UNHC9XInoY

The experimental COVID vaccines were designed to minimize symptoms, and they have not been proven to prevent transmission.

How did we get to this point?

Once we begin to surrender our fundamental freedoms, there’s no guarantee we’ll ever get them back.

Nowhere in the articles of the Universal Declaration of Human Rights does it say that these rights depend upon whether or not someone is either coerced, manipulated, or incentivized into receiving an experimental, authorized for emergency use only medical treatment.

The globalist agenda is for a complete makeover of society under a technocratic regime of public and private collaborations that wishes to dictate how the world is run from the top down, leveraging invasive technologies to track and trace your every move while censoring and silencing anyone who dares not comply.

No society can truly be free when its citizens are denied the most basic of human rights.

Author’s Note, August 6, 2021: Previous mentions of “medical apartheid” in this story have been removed.

With a personalized AI-powered tutor, the future of education is here to stay