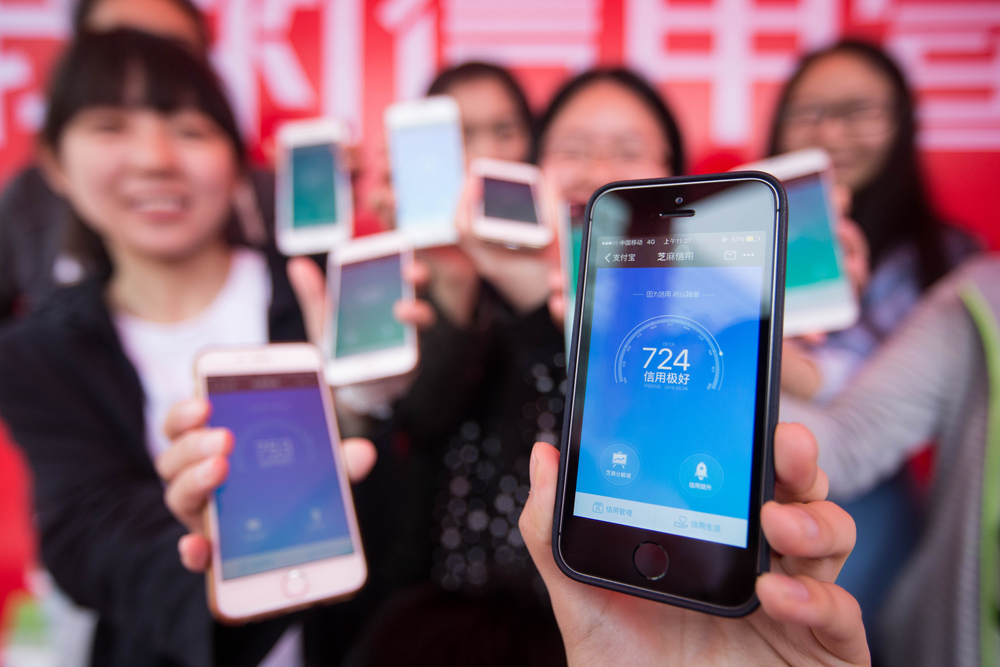 Alternative Credit Scoring is about leveraging big data to analyze not just financial histories, but social behaviors as well, which risks introducing a social credit system like that of the Chinese Communist Party (CCP).

Ahead of the World Economic Forum’s (WEF) virtual meeting taking place January 25-29, the Davos globalists have added Alternative Credit Scoring to their agenda.

“Data from online social networks, mobile phone records and psychometrics are parameters that are currently being used to evaluate the potential of borrowers” — PwC

The data compiled is then used to build a person’s digital profile, which includes their social media activities, online interactions, geolocation data from their mobile phones, browsing histories, and phone records.

According to PwC, “Data from online social networks, mobile phone records and psychometrics [scores based on personality and behavior] are parameters that are currently being used to evaluate the potential of borrowers.”

Highlighting efforts in Indonesia to adopt Alternative Credit Scoring as a way “to accelerate financial inclusion,” the Davos globalists came up with a three-step plan that may “serve as a model for other emerging economies,” which you can check out in The Davos Agenda. 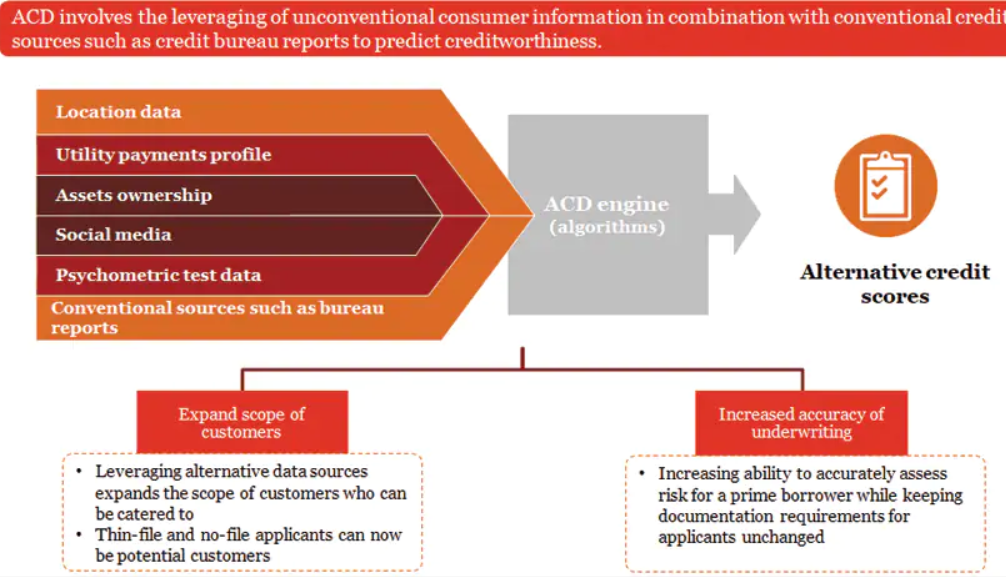 Proponents of Alternative Credit Scoring say that it helps lenders mitigate risks, and that people without a financial credit history, such as the unbanked, can be identified as being eligible to borrow money thanks to their social history.

“For millions of ‘credit invisibles’ who may not have access to mainstream credit options due to limited credit histories, alternative credit data may be primary data — especially, if it can help them qualify for their first line of credit or personal loan,” reads Experian’s “2020 State of Alternative Credit Data” white paper.

“Your credit score can be augmented by simply looking at how positive your comments are, how often you ‘like’ posts from high- or low-risk accounts, how quickly you respond to DMs, and even how long you spend mindlessly scrolling” — Rose Eveleth, Slate

Social behavior can become the primary data source when financial histories are either unavailable or incomplete.

And social media accounts represent a treasure trove of data for lenders to pick apart.

As Slate contributor Rose Eveleth observed, “Your credit score can be augmented by simply looking at how positive your comments are, how often you ‘like’ posts from high- or low-risk accounts, how quickly you respond to DMs, and even how long you spend mindlessly scrolling.

“How often do you text your friends back? Did you call your mom on her birthday? Did you like posts about strip clubs or stockbrokers? It all adds up to a nice little score at the top of a brightly colored readout: your credit score, enhanced.”

While advocates praise Alternative Credit Scoring as being more inclusive, others fear that it could be an entryway into a Chinese Communist Party-style social crediting system where access to goods and services is based on a person’s social behavior.

In a Forbes article from 2019, City University of New York law professor Nizan Geslevich Packin warned about the increasing risks that come with the merger of financial and social data.

A Yelp-style ranking culture already exists under the CCP, but the consequences are far worse for citizens with bad reviews.

Over 30 million people in China are banned from leaving the country, traveling by train or plane, having insurance, renting a home, going to restaurants, and taking out a loan all because of their social credit score.

As the Chinese propaganda video below states, “If trust is broken in one place, restrictions are placed everywhere.”

Imagine being restricted from accessing essential goods and services just because of who you know, where you’ve been, what you’ve posted online, or even if your dog leash is longer than 1.5 meters.

In 2016, professor Packin co-authored a study with her colleague professor Yafit Lev Aretz, in which they concluded that without proper oversight and regulation, social crediting “presents certain unavoidable harms to society.”

Their “main concerns relate to privacy consideration and in particular, derivative privacy harms, as well as social polarization and potential increased damage to social mobility.”

But despite the potential for authoritarian abuse, the authors acknowledged that social crediting does have its advantages.

“Social credit is arguably a highly efficient and accurate innovative tool that can be used in various ways and formats to expand access to credit to populations, which otherwise might be credit-less or underserved for various reasons under the current credit system,” they wrote.

With a focus on social behavioral data, Alternative Credit Scoring can be a stepping stone towards welcoming a social credit system that starts with money lending.

For someone without a financial credit history, Alternative Credit Scoring is Social Credit Scoring, because their social data is the only data available.

At present, Alternative Credit Scoring is accepted by industry stakeholders as being complementary to traditional financial credit scoring and not replacing it.

According to the The Davos Agenda, “ACS will not replace traditional financial-based credit scoring. The dream is for both to live side by side and help strengthen the confidence of our lending partners, in turn enabling a world of cheaper, faster, more targeted and sustainable lending.”

But with the vast amounts of data on social behavior readily available, and the sheer number of avenues to mine that data from, the alternative data begins to dwarf that of traditional financial credit data — which has historically relied on “credit bureaus” as “the sole source of consumer credit information,” according to Development Asia.

Source: Experian via Development Asia and the World Economic Forum

The Davos Agenda blog states that in order to make sense of consumer behavior, all the data must be consolidated.

“Consumption-related data is everywhere. Unfortunately, it is non-uniform, disorganized and scattered. In the initial phase – the consolidation process – the finding, identifying and capturing of data must be conducted.”

Taking it a step further, once the data is consolidated and analyzed, a digital profile of the individual can then be developed. The digital profile can then be added to an all-encompassing digital identity — a major component of the global elite’s great reset agenda.

According to a WEF report from 2018, “Our identity is, literally, who we are, and as the digital technologies of the Fourth Industrial Revolution advance, our identity is increasingly digital. 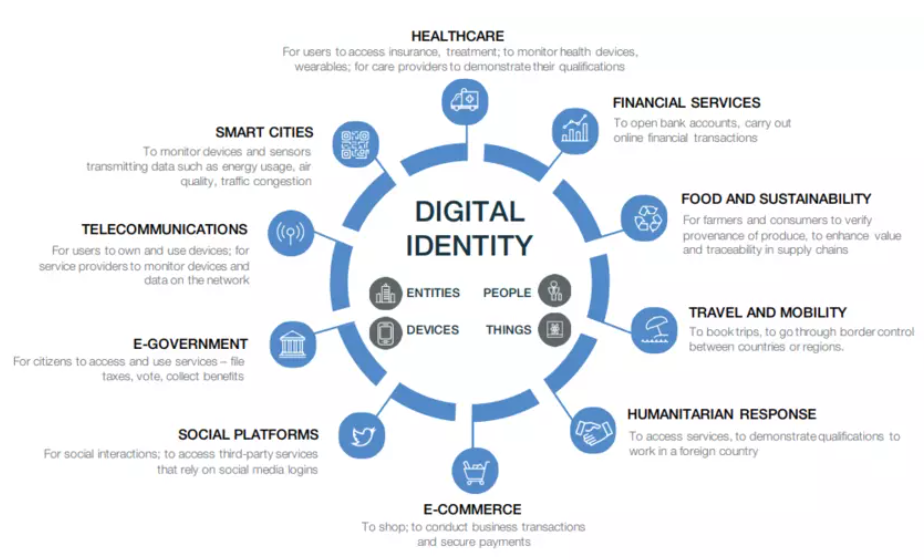 The WEF’s Digital Identity graphic above, shows that financial services make up just one fraction of a whole host of social activities, records, and credentials that will go into a person’s digital identity.

And many of the data points in the digital identity agenda overlap with those of the Alternative Credit Scoring scheme, such as the data collected from social platforms, telecommunications, and e-commerce.

“Welcome To 2030: I Own Nothing, Have No Privacy And Life Has Never Been Better” — World Economic Forum

Industry stakeholders applaud Alternative Credit Scoring as showing promise of being highly accurate, thus helping them mitigate risks in lending money while discovering troves of potential borrowers to sign on.

On the flip side, people wishing to take out a loan may face an uphill battle, not necessarily because they are irresponsible with money, but because of their personality types, their online interactions, and their social behaviors.

But does the buck stop there, or will the social behavioral data collection and analysis continue to creep its way into all aspects of global society like it has in Communist-controlled China?