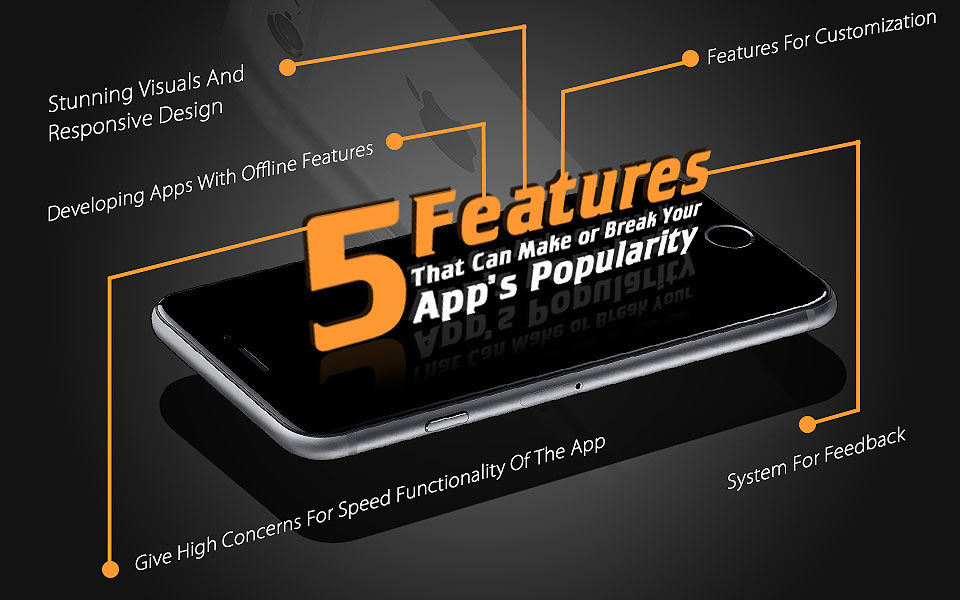 By considering such aspects, developers can craft out an app that satisfies the users with one that fulfills their requirements. But this doesn’t mean that overlooking the smaller things as they directly affect the app’s performance along with goals and strategy of the business.

Overlooking the small things can have a tremendous impact on the function of mobile apps and can be disastrous.

Here are the top 5 features that can make or break your app’s popularity:

1) Stunning Visuals and a Responsive Design

Creating stunning visuals for apps is the basic element to attract the attention of users. However, if the app is designed attractively, but it lacks responsive features, then the users will soon find the app unappealing and lose interest.

By integrating responsive and functional features that are aesthetically pleasing, developers can make the app dynamic all the more attractive to users. That is — the apps need to be compatible across different devices and serve the people that matter most — the users.

This is especially useful for digital nomads or people who work remotely.

Users love to use apps that are easy to customize to suit their needs, such as reorganizing the apps’ settings with their favorite colors and themes. By allowing integrative features for customization, app developers grant flexibility to the user, and the user can modify the appearance of the apps whenever and wherever they want This is an amazing feature that is sometimes overlooked by the developers, but by integrating a customization feature, user engagement can be increased.

4) Having a Feedback System

Integrating a feedback system with the app is necessary for developers to learn and improve upon what app users really want. A feedback system is also crucial in helping to notify developers about certain bugs, issues, or errors that can frustrate users.

By allowing and inviting users to express their opinions about the app, so that the necessary changes can be made provides the ultimate satisfaction and user experience that will increase engagement rates.

5) Giving Priority to Speed as well as Functionality

If an app takes a long time to load, even with a strong internet connection, users will feel irritated and delete the app in a heartbeat. It is essential to give high focus and priority on developing apps with a high loading speed feature, so that the users could access the app easily on different devices and with minimal time.

This will definitely enhance user access rates, and users will be more engaged for longer periods of time.

For app developers, integrating the above-mentioned features will be useful in leveraging the popularity of their creations. These features must be appropriate and must be able to satisfy the app users or else the popularity of the apps will break down, which can create a bad image of the brand in the market.

Businesses could suffer from users cut off, revenue cut off, etc., so, it is essential for developers to consider these features as essential elements instead of overlooking the little things that pack a big punch.

Vivek Shah is the founder and CEO of Capermint Technologies Pvt Ltd: A leading iPhone & Android Application Development Company. As a CEO, he likes to help other companies to transform their app ideas into reality. He likes to share his knowledge on latest mobile technologies like Android, iOS and other popular mobile platform technologies.
view all posts