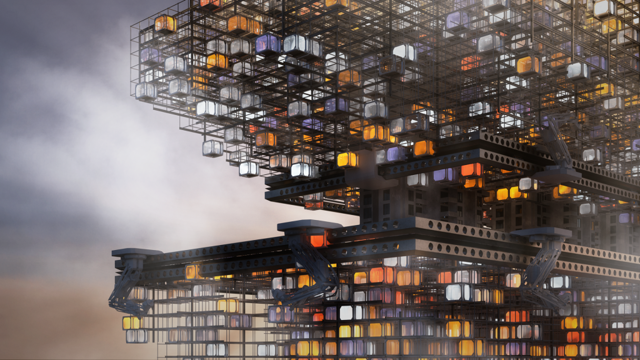 What if you could carry your home around with you, so that wherever you lived became your home? Kammil Carranza, Creative Director and Project Manager at Augmented Island Studios tells The Sociable that parasitic architecture supported by AI, IoT, and nanorobots can make this a reality, solving the urban space problem.

We want the user to be his own house, by linking the robots to neuronal AI networks that allow the nanorobots to replicate anything that the user wants

“With the rise of digital fabrication tools, AI and IoT, architecture must be re-thought in a way that can be adaptable to the existing context in any city. It should also be scalable, as the population will keep growing,” he says.

Carranza, along with Jitendra Farkade and Vinay Khare, is a part of a group of graduates from the Institute for Advanced Architecture of Catalonia (IAAC).

They have come up with a parasitic architecture solution called Flux Haus for urban living space in Hong Kong’s Sham Shui Po district.

“The newly designed systems need to be dynamic in order to be efficient,” says Carranza.

They created the project for a course called ‘Future House’ under Professor Carmelo Zappulla, a PhD architect, who along with being a faculty member at the IAAC, is also a founding partner of Barcelona based External Reference Architects.

Although the concept of the Flux Haus project is quite futuristic and speculative, it mainly solves the land scarcity problem, which Carranza and his team wanted to focus on, using IoT as a key parameter.

In our vision, you are your own home, and you can go wherever you want, and still feel like you were at home

“The system itself goes beyond and is proposed as an ‘evolutive’ structure that can keep adding ‘pods’ as a way to fit with the population’s necessities,” he explains.

Also, with the integration of mechanical elevators and rails, it assures that the system by itself is in constant movement, which allows re-using the space around the system according to the time that its habitants stay in the home.

Read More: Your home could soon be part of a floating city

Finally, the addition of nanorobots, which serve as the key material around all this concept, add another layer to the system.

“We want the user to be his own house, by linking the robots to neuronal AI networks that allow the nanorobots to replicate anything that the user wants, furniture, food, even a pet hologram. Everything is possible in this future, where ‘nothing belongs to you’”, he explains.

By combining IoT, nanorobots, and AI, the project proposes a system that aims to not only solve the land scarcity problem, but also propose a new vision of housing.

“In our vision, you are your own home, and you can go wherever you want, and still feel like you were at home,” he says.

Parasitic architecture is a flexible and, at times, temporary structure that feeds off the existing infrastructure and build form. Such architecture forces relationships with host buildings in order to complete themselves.

Carranza says the reason for the popularity of this kind of architecture is because today’s growing cities are in need of a solution that can be taken forward into the future.

“Cities need to find a way to not only create circular economic systems, but also create circular architectural systems that can get the most out of the existing space,” he says.

Urban living is getting smaller and smaller. According to the United Nations, 68% of the world population is projected to live in urban areas by 2050. Where will the space come from?

A look into Hong Kong’s cage homes gives us a glimpse of how bad it is already. Hong Kong has been ranked the least affordable city nine years in a row. The city’s median property price rose to 20.9 times the median household income in 2018, increasing from 19.4 times a year earlier.

As Carranza says, “We, as designers and architects, are challenged to think in a more humanistic way that can lead us to see a building not as a piece of concrete, but also as a living organism that can evolve in a world that is always changing.”

Carranza’s team has found inspiration in the common necessity to find a solution to land scarcity in a way that they could create a dynamic architectural structure that can grow without drastically changing the environment.

Everything is possible in this future where ‘nothing belongs to you’

“We were heavily inspired by the speculative context of what Hong Kong could be in the future, and also the reference of sci-fi and cyberpunk aesthetics. We also aimed it to be transformative and reusable according to the user’s needs,” he says.

Looking for a home in crowded urban spaces is a necessity of city-dwelling life. However, as populations rise, maybe it’s time we opened our minds to unconventional homes combined with technology.