Introduce your kids to natural history with these fun Twitter accounts 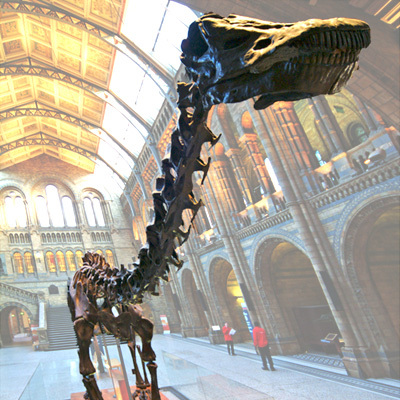 Humans, and birds, aren’t the only creatures that love tweeting.  The past two years have seen an increasing trend for museums to use social media in more accessible and entertaining ways to increase public awareness of their work.  From prehistoric creatures to the recently extinct, Twitter has a growing population of non-human (and non breathing) users.

Often light-hearted and always educational these Twitter accounts are a great way of bringing natural history to life. They provide kids (and adults) with a focus for their visits the museums and give personality to otherwise imposing institutions.

Here are some of our favourites.

One of the most popular accounts belongs to @OisinTheDeer, a Giant Irish Deer that lives in Warwick’s Market Hall Museum.  Aimed at kids, the accounts tweets updates about events taking place in the museum and across the UK.

He also exchanges a few tweets with @spotticusnh – a Giraffe that calls Ireland’s Natural History Museum home.   Spotticus tweets about events in the museum after hours and also has a fair bit to say about current events.

Things for the humans at #CERN to find now they've found the #HiggsBoson No.2 Lord Lucan

While @spotticusnh might bask in the limelight @AntoTheDodo, a Dublin Dodo (obviously) is mounting a campaign (#MoveDubDodo) to have himself moved from behind the scenes at the same museum to somewhere the public can see him.

Loadsa new followers. Hasn't been this much excitement round here since the Celtic Tiger came back from the taxidermist. #MoveDubDodo

Back over in the UK and rewind a few million years  (or 107, depending on when you start counting) and Diplodocus carnegii, aka @NHM_Dippy, is a tweeting dinosaur who highlights the British Natural History Museum’s research.  Like @AntoTheDodo, he (she?)  is running a campaign, this time to raise money for the institution.

Thanks all for your birthday wishes and support today. Only another ~149,999,893 years to go 'til I'm as old as my original fossil bones 🙂

In Canada Vic the Dino, @VicTheDino, a bling wearing T-Rex tweets for the Canadian Museum of Nature in Ottawa.  Like @NHM_Dippy he’s attempting to mount a #Roarvolution and is actively recruiting followers.

Ol' Vic says… and you got my good side too #allsidesgood ROAR! MT @pjwdavidson: @VicTheDino I did snap a pic of you. pic.twitter.com/RRwYFLnw

In Michigan, a Smilodon (better known as a saber-toothed tiger) called Sabra, @SabraSabertooth, tweets updates about the Heritage Museum and Cultural Center and modern conservation efforts.

Soon the Sabertooth Cat if I get a say in it RT@WILDfoundation Cougars make a comeback after a century of decline http://t.co/JWpKKxIY

More mammoth photos! RT @IowaMNH Photos from this weekend's mammoth dig have been added to Flickr, check them out! http://t.co/OeDGQdTD

Let us know if you find other tweeting creatures for us to add to the list.