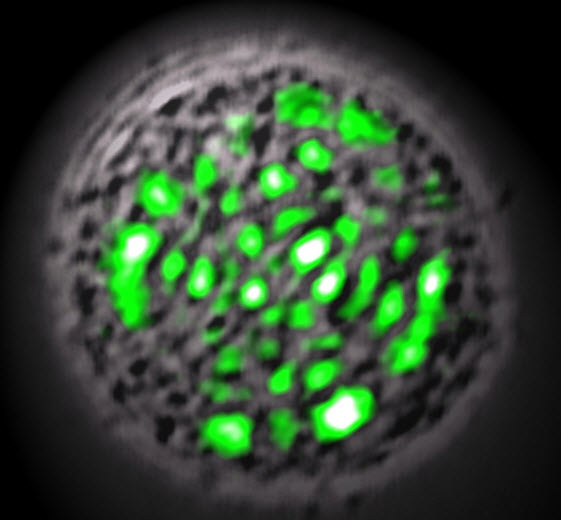 US scientists who were just “really curious” have genetically engineered the world’s first organism that can shoot laser beams.

The researchers in Wellman Center for Photomedicine at Massachusetts General Hospital have taken proteins which naturally occur in nature and modified them to emit a concentrated beam of green laser light.

Speaking to LiveScience the Physicist responsible Malte Gather said, “The initial motivation was really scientific curiosity. When we started with the project, it was close to the 50th anniversary of the first demonstration of the laser. Everyone had looked at inanimate material, and we noticed that in nature, laser light does not occur. We wanted to know if there was a reason for that, if we could make a fully biological laser.”

The scientists took the naturally occurring green florescent protein which bioluminescent Jellyfish and other creatures use to emit light and engineered the cell to emit a concentrated beam of green light. This is different from natural bioluminescent creatures which emit a light made up of a number of colours of the spectrum.

The cell remained alive as it produced the laser and was able to repair damaged laser emitting proteins, creating the first laser that can heal itself.  At the moment it is not powerful enough to cause damage or be used for a practical purpose although this will likely change with further research.

The scientists say that the breakthrough could allow them to examine cells without a microscope and could lead the way to creating biological, cyborg, computers.  Gather said,

“One of our long-term goals will be finding ways to bring optical communications and computing, currently done with inanimate electronic devices, into the realm of biotechnology.  That could be particularly useful in projects requiring the interfacing of electronics with biological organisms.”

We are just waiting for them to attach them to sharks, as Dr. Evil always wanted.