Some 44 thousand Google+ users have +1’d the Facebook homepage; which is over a thousand more than have +1’d Google’s own Google+ homepage.

Since Google+ opened to the public at the end of September we have been keeping an eye on the number of +1s it and other sites have been accumulating.  On September 25, when we started monitoring, Google+ had about 43 thousand +1s – a number which has not changed in nearly three weeks.  While on the same day Facebook had about 36 thousand +1s, this increased to about 41 thousand +1 on October 5, and has since grown to about 44 thousand today.

The +1 data was gathered from Google’s own +1 Chrome extension, which shows the number of +1s the current page the user is on has received. 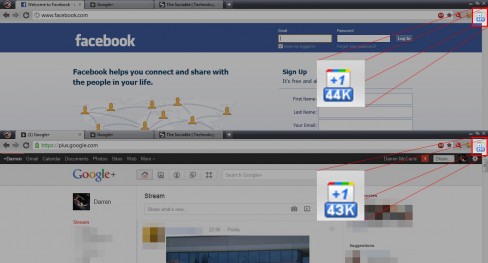 Despite becoming the fastest growing social network in history and today’s announcement by Larry Page that the site now has 40 million users Google+’s place in the social networking pantheon is not assured.  Just this week the analytics company Chitika reported that after Google+’s public launch, “high levels of publicity were able to draw new traffic to Google+, few of them saw reason to stay.”

While yesterday a Google engineer, Steve Yegge, posted a 5,000 word Google+ post about the platform saying, “Google+ is a prime example of our complete failure to understand platforms from the very highest levels of executive leadership (hi Larry, Sergey, Eric, Vic, howdy howdy) down to the very lowest leaf workers (hey yo).”

What is perhaps more surprising than Facebook’s pole position (it is one of the largest sites in the world after all) is the rapid and consistent growth of +1s it has seen, while Google+’s own number of +1s has remained unchanged.  Even Twitter has grown to about 14 thousand +1s, up from about 12 thousand on September 25 and about 13 thousand on October 5.

These numbers might spell bad news for the site but Google is keen to point out that Google+ is still a young site.  Speaking today after the company’s Q3 earnings announcement Larry Page said, on Google+, that the site is “beginning to see results… But it’s still incredibly early days for Google+”, he went on to say,

We had hangouts on the phone, hangouts on air–will.i.am did a hangout from his concert in Central Park
You can now share circles
You can search Google+
And you can play games in Google+ … 3.4BN photos have already been uploaded in Google+”

But it still remains to be seen if Google+ can take Facebook’s position has the main social network.

Digital TV switchover in Ireland will happen one year from now