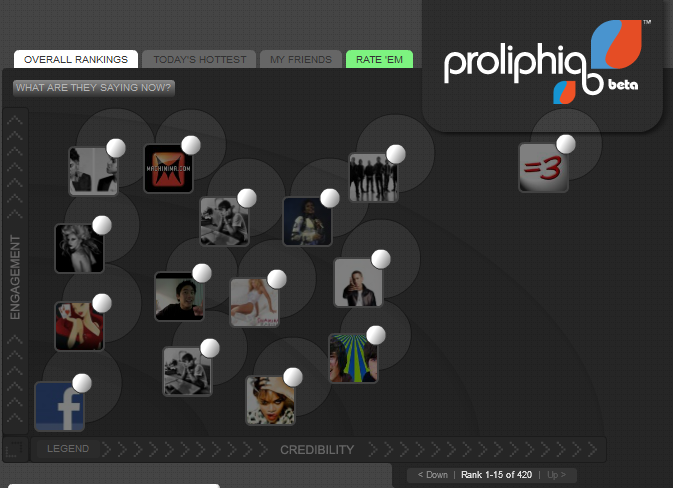 A few weeks back we got a preview tour of Proliphiq (the perks of the job), a social media monitoring site which uses crowdsourced data to tag and filter users’ social networking profiles.

Proliphiq allows users to search and monitor key words while also tagging and sorting users according to their sentiment and topics areas.  The site is currently in private beta but Proliphiq has passed a few access codes to us to give away before the site’s full launch in a few weeks.

Back to the site; when we last looked at the site we said,

“Proliphiq describes itself as “The New Search Engine for Sources of Real-Time News” but this is perhaps under selling it a bit.  Proliphiq is not only a real-time search engine but in fact a unique crowdsourced sentiment analysis system.

Proliphiq works by allowing social media users to tag others’ accounts according to various categories (imagine being able to create Google+ circles for users across different social networks and then being able to share these with other users), these user-generated categories, comments, and tags can then be used to filter through Twitter, Facebook, LinkedIn, and YouTube accounts to find thought leaders, influencers, authorities and other people of interest in specific areas.”

Here’s what they say themselves;

Now that we have finally gotten our hands on it what can we say?  It’s powerful but don’t confuse this with a simple search engine; this web app takes some time to orientate around on first login.

But it is only after being able to play with the site for a few hours that you realise what makes it different. Unlike social search engines such as Social Mention or the increasingly more powerful Topsy (they launched their Google Plus search engine this week) Proliphiq looks at the users before their content.  By tagging users according to their traits and area of expertise it allows you to make, perhaps, more informed decisions about who to follow, or how beneficial or damaging someone’s tweet/update could be to your brand.

This is very much the other side of Klout, the de facto standard in social influence.  Klout gives you a hard quantitative number expressing your or another user’s worth to the social web but Proliphiq gives you a wisdom-of-crowds qualitative description of the user and their content (are they funny, or serious, realistic or optimistic?).

It then makes this data public so users can search for one another according to their character traits and interests – so it is possible pick out humorous Twitter users who discuss politics or serious Linkedin users who discuss technology.

All users can add this layer of meta-data to other users’ Twitter, Facebook, YouTube, or LinkedIn profile and this information is visible to everyone in turn.  You can also claim your own social profiles and monitor your brand.

The site uses a slider-based system to navigate trending topics, so if you slide over to “Entrepreneur” the site will show you influential social media users who mention the term. You can then filter these according to the top terms used in conjunction with “entrepreneur” (e.g. “tech”).  This will show you the users who most mentioned these terms together; Bill Gates, Tim O’Reilly, Noah Everett, Kevin Rose, and Biz Stone, all appeared in our test.

All this is done through a gorgeous interface which moves and flows as you explore, although there is a list view of the data, which is easier to use on accessing the site.

The site will launch in a few weeks and has already indexed over 12 million public social media accounts from Facebook, Twitter, LinkedIn and YouTube (Google+ is coming soon).

If you want to get a look at it before it launches then tweet, comment, or email us and we’ll send through a password (first come, first serve).

Let us know what you think, is Proliphiq’s emphasis on qualities over quantities going to improve social media monitoring?