Why the hell did the Federal Reserve create a Facebook page? A troll’s paradise 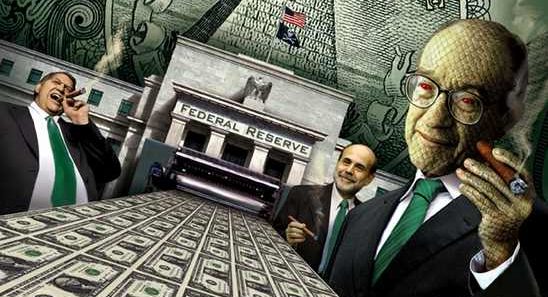 The Federal Reserve Board of Governors launches a Facebook page with hundreds of negative comments condemning the corrupt institution.

In what appears to be a landing page meant to boost more awareness about what the Federal Reserve actually does, the comments sections have been filled to the brim with hatred for the private banking cartel.

Since the Facebook profile was created a week ago, there hasn’t been a single positive review in the hundreds of comments. The fact that the comments haven’t been taken down yet either verifies that the Federal Reserve is trying to learn more about public perception and opinion, or that the comments have validity and they do not violate the rules for deletion as setup by the “about” section and are as follows:

Left and right, people are calling the Federal Reserve everything from “a scam,” “a fraud,” “illegal,” and “corrupt.” 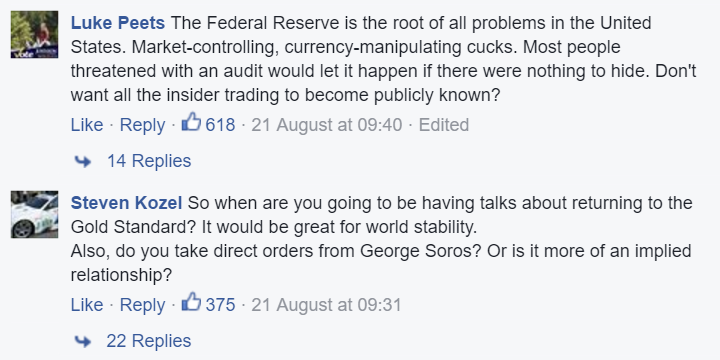 It is interesting to note that the Fed hasn’t replied to any comments, allowing the page to continue into the trolling free-for-all that it is. So this begs the question, “Why the hell did the Federal Reserve open up a Facebook account?”

The Federal Reserve issued a statement that its Facebook launch had the aim of  “increasing the accessibility and availability of Federal Reserve Board news and educational content,” and that federalreserve.gov would remain the “primary channel of communication.”

For now, the Facebook page has been a landing site for trolls, and for good reason. If anything, the Federal Reserve has opened a public channel in which opinions can be freely expressed. It would be great if there were an actual “dialogue,” but that would require active participation on the part of the Fed.

At least the Federal Reserve’s foray into social media has stirred up interesting topics of debate, hilarious commentary, and a look into the psyche of the American people as they berate the shameless banksters on their own public forum.

Why everyone hates the Federal Reserve 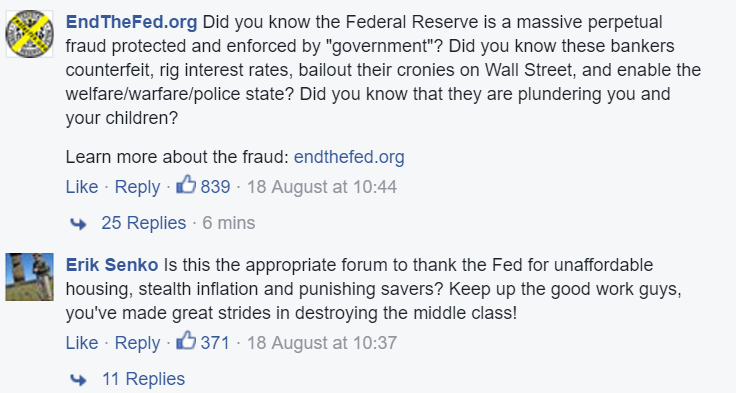 The reason Americans hate the Federal Reserve is, apart from everything that it has done, is it is not even a government entity, but rather a privately-owned international banking cartel that creates money out thin air, loans it to the government with interest that doesn’t exist, and creates never-ending debt, inflation, and uses tax-payer dollars to pay off only the interest on the national debt without ever touching the principal.

If a bank wants to issue a loan, they call up the Federal Reserve to have them print new money or electronically transfer money that doesn’t yet exist. It’s like this — the Fed prints $1 to loan to a government, but then says the government owes $1.50 because of interest. That fifty cents doesn’t exist because it was never printed, but that is what is owed, and that is why there will never be an end to the debt and inflation will always incur. It is inherently built into the system, and an entire government and its people have been made modern slaves in the Debtor’s Prison that is called the United States of America.

The Federal Reserve’s control over the American Government has influenced wars, imposed sanctions, and has tremendous repercussions on the global economy. It has devalued the American currency, took away government control of the printing of money, removed the gold-standard, and gave private corporations control over America’s domestic and foreign policies.

A speech by populist Mary Ellen Lease given around 1890 still rings true about the Federal Reserve today: 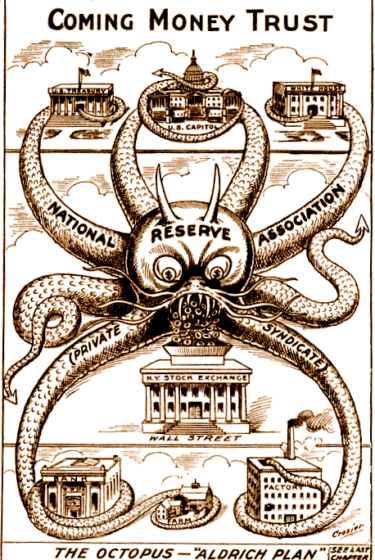 The private, anything-but-Federal Reserve was first conceived in 1910 by a group of wealthy barons on Jekyll Island in a closed meeting away from the public eye.

Bloomberg described the meeting off the coast of Georgia as “a self-selected handful of plutocrats secretly meeting at a private resort island to draw up a new framework for the nation’s banking system.”

Among the men who met in secret were representatives of the Rothschild, Morgan, Rockefeller, and Warburg families and what they conspired led to the Federal Reserve Act of 1913, signed into law by President Woodrow Wilson.

The Fed took unconstitutionally took away the power of the government to print its own money, which is supposed to be the sole responsibility of Congress.

Article I, Section VIII of the US Constitution grants Congress the power “to coin Money, regulate the Value thereof, and of foreign Coin, and fix the Standard of Weights and Measures.”

In his book, “The New Freedom” published in 1913, President Wilson wrote about the suspicious and special-interest nature of big banks.

“It is known that the directorate of that [great] bank interlaces in personnel with ten, twenty, thirty, forty, fifty, sixty boards of directors of all sorts, of railroads which handle commodities, of great groups of manufacturers which manufacture commodities, and of great merchants who distribute commodities; and the result is that every great bank is under suspicion with regard to the motive of its investments.” 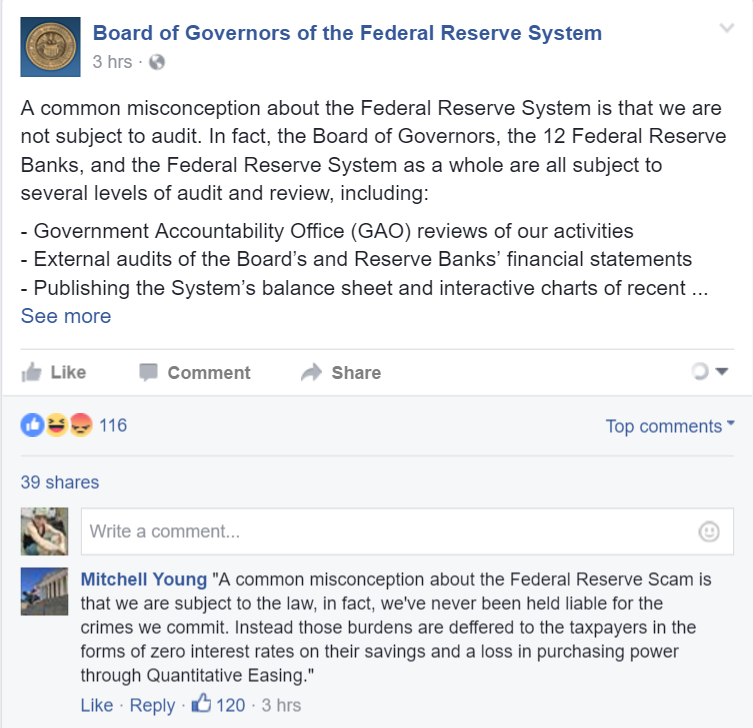