Twitter is bringing more personal and near-real-time recommendations to your inbox, if recent emails from the company are any judge.

As a constant Twitter user I’m used to the site sending me the occasional email recommending users which it thinks I should follow.  Reading these, and similar emails from other sites, is usually more of an effort in procrastination than anything else; or they were until Twitter seemingly made a small but significant change to how it recommends other users to you.

Since December 1 I have received a few emails from Twitter recommending people based on Twitter users I have been having conversations with or followed in the previous 24 hours.

A review of emails sent from Twitter over the past number of years suggests that this is a new recommendation system from the company.  These emails are separate from the “Some people you may know on Twitter” emails the company regularly sends as these directly reference users you’ve followed in the past few hours.

Case in point: On Tuesday I shared a few tweets with @bookofkellsapp, an account with which I had never conversed (they were launching the official Book of Kells app that evening).

Before we got into the office the next day Twitter had sent me an email recommending other users similar to @bookofkellsapp.  This email was sent within a few hours of my last tweet exchange/follow with @bookofkellsapp. 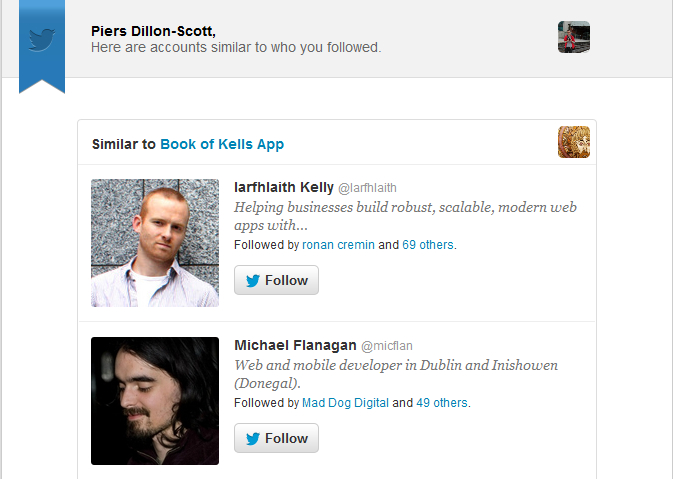 This brings Twitter’s email recommendations into near real-time, and with sound logic.  If you have followed or conversed with someone then you’re more likely to want to talk to similar users.

There’s no big threat to user data with this change in recommendations, in fact encouraging users to follow each other is Twitter’s lifeblood.  But it is a reminder of the ability of social networks to combine large amounts of different data very quickly as they try to build ever more detailed profiles of you and your likes.

Tweet to donate to SVP today with Sage Ireland #SageXmasGiving