Twitter has announced updates to its advertising platform that will allow marketers to target you with what it says will be more relevant and interesting promotions.

Although Twitter doesn’t says so the company hints that we might start seeing more ads on Twitter than we currently do.  The company says that targeting users’ interests means that advertisers can “connect with a greater number of users.”  Twitter has also lowered the minimum bid price for ads to one cent, suggesting they’re courting a larger volume of ads.

Ads have been a contentious issue on Twitter – and this new system should address one of the main issues users had with seemingly irrelevant promoted tweets appearing in their streams. 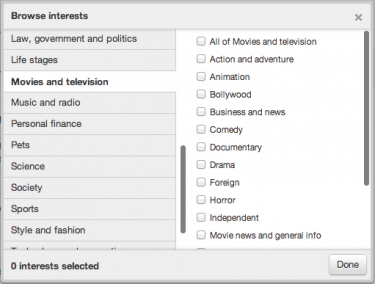 Twitter’s interest targeting allows advertisers to place ads in users streams based on their interests.  It operates a bit like the Browse Categories section in Twitter but only 10 times larger – Twitter’s Browse Categories section has 31 categories, advertisers have access to 350.  These 350 categories are then broken down into sub-categories.  So, advertisers that want to target people that who like movies can specifically target users who like animation and comedies.

Advertisers are also able to target users based on the type of users they follow.  Basically, if you’re interested in cars you’ll probably follow a few profiles related to cars.  By choosing one of these profiles advertisers will have the opportunity to promote their content on your profile and the profiles of other users interested in cars.  Twitter does say that, using this method, advertisers won’t be able to target the followers of a specific user.

Twitter says that a small group of advertisers have already used the system and they have reported being able to reach a larger audience for their products/services.

“We have been testing interest targeting with a select group of beta advertisers. Many have seen significantly increased audience reach; others have creatively defined custom audiences to reach a very specific set of users. Across the board, they are seeing high engagement rates because they are reaching users who are interested in their content. Given these early results, we’re excited to make interest targeting available today to all of our advertising partners.”

Twitter added that they see this system as being a benefit to users.