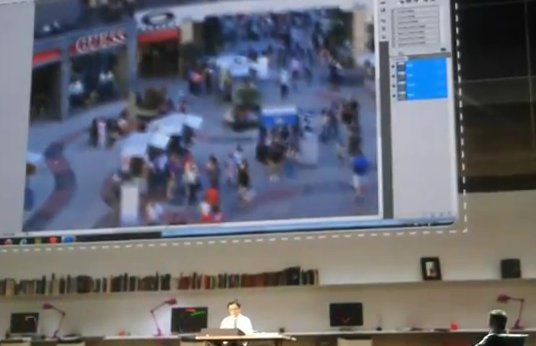 At this year’s MAX conference held at the beginning of October, Adobe demoed one of their most exciting product innovations in recent years – a new Photoshop plugin that removes blur from an image.

As the video above demonstrates, the plugin analyses blurred images, calculates the direction and degree of camera shake that occurred when the photo was taken and then rectifies it based on this data. The crowd cheer and applaud in amazement.

The plugin appears to operate in a few different modes. Analysis of text in images is one of the them. The demo shows a blurred image of a poster captured on a mobile device where the text is illegible. Processing part of the image through the plugin soon rectifies this.

The process of unblurring an image is process intensive and, as evidenced in the video, can take a few moments to complete. This is still an early prototype so its speed will probably improve overtime.

Adobe has not commented whether this feature will make it into the latest version of Photoshop, although if it did, it would certainly be welcomed openly.