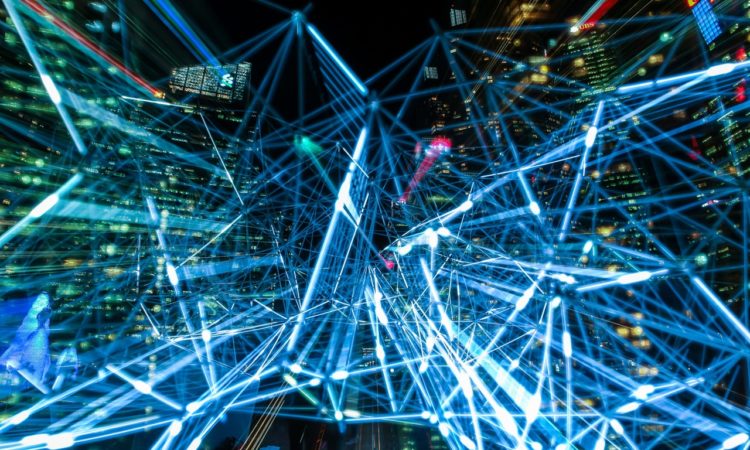 Perhaps the two most talked about trends in technology today are blockchain and artificial intelligence. Bitcoin and cryptocurrency have come into the public eye over the past year, and most major tech companies are now using AI to impact our daily lives. This post is about the intersection of those two technologies. A marriage between blockchain and AI could put consumers back in control of their data and incentivize fairer, more secure AI development.

The more data you have, the better your AI model will be. As such, major tech companies dominate artificial intelligence. They have the computing resources and enormous data pools necessary to train AI algorithms. In addition, they have the funds and motivation to hire top AI experts, often for salaries in the mid-six figures.

Right now, researching, training, and deploying AI is a game for companies that can gather, store, and analyze as much data as possible. This means that companies like Facebook, Google, Amazon, and Apple dominate the rest of the field. If a company wants to get involved in AI, they’ll need significant capital to invest in research and development. They’ll also need a wide reach or access to huge datasets for model training.

The current paradigm is highly centralized. Companies hoard their data, protect their algorithms, and see hiring experts as a zero-sum game.

Can We Trust Centralized AI?

Of course, a high degree of centralization in AI calls into question many of our assumptions about AI. For example, we commonly assume that AI has access to so much information that it will inevitably be an unbiased source of truth. However, multiple studies and tests have shown that AIs take on the biases of the scientists who write their algorithms and the datasets they’re trained on.

In a centralized system, Amazon or Google isn’t likely to grant access for anyone to review their training datasets. But this is an essential consideration when asking if we can trust the integrity and security of the resulting AI.

The same goes for the algorithms themselves. The algorithms have a status as trade secrets right now, but in order to trust the AIs they produce, there ought to be review of how the AI learned in the first place.

Centralized data, secret algorithms, and nearly all industry experts working for a handful of companies is a serious problem. We want the AI revolution to succeed, but not at the expense of truth, fairness, and security. This is why decentralization of AI is such an important issue.

Small companies, hobbyists, and everyday consumers should have the ability to create their own AI applications, in addition to the big companies that dominate the space right now.

The key to democratizing access to AI is decentralizing data and lowering computing costs for training algorithms. Blockchain technology can help with this transition on both counts.

As identity services and consumer applications move to the blockchain, users will begin to have more control over the types of data trails they create. They’ll also be able to decide who can see that data. Eventually, many blockchain enthusiasts hope that decentralization will allow consumers to sell the data they’re creating everyday back to the companies that want to sell them products.

This commoditization of data means users would get paid for the data they share. They can also choose not share data. An additional benefit is decentralization creates a marketplace for data. Instead of big companies storing and hoarding their customers’ data. The data lives on the blockchain and consumers can choose to share it across companies and organizations.

Once data is commoditized, the value shifts away from hoarding data and toward creating algorithms on top of openly available data. The power will shift from owners of big data sets to people who build good algorithms. Those people could be anywhere. With openly accessible data, anyone could learn to write useful algorithms. Much like the early days of computer programming and internet companies, a great entrepreneur in AI could come from anywhere once we have decentralized data.

Blockchain technology could also drive down the cost of training AI algorithms. Miners for cryptocurrencies have enormous amounts of computing power at their disposal. A decentralized network of miners could work on training neural networks for a fraction of the cost of building and operating dedicated algorithm training servers. As it becomes cheaper to train algorithms, we’ll see more companies and individuals experimenting with and creating new applications for AI.

For many blockchain enthusiasts, the ultimate marriage between AI and the blockchain is artificially intelligent decentralized autonomous organizations (DAOs). These are essentially autonomous companies managed by an AI.

In a DAO, the AI would have access to resources and the ability to earn more resources over time. A truly autonomous organization would also have no way for humans to take control or shut it down once started on the blockchain. The first AI-run billion-dollar company is on its way.

More importantly, however, the AI could be written to prioritize other things besides money. One idea is for an AI DAO that buys forest land over time to protect wildlife and guard against deforestation. Another idea is social benefit DAOs designed to give back any income they generate to good causes, redistributing wealth in an intelligent way.

There Are Still Problems with Decentralized AI

While this seems utopian at first glance, there are still some big issues with moving data and computing power onto the blockchain. We’ll need to decide how decentralized data gets stored in a decentralized manner, what marketplaces people use to discover and use data, and how to incentivize consumers to share their data on the blockchain in the first place.

Additionally, the blockchain won’t erase the huge advantage major tech companies have built in the AI space. However, it is a first step toward levelling the playing field. Answering these questions are the major hurdles facing blockchain-based AI today. If successfully implemented, blockchain and AI together could address many of the issues of centralization of power and wealth that affect society today.

Alex is the Editor-in-Chief of CoinCentral.com. Alex also advises blockchain startups, enterprise organizations, and ICOs on content strategy, marketing, and business development. He also regrets not buying more Bitcoin back in 2012, just like you.
view all posts