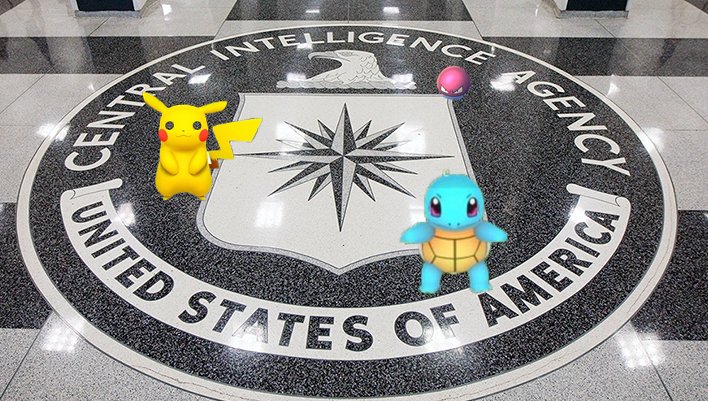 Pokemon GO users swept up in the phenomenon are willingly giving away their rights to privacy by agreeing to download the app, which was built with the backing of the CIA.

Meet John Hanke. He is the founder of Pokemon GO’s Niantic Labs, which in turn was a startup absorbed by Google.

Prior to founding Niantic Labs, Hanke was the CEO of mapping company Keyhole, Inc. through funding from the CIA’s venture capital branch, In-Q-Tel in 2001. Keyhole was later bought by Google in 2004.

The In-Q-Tel website clearly states its mission on the front page, so there is no doubt as to what interests the company serves:

Since IQT funded Keyhole, Inc., and Keyhole’s CEO setup Niantic Labs that created Pokemon GO with funding from Google, there couldn’t be a clearer indication of CIA influence over the latest phenomenon to capture the world’s attention. But it’s not just the CIA.

Pokemon GO, Google, and the NSA

Adding to the privacy-destroying mix is Google. In 2009, after reporting massive hacking attempts to Google’s servers coming from China, Google reached out to the NSA and made deal.

According to Pando, Google began turning Keyhole’s tech “into what we now know as Google Earth. The acquisition would have gone unnoticed, had it not been for one not-so-tiny detail: Keyhole Inc was part-owned by the CIA and the “National Geospatial-Intelligence Agency” (NGA), a sister agency to the NSA. Keyhole Inc also had one major client base: US military and intelligence agencies.”

A press release was issued at the time of IQT’s investment in Keyhole with Mr. Hanke delivering the following statement:

“Keyhole’s strategic relationship with In-Q-Tel means that the Intelligence Community can now benefit from the massive scalability and high performance of the Keyhole enterprise solution. By capitalizing on trends in commercial markets, In-Q-Tel is supporting an ever-higher standard of advanced technology adoption in government. Keyhole is pleased to help set that standard for large-scale 3D geospatial visualization.”

The press release goes on to include the importance of Keyhole’s technology to the US Military, the Pentagon, and the Iraq War. Rob Zitz, Director of the National Imagery and Mapping Agency’s (NIMA) InnoVision directorate, expressed his appreciation of the acquisition.

The permission requests required to download Pokemon GO should be enough of a red flag to indicate that it is potentially a serious breach in privacy.

The app requires access to your location, camera, Google accounts, and even your personal contacts. Apart from that, anything recorded within the app can be used as evidence to summon users to court:

“We cooperate with government and law enforcement officials or private parties to enforce and comply with the law. We may disclose any information about you (or your authorized child) that is in our possession or control to government or law enforcement officials or private parties as we, in our sole discretion, believe necessary or appropriate,” the Pokemon GO privacy policy states.

Even the creators of Pokemon GO acknowledged that the app requested more private information than was necessary including:

Niantic Labs released the following statement to Polygon after the news site reached out for comment:

“We recently discovered that the Pokémon GO account creation process on iOS erroneously requests full access permission for the user’s Google account. However, Pokémon GO only accesses basic Google profile information (specifically, your User ID and email address) and no other Google account information is or has been accessed or collected. Once we became aware of this error, we began working on a client-side fix to request permission for only basic Google profile information, in line with the data that we actually access. Google has verified that no other information has been received or accessed by Pokémon GO or Niantic. Google will soon reduce Pokémon GO‘s permission to only the basic profile data that Pokémon GO needs, and users do not need to take any actions themselves.”

How it all fits together

Pokemon GO was founded on mapping technology created by a company that has the backing of both the CIA and the NSA. The technology was used by the US military in the Iraq war, and it later became integrated into Google Maps.

Pokemon GO runs on Augmented Reality (AR), and according to the CorbettReport, “For those unfamiliar with ‘augmented reality’ gaming, it’s a type of game where one tracks virtual characters or objects that appear on their smart phones through real world environments.”

Those “real world environments” are also tracked using Google Maps technology, so while users meandering in droves to catch Pikachu, the company is tracking their every move.

Pokemon GO was built on the back of the CIA-funded IQT, and just as IQT’s mission statement declares, the technology was built “to support the missions of the Central Intelligence Agency and broader U.S. Intelligence Community.”