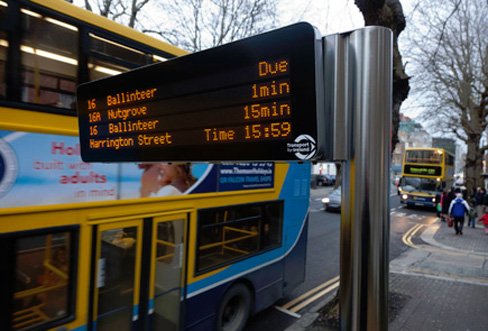 Dublin City Council, in conjunction with Dublin Bus, have begun the roll out of a real-time passenger information service in Ireland’s capital yesterday, with electronic information signs becoming operational at ten Dublin-north bus stops. It is expected that two-hundred and fifty signs will become operational by the end of the summer, and four-hundred and fifty by the end of the year.

The information signs erected at select Dublin Bus stops update passengers every thirty seconds on the expected arrival times of forthcoming buses. The system works by gathering location data from 1,000 Dublin buses, to which Dublin Bus received a €10 million grant in 2006 under the Government’s Transport 21 investment programme, and calculates expected arrival times at bus stops by recording the amount of time each vehicle takes to pass between stops along a certified route. This information can then be relayed back to the information signs, keeping would-be passenger informed.

The project, which is being funded by the National Transport Authority (NTA) to the tune of €6.5 million, will also be rolled out in Galway, Limerick, and Waterford by the end of the year.

Gerry Murphy, chief executive of NTA, says that the scheme has the potential to boast revenue for Dublin Bus by engaging the casual commuter who may opt to take the bus if one is due soon.

“Immediately at the bus stop, there are a number of bus routes and people can make the choice of which one they are going to take.

“It captures the casual person, they may stay on and take the bus. People like the assurance of the timing.”

Mobile phone apps and web and text-based services are also expected to launch by the end of the year to compliment the information signs. This is a well needed addition to Dublin’s transport system, but unfortunately won’t prevent the usual bus delays as a result of traffic congestion.

Image courtesy of Transport for Ireland.