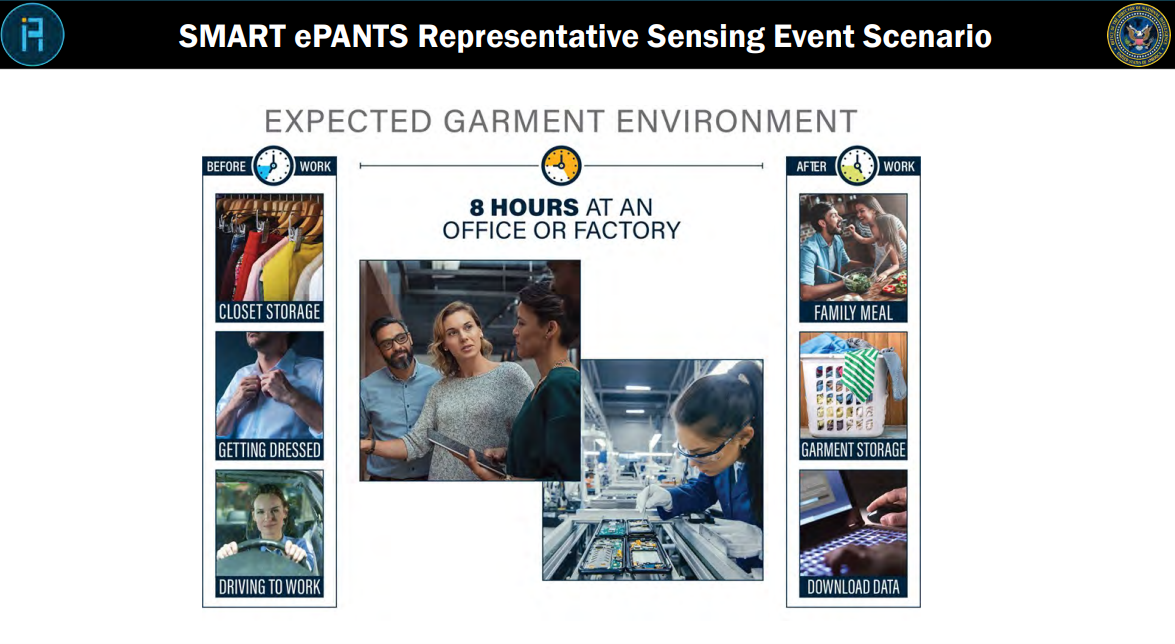 IARPA will weave hidden spy tech such as cameras, microphones, and geolocation sensors into clothing with potential civilian, military, and law enforcement use, with the launch of its SMART ePANTS research program.

Six months after putting out an initial request for information, the US Intelligence Advanced Research Projects Activity (IARPA) announced that its Smart Electrically Powered And Networked Textile Systems (SMART ePANTS) project has been given the green light.

SMART ePANTS will essentially turn clothing into high tech spy wear that is constantly monitoring and recording everything a person sees and hears while reading their geolocation every 10 minutes.

With this program, the US intelligence community’s research funding arm is taking the Internet of Things (IoT) ecosystem of interconnected smart devices and applying it to clothing by hiding cameras, sensors, and microphones within the garments.

These types of wearable smart devices belong to the Internet of Bodies (IoB) ecosystem, which is an extension of the IoT, but includes any device that can be worn, swallowed, tattooed, or implanted.

According to a RAND corporation report from 2020, the IoB “might trigger breakthroughs in medical knowledge […] Or it might enable a surveillance state of unprecedented intrusion and consequence.”

“By weaving these devices directly into garments, Intelligence Community staff will be able to record information from their environment hands-free, without the need to wear uncomfortable, bulky, and rigid devices” — IARPA SMART ePANTS program

According to the IARPA program description, “The SMART ePANTS program seeks to develop clothing with integrated audio, video, and geolocation sensor systems that feature the same stretchability, bendability, washability, and comfort of regular textiles.”

“By weaving these devices directly into garments, Intelligence Community staff will be able to record information from their environment hands-free, without the need to wear uncomfortable, bulky, and rigid devices.”

On May 11, 2022, IARPA gave a proposers day presentation, which revealed the potential applications for SMART ePANTS in various fields, including:

In one of the slides demonstrating the “expected garment environment,” the research funding arm for America’s spy agencies shows the smart clothing being worn in a civilian setting, where a person takes the clothing out of their closet at home, puts it on, drives to work, spends eight hours at their office or factory, and then comes back home again for a family dinner — all while still wearing the hidden tracking and recording devices.

Why would the intelligence community show someone using spy wear in a civilian setting where everything a person does in the privacy of their own home is being monitored, recorded, and downloaded?

Why would a business person want to secretly record audio and video of everything they see and hear at work?

What sort of future is being implied here?

Of course, there are many potential commercial applications of where this technology could help improve lives, especially in healthcare, but like with any technology, the data could be used for good or nefarious purposes.

SMART ePANTS is led by program manager Dr. Dawson Cagle, who came to IARPA in 2019 after an almost 13-year stint at Booz Allen Hamilton where he was an associate working on projects with the Advanced Research Projects Agency for Energy (ARPA-E), the Department of Homeland Security’s Explosive’s Division of the Security, Science and Technology Office, the FBI, and the Defense Advanced Research Projects Agency (DARPA).

Dr. Cagle’s is also the program manager for IARPA’s RESILIENCE program, which is aimed at “making sure that batteries can deliver needed power in extreme circumstances.”

In a recent interview, SMART ePANTS Dr. Cagle explained that one of his first inspirations to create the program came from his father, who is a Type 1 diabetic.

“I have spent my life watching him monitor his own health five times a day,” he said, adding, “I remember when cell phones first came out, and the power of a portable computer became available in the palm of my hand — how that occurred to me that could help my dad in many different ways.”

Sensors embedded into clothing can indeed be used to monitor the wearer’s health, as Dr. Cagle described.

However, IARPA’s vision for SMART ePANTS is to hide cameras and microphones into the very fabric of the garments, which could then collect data on everything the user sees and hears, including other people’s movements and conversations, as well as recording places and things.

The technological components, which must be designed to function together for the purpose of the SMART ePANTS program, include:

When combined, this type of data collection in a private setting could go far beyond the scope of healthcare and raise serious privacy concerns, especially if the various components were used to clandestinely record what was happening outwardly with regards to a person’s surroundings as opposed to recording what was going on inwardly within a person’s body.

As far as material goes, the US intelligence community wants the spy tech-embedded clothing to be washable, breathable, stretchable, and durable.

To make this possible, the American spy research funding arm is looking for “weavable conductive polymer ‘wires,’ energy harvesters powered by the body, ultra-low power printable computers on cloth, microphones that behave like threads, and ‘scrunchable’ batteries that can function after many deformations.”

The components must become natural parts of the clothing, such as zippers, buttons, grommets, and underwires, that can’t be removed.

“Internet of Thing devices are a growing source of data that can be collected to learn intent” — Dr. Catherine Marsh, IARPA Director, 2021

Speaking on the last day of the Department of Defense Intelligence Information System (DoDIIS) Worldwide Conference in Phoenix, Arizona in December, 2021, IARPA director Dr. Catherine Marsh explained that IoT devices, like the ones to be embedded in smart clothes, have now become a growing source of data for the Intelligence Community to collect, analyze, and learn about the intent of its adversaries.

“Internet of Thing devices are a growing source of data that can be collected to learn intent,” Dr. Marsh said at the conference.

“Developing these new sensors and detectors, as well as thinking about clever ways to collect multi-modal data to reveal what our adversaries are attempting to hide from us is at the very core of what our collection programs are aimed at doing,” she added.

IARPA’s SMART ePANTS program will have three phases of the course of 3.5 years.

Designing, developing, and building the technology will take 18 months.

Testing for integration and performance will take 12 months.

And the final phase will take another 12 months to test the garments’ durability and how well they do in the wash.

The SMART ePANTS goal is to build sensor systems that are comfortably integrated into primary clothing (e.g., shirts, pants, socks, and underwear), according to the program description.