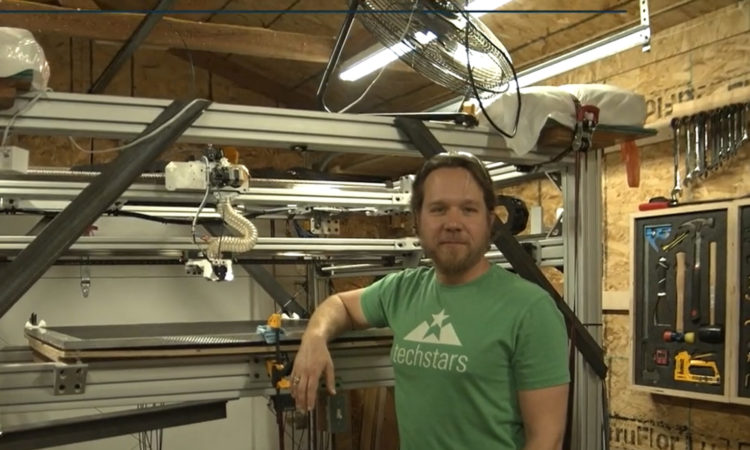 The tremendous environmental benefits of 3D printing is one of its less well understood aspects, says the CEO and co-founder of Accelerate3D, who believes such an advantage will help this transformative technology overtake traditional manufacturing methods in the coming years.

“A lot of people don’t necessarily realize that 3D printing is an incredibly energy efficient and sustainable way of manufacturing. This feature is so baked into the way 3D printing works that it’s not really ever viewed as a feature,” Riley Knox, whose Austin-based startup is “building the future of on-demand manufacturing”, told The Sociable.

The additive nature of 3D printing means less waste is produced, he explained, adding that this method also helps curb CO2 emissions as it embraces distributed production and reduces the need for extensive transport required in conventional mass manufacturing.

Other reasons that, according to industry experts, make 3D printing a crucial part of the efforts against climate change include the fact that it allows for making repairs instead of replacements, creating products from more environmentally friendly materials, and recycling the waste material.

They also say that the fast-growing technology streamlines the manufacturing process as much of the design process is carried out on computers, leading to efficiency gains and the need for fewer prototypes.

Knox, a mechanical engineer who co-founded Accelerate3D to pursue his burning passion for building things, sees a very bright future for the global 3D printing products and services market, which was valued at around $12.6 billion last year and is expected to reach $37.2 billion in 2026.

He and his expert team with decades of industry experience, including former senior software developer for HP, are contributing to the future of the additive industry with their patented technology that enables businesses to produce durable large-size parts in shorter times and for less money than ever before.

“Limited economies of scale, expensive minimum order sizes, long lead times, and high upfront costs create a valley of death that kills countless products and companies every year, says Accelerate3D, which is creating a bridge that will help companies of all sizes move from prototype to initial production in an unprecedented way.

Knox is confident that their mission and business model will add true value to small businesses in particular as their in-house 3D printers mean clients do not need to invest the money, time, and skill needed to run expensive, large-size printers.

“What makes us different is that we’re building machines, but we’re not planning to sell them and are using our own equipment,” he said, adding that they aspire to help bring affordable, accessible manufacturing back to the United States.

“I think we need to have an actual solid manufacturing base back here in the U.S., if nothing else for when the next pandemic hits or when the next big ship gets stuck in the Suez Canal, because relying on these really long, intricate global supply chains opens up a lot of fragility.”

In his opinion, having distributed production facilities across the country is also necessary to make the supply chain more resilient and making manufacturing a quicker, more cost-effective process.

That is why Accelerate3D plans to build out a nationwide network of small, local micro-factories to reduce the distance between where parts are printed and their customers.

With this vision in mind, the company is now raising capital for the first time ever to shape the next-generation of on-demand manufacturing services and enable a new category of cost-effective, low-run, high-quality production.

“The whole reason that we are raising this money is because we have so far done everything out of my garage,” Knox said, adding that the fund raised will be used to set up their first pilot facility, finish the last little bits of hardware development, and have their first set of 3D printers built and up and running.

“Assuming we raise $1 million and we are able to get our pilot micro-factory set up, build our minimum viable product and first service ready machine by Q3 ’21, and have a total of five machines running at 85% capacity by Q3 ’22 we anticipate generating $375k in revenue in the next 12 months,” reads the campaign announcement.

The pilot factory will be in Austin as the city is “very rapidly becoming one of the major technology hubs in the world, let alone the United States, and we’ll have much better access to talent here,” added the CEO of Accelerate3D, one of the 10 companies chosen to join the 2019 STANLEY+Techstars Additive Manufacturing Accelerator program.

Asked how much of the 3D printing process is currently automated, Knox said, “It’s probably at about 60% right now, but that’s going to jump up to around 90% over the next three to five years.”

This is one of the areas that Accelerate3D is interested in and focused on, he explained, noting that they intend to use autonomous mobile robots to automate the post-processing and unloading steps as much as possible.

As for other common misconceptions about 3D printing, the co-founder of Accelerate3D said many people are under the impression that it is still not ready.

“One of the biggest things that we’re going to be spending a whole lot of time focusing on is educating that 3D printing has pretty much been ready for prime time when it comes to producing final use parts for the last three to five years. It’s just the majority of people who would take advantage of it—like the engineers, product managers, and chief technology officers—don’t know that,” added Knox, who is a mentor at the Founder Institute, the world’s largest pre-seed startup accelerator.

His experience also shows that a lot of people think materials used in additive manufacturing are not very strong or are not as good as some other options.

“There are now 3D printing materials that have a similar strength-to-weight ratio as metals like aluminum but cost a whole lot less, are a lot easier to produce, and have characteristics such as corrosion resistance and chemical resistance.”

Another mistaken belief that Knox has run into is that “a lot of people seem to think that you only kind of print one thing.”

“This is a myth because you optimize 3D printing for a material, rather than a product, and then the 3D printer can make anything that can be made out of that material,” he said.

On the social impact of 3D printing, especially in developing countries, the CEO of Accelerate3D said it opens a vast world of possibilities for bringing true manufacturing to developing areas that otherwise would not have access to that “because they are not plugged into these kinds of long tail global supply chains.”

“If you have essentially a factory in a box, then you can just drop it somewhere and start making lots of cost-effective and quite often recyclable products for people in that region,” Knox said, expressing confidence that his startup can revolutionize the industry through high-speed, affordable 3D printing.