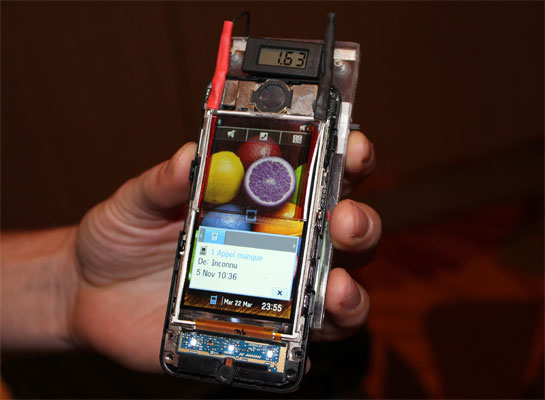 Credit: Laptopmag
2.46Kviews
How long do you get out of your Android or iPhone’s battery? A day, possibly two?

For all the hype of smartphones we rarely speak about just how bad their battery lives are.

One French start-up thinks they have a solution, solar panel touch screens. Wysips an award winning young company from Provence have created a paper-thin photovoltaic film which can generate an electrical charge from any light source. The company claims that the transparent film can be fitted over a smartphone or tablet’s screen without affecting the sensitivity of the touch or dimming the screen’s brightness.

According to Laptopmag who produced the video and image above “the technology will fully charge a typical cell phone battery in 6 hours of outdoor light, but it would take longer indoors to fully juice a handset. With the second-generation technology that will arrive next year, you’ll have enough juice for 30 minutes of talk after just an hour of charging.”

According to Wysips if two billion smartphones contained the technology they would produce the same amount of electrical power as a nuclear power station. But the company isn’t just looking at smartphone or tablet devices, they have bigger horizons, the company says “any image, or any visible surface can become a photovoltaic source. [The technology] is poised to put electrical power sources into places and objects we have only imagined until now: mobile phone and computer screen, clothes, books, cars, houses, etc.”

Source: Read a full review of the technology on Laptopmag’s blog, @laptopmag.