HomeTechnology‘Space debris is the speed bump on the path to the trillion-dollar space economy’: Office of Space Commerce Director
Technology

Near collision in space spooks stakeholders into addressing 20,000 pieces of debris orbiting Earth 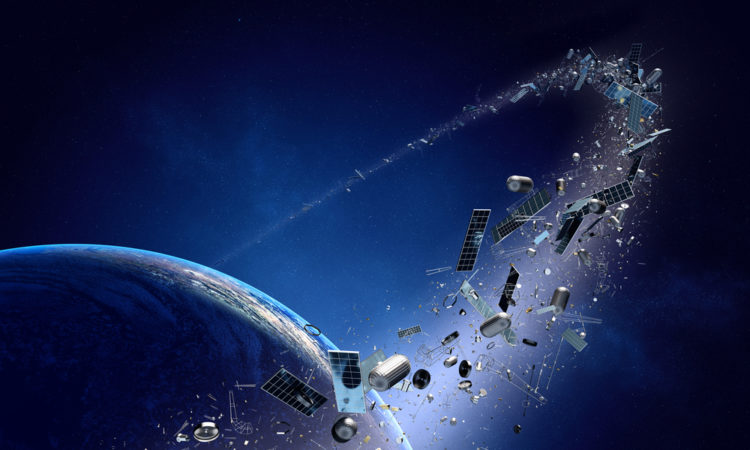 “Space debris is the ‘speed bump’ on the path to the trillion-dollar space economy,” according to testimony in the Senate from the director of the US Office of Space Commerce.

Just a few weeks ago two pieces of space debris almost collided over Pittsburgh at speeds of over 30,000 mph, which was enough to spook stakeholders into calling two Congressional hearings to address the congestion of more than 20,000 pieces of debris orbiting Earth.

The objects that nearly ruined everybody’s day in space on January 29, 2020 were an experimental Air Force craft from the 1960s and a decommissioned NASA space telescope deployed in the early 1980s, which missed each other by just 18 meters!

“Some experts predict that if the two relatively large objects had collided, at a relative speed of almost 33,000 miles per hour, they could have created a debris cloud of up to 15,000 debris objects, one of the largest such events in the history of spaceflight,” according to Kevin O’Connell, Director of the Office of Space Commerce at the Department of Commerce, who testified in a Senate hearing on “Space Missions of Global Importance” on Wednesday.

On Tuesday a similar hearing in the House on “Space Situational Awareness” revealed that having “more than 2,200 active satellites in orbit along with more than 20,000 pieces of cataloged orbital debris” presents a significant problem of congestion with the occasional near-miss collision scenario.

It’s not so much that people are worried that these mechanical celestial bodies fall down to earth, but rather that these derelict dumpsters of space waste could collide and break up into thousands of pieces.

“A paint chip travelling at thousands of miles per hour can do serious damage to a solar panel, fuel tank, or satellite”

When it comes to orbits, what goes around comes around — like watching karma in real time.

“Even a paint chip travelling at thousands of miles per hour can do serious damage to a solar panel, fuel tank, or other critical part of a satellite,” O’Connell submitted in his written testimony.

So, how does this affect you and me, and what needs to be done about it?

If space situational awareness isn’t addressed and satellites start bumping into one another, it could create a chain reaction of destruction as debris clouds collide, and they all topple like dominoes, or it could just keep increasing the sizes of the debris clouds, causing more clutter.

We might take for granted that we rely on space for internet, radio, cell phones, TV, and many modern devices, so preventing collisions is in everyone’s best interest.

“Three American companies have applied for licenses to launch a combined 57,000+ satellites over the next decade”

Compounding the congestion issues are plans to launch even more satellites into an already clogged and cluttered environment.

According to O’Connell, “Space Traffic Management is bound to become far more complex, given current and planned future space operations.

“In 2020 alone, Space X and Europe’s Arianespace have planned over 20 launches each. China is also planning over 40 launches this year. Many of these launches are designed to release over 20 satellites.

“If the launch plans for Space X and OneWeb in 2020 go as planned, the two companies alone will launch over 1,000 satellites, all to low earth orbit. Looking ahead, three American companies have applied for licenses to launch a combined 57,000+ satellites over the next decade,” he added.

So, what’s to be done about space junk?

“Who has the authority over the orbital domain? How do you regulate it, if you don’t own it” — Dr. Ruth Stilwell

According to Office of Space Commerce director, the United States and its allies need better ways of monitoring and tracking all debris, and all space faring nations need some type of regulation for how much stuff they put up there in orbit and how it’s used.

On the tracking and monitoring front the fact that “the Department of Defense prioritizes monitoring threats to active satellites and the International Space Station,” means that the DoD didn’t even initially assign assets to address the near-miss over Pittsburgh because they weren’t “active.”

It was actually a private company, LeoLabs, that “provided the initial and subsequent warnings of the possible conjunction.”

Space monitoring is a big component of safety in space. Another component is regulation.

“In the Department’s view, the best possible approach right now to ensuring that space is used in a safe and sustainable way is to better understand what goes on there. Only then can the best possible regulatory instruments be crafted to ensure space safety,” O’Connell testified.

“Unless we carefully consider the impact of regulation, space operators will simply take their investment capital, ingenuity, and potential space risk and launch from another country. Such an approach will allow us to ultimately drive right-sized regulatory requirements at federal and international levels,” he added.

“From a policy perspective, international maritime agreements may provide the more instructive model”

Meanwhile, over in the House on Tuesday, Senior Non-Resident Scholar at the Space Policy Institute of George Washington University Dr. Ruth Stilwell testified that the best approach for regulation was to look to the maritime law as a model.

“Who has the authority over the orbital domain? Quite simply, how do you regulate it, if you don’t own it? This is where we find clear parallels to the maritime domain,” she submitted in her testimony.

“If we are to develop a space traffic management regime for the purposes of preserving a safe and sustainable orbital environment, an evolution from a non-armament construct to one that facilitates safe and accessible commercial use is needed,” she added.

“While the technology of space operations may be more similar to aviation, from a policy perspective, international maritime agreements may provide the more instructive model.”

Monitoring objects in orbit and regulating future launches for safety and sustainability are fine and dandy for the future, but what can be done about the derelict disks that dance around our Earthly domain?

Will there be an orbital cleaning crew?

“NASA and other space agencies have concluded that actively removing existing orbital debris (ADR), a process also known as remediation, will be necessary,” Dr. Brian Weeden, Director of Program Planning at the Secure World Foundation testified in the House on Tuesday.

“If the goal is to reduce the growth in the debris population and reduce the threat over the long term, then the objective should be to remove five to ten of the largest debris objects per year.

“If the goal is to reduce the threat to operational satellites in the short term and medium term, then the objective should be to remove the small debris objects in the size range between 1 and 10 centimeters (0.4 and 4 inches).

“These objects are too small to be tracked by current space surveillance systems, and while an impact with them is unlikely to result in a catastrophic collision, it could severely damage or be lethal to an active spacecraft,” he added.

Cleaning up space debris “doesn’t have a silver bullet solution” according to Dr. Weeden, but organizations are working on tech and techniques such as changing their orbits, altering their trajectories, or even towing them away.

Last year, Stanford University, together with the European Space Agency, challenged AI programmers to develop a type of “tow truck” to collect derelict satellites that are seen as space junk circling in graveyard orbits.

According to Stanford News, there are inactive satellites that are “too high to burn up in the atmosphere, yet too slow to escape Earth’s gravity,” so they continue to ride on a never-ending merry-go-round in space.

Revolving like turds in a toilet in a never-ending flush, derelict satellites continue to swirl around the earth in graveyard orbits.

What ‘overwhelmingly classified’ technologies could the Space Force disclose?