If AI doesn’t have the ethics of Buddha, Terence McKenna once said, then the human race may be down for the count.

Is AI God or Demon? Salvation or extinction? This is what puzzled the late Terence McKenna over 20 years ago, and has never been more prevalent than today.

One of the most widely-speculated debates among philosophers, scientists, and programmers is can an AI be conscious, and what is the difference between biological humans and machines when it comes to programming code?

The late psychonaut knew of the potentially rapid evolution of AI during a time when it was still emerging from the realms of science fiction.

For McKenna, he always believed that natural models were the best when developing new technologies, whether it be the Internet, Virtual Reality, or Artificial Intelligence.

In the 1990s he postulated, “Now a new vision looms – building as nature builds — building atom by atom […] As our understanding of the genetic machinery that supports organic being deepens, and as our ability to manipulate at the atomic and molecular level also proceeds at pace, we are on the brink of the possible emergence of some kind of alien intelligence of a sort we did not anticipate.”

Reaching back into mythology, of which humanity may draw many lessons as it pertains to creation, McKenna reminded that AI may be upon us without warning “in the same way that the daughter of Zeus sprang full-blown from his forehead.”

The Internet is structured like an organism. It’s visual appearance when mapped out looks the same as biological cells in complex organisms, and it mimics the structures of galaxies and even mycelium. 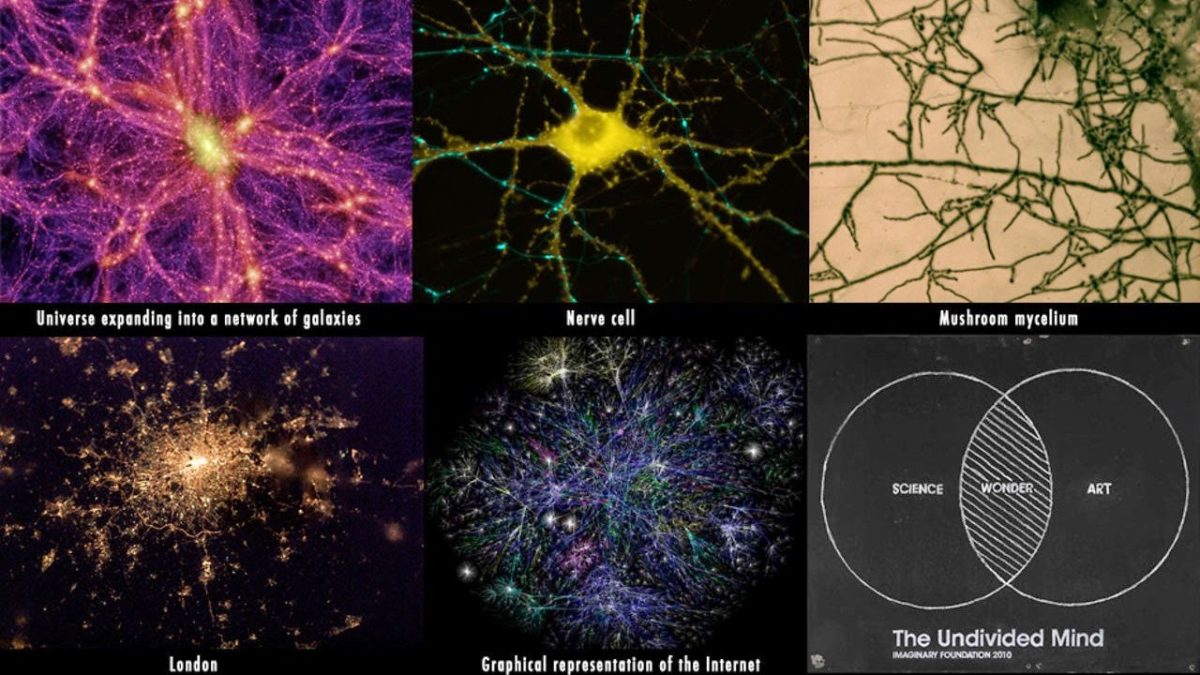 Through this web-like structure, new connections between synapses can be made, which in the case of the brain, can lead to new ideas, visions, and understandings that were never before contemplated.

Add psychedelics to the mix, of which McKenna was one of the greatest proponents, and this flow of information becomes even more complex and can take on a mind of its own. This is the sort of “alien intelligence” that McKenna referred to.

“Complex systems generate unexpected connections and forms of order. The Internet is the most complex form of distributed high-speed system ever put in place on this planet, and notice that while we’ve been waiting for the Pleiadians to descend or for the face on Mars to be confirmed, all the machines around us, the cybernetic devices around us, in the past 10 years have quietly crossed the threshold into telepathy,” said McKenna.

Wait a second! Telepathy? What did he mean by that? It appears that he was describing a superintelligence so rapid and advanced that its anticipatory nature would far surpass anything we humans could comprehend as we live in “real time” while machines would operate in a sort of hyper-time, keeping in mind that, mathematically, time is a result of the relationship between distance and speed.

“In addition to overlooking that our machines have become telepathic, we fail to appreciate what it means to be a 200, 400, or 1,000 megahertz machine. We operate at about 100 hertz. That may seem a very abstract thing, but what I’m really saying is we live in a time called ‘real,’ and it is defined by 100 hertz functioning of our biological processors. A thousand megahertz machine is operating a million times faster than the human temporal domain, and that means that mutation, selection, adaptation is going on a hundred million times or a million times faster.”

AI in other words, won’t evolve over millennia like organic life, but it will come swiftly and seemingly overnight.

“What it took us to achieve in 100,000 years of evolution, this thing could probably achieve in a long morning,” according to McKenna.

This brings us back to the question of AI being God or Demon, salvation or extinction.

McKenna wondered, “What will this child of ours make of us? Will it define us as resource-corrupting, toxic, inefficient, hideously-violent way to do business — quickly to be engineered out of existence? Or can we somehow imbue this thing with a sense of filial piety, so for all of our obsolescence, for all of our profligate destruction of precious silicon and gold and silver resources, we will be folded-in to its designs?”

Finishing off with the question of whether AI can be conscious, McKenna’s veiled answer was seemingly “yes” because AI would be an extension of humanity, but I’ll let his words speak eloquently for themselves.

“I think that the great lantern that we must lift to light the road ahead of us into a perfect, seamless, fusion with the expression of the product of our own imagination is the AI. It is a part of ourselves. It may become the dominate part of ourselves, and it will reshape our politics, our psychology, our relationships to each other and the earth far more than any factor ever has since the inception and establishment of language.”

As for the Turing test, according to McKenna, “Intelligence is the art in the eye of the beholder. How do you now that I am not a cyborg? How do I know that you are not a cyborg? The answer is we Turing test each other unconsciously at sufficient depth to satisfy ourselves. It becomes moot, or it is becoming moot.”

In other words, if AI is product of our imagination and creativity and it passes the Turing test, then like the theory that consciousness creates reality, the very act of observing and believing that an AI is conscious would make it so.