“We’re not debating theories or playing games; this is the future of humanity”: A conversation with two leading pioneers in LATAM’s impact investing sector 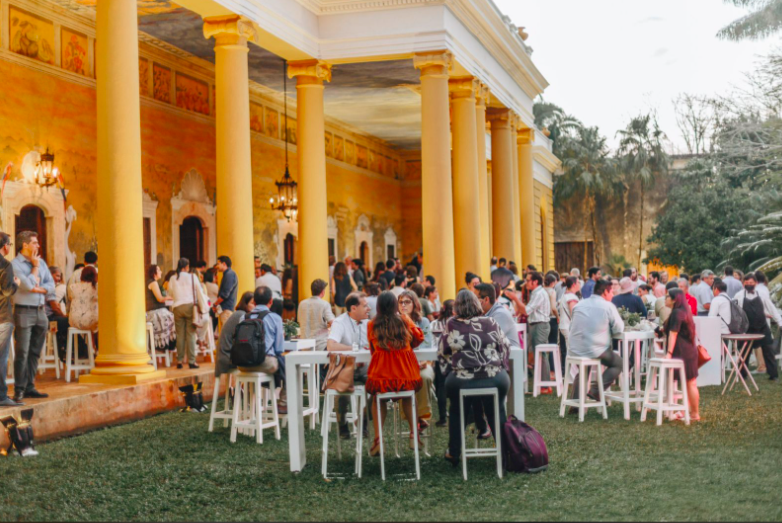 It is still early days in Latin America (LATAM) for sustainable investment practices that seek to achieve a social or environmental goal and generate a profit. But the Latin American Impact Investing Forum (FLII), which just took place in Mexico between the 15th and 17th of March 2022, is trying to change this.

The unique event held in Merida, a colonial town surrounded by Mayan ruins, brings together a spectrum of players from the LATAM impact investing sector — under several hacienda roofs —  for a three-day event consisting of networking, keynote speakers, and more intimate seminar-type talks. Investors’ drinks quickly broke the ice when impact investors dressed up as bartenders and served social entrepreneurs, opening the doors to conversation and unparalleled collaboration.

The event is organized by New Ventures who facilitate interactions between impact investors and social entrepreneurs, execute various acceleration programs, and operate the investment vehicles VIWALA and New Ventures Capital – all to advance the impact investing agenda.

The Sociable sat down with the Founding Partner of New Ventures and Chair of the GSG National Advisory Board in Mexico, Rodrigo Villar, and Chief Policy Officer at GSG and former Secretary of State for Socio-Urban Integration at Argentina’s Ministry of Health and Social Development, Sebastián Welisiejko. Here’s what they expect from LATAM’s impact investing ecosystem in the next couple of years and what the Western world could learn from LATAM’s approach.

At FLII, speakers mentioned how this was an exciting moment for impact investment. Why?

RV: It is an exciting time for the general entrepreneurship community worldwide, and LATAM has been one of the regions that has benefitted the most. Over the last couple of years, the number of impact funds investing in entrepreneurs and available resources has grown exponentially. There were just two or three venture capital funds in the past, but now entrepreneurs are more supported than ever before.

Also, many new sources of investors are coming to the market. When we first started our venture capital fund, the only investors were large family offices or development banks. Now, there’s a flow of new investors and angel investors putting smaller investments of $10k to different funds and building portfolios.

Foundations have also realized that their traditional philanthropy is not going anywhere, and they need to pull resources more sustainably. They are deploying endowments, too, not just grantmaking.

SW: More than exciting, it is a decisive time. The first time I came to FLII in 2015, people discussed the “what” – the need for education and raising awareness – as impact investing was a new term for many. Years after, the conversation changed to the “how”: the mechanisms, metrics, techniques, risks, and blended capital. In this year’s FLII, we discussed the “when” due to the sense of urgency with 2030 around the corner.

When FLII started, the SDGs were 20 years away – now they are eight. And we are not seeing a massive improvement in bridging financial gaps. The pandemic certainly pushed us backward too.

It is a decisive moment of truth. In a few years time, we will see if our movement provided the capital needed. We are not debating theories or playing games; this is the future of humanity and the planet.

How do different LATAM countries’ impact investing ecosystems differ? How has this affected the countries’ progress?

SW: People draw similarities between different LATAM countries, but the region is vast and diverse. Government systems and markets are very different from one country to another.

As an economist, I believe that you can’t fully separate the impact investment ecosystem from traditional investment. Some countries have very fragile microeconomies, leading to fragile environments for any type of business. In Argentina, where I come from, we’ve had annual inflation of over 50% for four years now. All investment is in jeopardy, not just impact investment.

Despite turmoil and conflict in Colombia, Mexico, and Chile, however, the macroeconomic fundamentals remained – and that’s a positive. Impact investment in those three countries is more vibrant than ever and becoming more mainstream. But are we reaching the required scale or not?

RV: It is a matter of the size of the economies and different regulations as well. When you talk about venture capital, you need scales. For entrepreneurs doing business in Honduras, for example, it is a fragile economy but also tiny. And the countries where we are seeing the largest number of unicorns coming to the market are often technology-orientated and have a regional approach rather than country-by-country.

As men supporting gender smart businesses and investment practices, what needs to be done to empower female impact entrepreneurs and investors further?

RW:
Banks do not often differentiate their offerings for specific communities, like female entrepreneurs running companies. Impact investing, therefore, should be more inclusive by providing products for different social groups. We need gender lens investing for women-led enterprises for the greater ecosystem to look at financial risk measurement and creative analysis approaches and understand the female viewpoints about what being responsible means. At New Ventures, we are working on different payment systems and evolving traditional forms of credit risk analysis.

The same applies to marginalized groups. We worked with a German foundation, BiodivERsA, working with LGBT+ communities. When looking at the transgender population, sometimes they don’t have IDs due to name changes, and their life expectancy can be extremely low. At a traditional bank, their loan request could be easily rejected. Instead, we needed to build additional credit and financial mechanisms for them and design personalized products.

Today, many people are deploying genius strategies to impact women positively, but with the hype, I’ve also witnessed gender-washing; some companies believe if they tick the gender box, they’ll have a better chance of receiving capital.

As gender can be abstract, we need solutions that are issue-centered or born out of an understanding of the issue. For example, if you work on a place-based strategy in informal settlements, what is gender in that particular context? It can mean domestic violence, childcare issues, unfair labor force participation, and teenage pregnancy, among many other aspects.

People who arrive externally from the center of a metropolitan city can sometimes come up with the wrong solutions. We must sit down, listen, and truly understand the problem to do honest gender investing.

What lessons can the impact investing sector in Europe learn from LATAM?

SW:  In LATAM, many solutions emerge from the communities themselves rather than external people wanting to serve a community they don’t belong to. What impact means in a European or North American context is quite different: The beauty of LATAM is the freedom to interpret in an idiosyncratic approach what impact means.

Entrepreneurs in LATAM also operate in often volatile and fragile environments, so people have to continuously adjust. However, this adaptability has arisen due to the wrong reasons. And this isn’t only in LATAM; I’ve witnessed it in Palestine, Turkey, Egypt, among others.

The war we are witnessing in Europe right now makes me wonder how the markets will react and the global north will adjust.

Impact investing is still a niche term to some in LATAM. How can we change that?

RV:  At New Ventures, our role has always been investing in and supporting entrepreneurs, creating funds, and also building a research center looking at how to measure impact. The FLII started to engage more people and grow the ecosystem. When we started, we were two or three people talking about impact investing in Mexico and sharing best practices with others in Brazil, Colombia, and Chile.

There are so many more things to be done. We need to work with the press, get real success stories, and show the general population the positive effects of thriving social entrepreneurs. Universities need to add impact investing to their curriculum too. Here, in Mexico, a couple of universities have created centers for impact investing. But this needs to go much further.

I work for a global organization that is essentially an ecosystem builder. I wouldn’t say that people talking about impact investing on the street is a measure of success. The taxonomy is important for practitioners to build stronger standards and guarantee the integrity of data, but ultimately, the reality is more important than the taxonomy. For ordinary people to embrace these solutions, the best we can do is show outcomes and results.

It is like a striker joining a football team; people expect the striker to score. If game one, the striker doesn’t play well, and in game three they are injured, people start questioning their ability.

We can’t expect people to fall in love with the concept and for impact investing to become mainstream unless we prove it works and improves lives.

Note: Sebastián is an economist with extensive field experience and policy work in economic development, impact investment, conflict economics, and socio-urban development. Rodrigo is a social entrepreneur with a clear objective of changing paradigms of business to generate a positive impact for society and the planet.