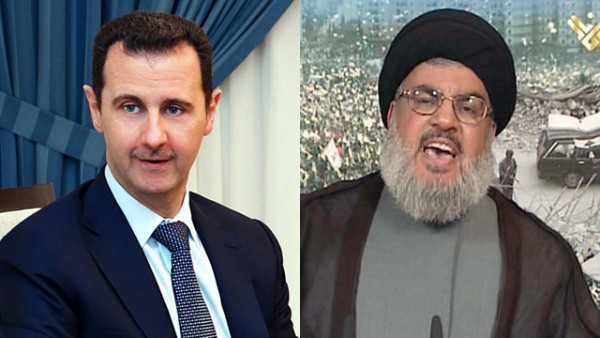 Syria’s President Bashar al-Assad and Hezbollah’s leader speak out on why they believe the United States is fighting an “illegal war” in Syria.

Today we take a look at what two major Arab players in the Middle East think about the United States’ presence in Syria. Here we review what Syria’s head of state had to say in an interview with NBC Nightly News last month about America fighting an “illegal war,” as well as comments by the leader of Lebanon’s Hezbollah group, Hassan Nasrallah about how he believes the conflict in Syria is a continuation of the 2006 July War between Lebanon and Israel.

Based upon the latest interview by NBC, President Assad has called the United States strikes against ISIS in Syria “counter-productive” and that Russia is the only ally achieving any significant gains in the fight against terrorism.

The Syrian head of state also pointed out that Russia is the only foreign country “legally” permitted to operate in the country, and that the US presence is an illegal one.

When asked if America wasn’t being ruthless enough in their bombing campaigns against ISIS, Assad remarked that firstly, the US government is fighting an illegal war, and secondly, it isn’t genuine about its intentions with ISIS.

According to the Syrian president, the United States doesn’t want to defeat ISIS, but rather control the terrorist network.

To further back up his claim, Assad pointed out that ISIS began under the watch of the United States in 2006 when the group began to foment in Iraq. Former UN Secretary General Kofi Annan stated in 2004 that the US-led coalition in Iraq was also fighting an illegal war.

“ISIS has been setup in Iraq in 2006 while the United States was in Iraq — not Syria was in Iraq, so it was growing under the supervision of the American authority in Iraq, and they didn’t do anything to fight ISIS at that time. So why fight it now? They don’t fight it now.”

However, despite all the claims by human rights groups and the United Nations that Assad used chemical weapons against his own people, he dismissed those outright without much explanation — only that there was no evidence and that it wouldn’t make sense for him to do so.

The UN issued a report yesterday saying that its research panel “found what it described as ‘sufficient evidence’ of three cases of chemical weapons use – two chlorine gas attacks on civilians by the Syrian air force, and another use of ‘sulphur-mustard’ gas by the terrorist group ISIL, or Daesh – in Syria between 2014 and 2015.”

The research panel; however, admitted that they did not actually send people on the ground to collect samples, and that they had to rely on third-party information from “a Fact Finding Mission (FFM) mandated by the Organisation for Prohibition of Chemical Weapons (OPCW)” in The Hague to corroborate their conclusion.

A member of the UN panel made a harrowing remark that throws muddy water on the lens of perception as to what groups are actually capable of deploying chemical weapons in Syria.

“There are more actors today in Syria with the availability of the substances and the ability to mix them and use them, if they so choose, as chemical weapons; and this is something very worrying.”

Read More: Turkey takes a bite of the Syrian pie and is hungry for more

If you ask Hassan Nasrallah, chief of Lebanon’s Hezbollah movement, why he thinks the war in Syria broke out, he will tell you that it is a continuation of the July War in 2006 between Israel and Lebanon, and that Lebanon is the first target for the US and Israel to wipe out before being able to topple Assad’s regime in Syria. The ultimate target, after Lebanon and Syria, is Iran, according to the Hezbollah secretary general.

For Nasrallah, Israel wants to go after Iran, but it doesn’t share a border, and that complicates movements as Israel wants a clean, direct strike. The leader of Hezbollah — an organization that is considered a terrorist group by both the US and Israel — said that Syria is not merely a bridge to Iran, but its refusal to bow to foreign political will and its refusal to give up its sovereignty are all reasons why the Israeli and American governments want to topple Assad.

What is Israel’s alleged role in Syria?

The Sociable has reported on US General Wesley Clark’s comments that the US listed 7 countries to invade following 9/11 and both Lebanon and Syria were on that list.

We reported the major reasons for going to war in Syria being the control of oil and international banking influence, and these comments from Hezbollah add another dimension to the complexity that is the Syrian War as well as the entire Middle East conflict.

Israel is being implicated as a major influence in the Middle East, pulling the strings of the American government in Syria while keeping their own military out of the conflict while simultaneously preparing for an invasion of Lebanon from the South while Hezbollah is busy fighting ISIS in the North.

Now Turkey has joined the fight and won’t leave. Russia continues to aid the Syrian military as a welcomed guest, and Assad claims American intervention is illegal, un-welcomed, and counter-productive in the fight against ISIS because.

According to Assad, the US government has never been “genuine” in its attempts to defeat the terrorists — only control them as pawns in their most dangerous game, just as Turkey used the Kurds in the same manner.