Can Irish search traffic on Google predict the outcome of the 2011 general election? Piers Dillon-Scott examines if Google really can gauge the mood of the people.

Fine Gael will be the largest party in the 31st Dáil, with just under 40% of the vote, if search traffic on Google translates into first preferences on February 25.

Fine Gael would be able form a coalition government, controlling 52% of the Dáil, with the labour party and a small number of Independents. Fianna Fail would be the largest party in opposition, followed by Sinn Fein.  The Green Party would become the smallest party taking less than 7% of the vote.

‘Google Votes’
Using Google’s advertising research site, “Google Insights for Search” we compared the number of searches for each political party, including independents, during the week beginning Monday February 7 and ending Sunday February 13 2011 to see which were most Googled political parties in Ireland.  Google Insights for Search is a website from Google that is designed to allow advertisers compare the popularity of different search terms to one another.

By comparing the names of the different political parties and limiting the search to Ireland we examined which parties were the most searched for last week. Using this information we converted the relative search traffic to percentage points to plot which parties would receive most and least ‘Google votes’.

With this the results showed that, 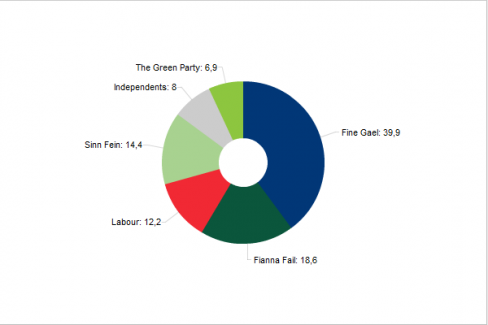 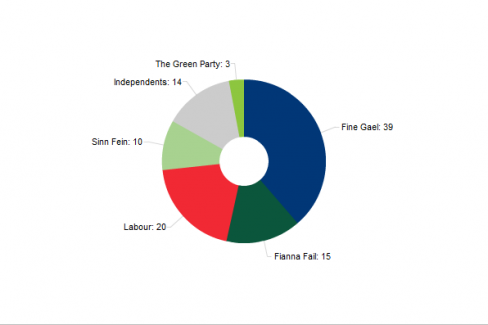 While this data might not give us the actual margins of the 2011 General Election it does tell us a few things. Fine Gael has been the most successful party online, Irish users are actively seeking their content. A similar story is true for Sinn Fein’s supporters. Dispite a change in leader Fianna Fail have not reignited anything near the levels of support that they saw during the days of the Celtic Tiger. It is interesting to speculate if their stronger-than-expected results point to some latent Fianna Fail support, although it must be said that such searches don’t necessarily mean support.

Of course this is not a scientific study, but such crowdsourcing methodologies have in the past proven quite accurate. Study by the University of Manchester and Indiana University published in October 2010 (PDF | 349 KB) showed that Twitter is 88% accurate in predicting the ups-and-downs of the US stock market. And such systems designed to measure the mood of the social web are already being employed by traders in the US.

Full Disclosure
The methodologies we used here are limited. For example, as the search term “independent” is so generic it would be unreasonable to use it to in this study. For the purposes of this experiment the word “candidate” was used.

Follow the public mood live on Google Search
You can follow the popularity of the five main political parties on Google Insights for search and on the graph below.

Please note this live graph from Google shows the popularity of the five main political parties (excluding Independents) over the past seven days and for the same seven days used for this study.