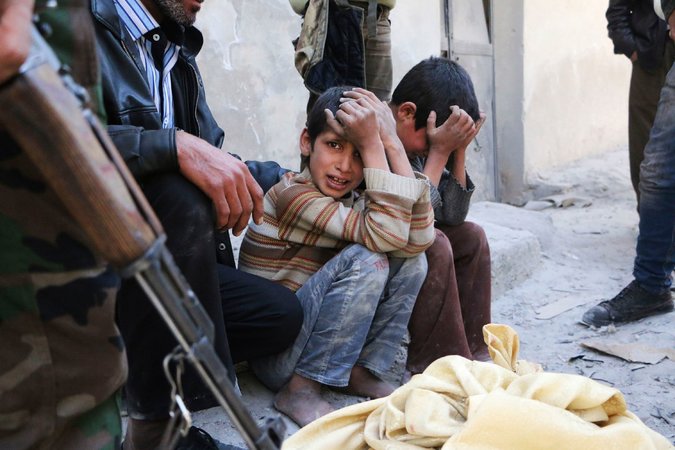 The United Nations throws its proverbial hands in the air, citing it makes no sense to send humanitarian aid to Syria until there is a pause in the fighting.

Not a single, solitary humanitarian convoy has reached any of its targeted besieged areas in August due to the ravaging war in Syria. The fighting is simply too intense to provide any aid.

This comes just after a video of 5-year old victim, Omran Daqneesh, surfaced with his face, bloody and full of dust; shocked, bewildered, and completely non-respondent. The images struck a nerve with the world population, and the public is slowly beginning to take notice of the devastation taking place on a daily basis in Syria.

“I decided to use my privilege as Chair to declare that there was no sense in having a humanitarian meeting today unless we got some action on the humanitarian side in Syria,” UN Special Envoy for Syria Staffan de Mistura told reporters in Geneva.

The Special Envoy for Syria has since made a plea to the Russian and Syrian governments to halt bombing campaigns for at least 48 hours so that the UN could supply desperately-needed aid.

“The United Nations count on the Russian Federation to deliver their part, regarding, in particular, the adherence of the Syrian armed forces to the pause, once it comes into effect,” reported Mistura.

The UN Special Envoy also called on American opposition to ensure that it “respects the 48-hours humanitarian pause.”

‘Heavy Lifting’ required before US, Russia agree to 48-hour pause

The man who filmed Daqneesh’s rescue said that pulling children out of the rubble is far from anything new.

“These are children bombed every day. It’s not an exceptional case,” Aleppo-based journalist Mustafa al-Sarout told The Guardian. “This is a daily fact of Russian and Syrian government airstrikes. They take turns bombing civilians in Aleppo before the whole world. This child is a representative of millions of children in Syria and its cities.”

The UN Envoy stated that Russia and the US have “a genuine intention of finding a non-military solution, but a 48-hour pause in Aleppo would require ‘some heavy lifting’ from not only the two co-chairs, but from those who have influence on fighting on the ground.”

Heavy lifting? Does he mean actual lifting, like the tons of rubble, bones, and bodies that have to be cleared? Doubtful. Or is it that the US and Russia have opened-up a type of Pandora’s Box from Hell that even they can’t control their own war machines?

What is also alarming is the end of the quote about “those who have influence on fighting on the ground.” Who are those people? It would seem logical that it would be the US-backed rebels, whose warring factions have begun uniting, as well as the Islamic State.

There had been a divide in the US intelligence community over whom the rebels actually were. Thrown into the mix is the so-called Islamic State, who actually received weapons from the US that were meant for the rebels.

The BBC reported that rebel factions in Syria had broken the government siege of Aleppo by uniting the various rebel groups.

“UK-based activists say the rebels have indeed managed to link up with their comrades in eastern Aleppo.”

“Their assault,” CNN reports, is “the first test for a new group born out of al Qaeda’s Syrian affiliate — appears to have taken the exhausted Syrian army by surprise.”

The US doesn’t have any combat troops on the ground, so instead it has sent weapons and money to rebel groups that they have no control over. The only mission is to oust Syria’s President Bashar al-Assad at whatever cost, which would then allow for multinational oil companies, big banking, and business to step in.