HomeBig TechSenate is hovering over Twitter & Facebook: Dorsey, Zuckerberg to both testify before & after election
Big TechGovernment and PolicySocial MediaTechnology 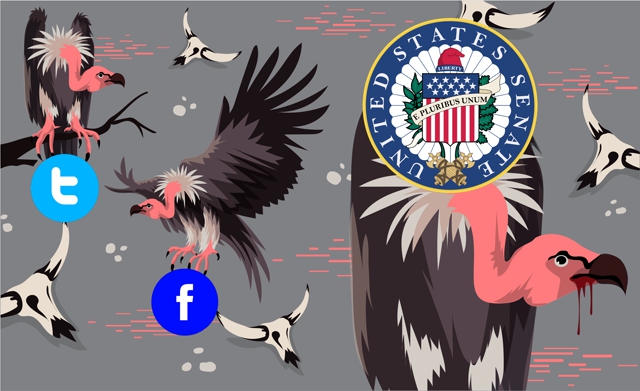 Two Senate committees are hovering over two big tech targets, with Facebook CEO Mark Zuckerberg and Twitter CEO Jack Dorsey both slated to testify in two hearings on Section 230 and censorship, before and after the US presidential election.

The first hearing on Section 230 is scheduled for this Wednesday, and both the Twitter and Facebook CEOs are also slated to testify on their companies’ handling of the 2020 election, including censoring news stories, two weeks after election day.

Both Dorsey and Zuckerberg agreed to testify voluntarily before the Senate Judiciary Committee in a hearing slated for November 17.

The big tech CEOs will be on the record, and whatever information they give or don’t give can have a meaningful impact on policy down the road, even if it doesn’t seem like it in the moment

Senate Judiciary Committee Chairman Lindsey Graham issued a brief statement on Friday announcing, “The hearing will focus on the platforms’ censorship and suppression of New York Post articles and provide a valuable opportunity to review the companies’ handling of the 2020 election.”

A lot can happen between now and then.

Before that; however, both Zuckerberg and Dorsey will be joining Google CEO Sundar Pichai in testifying on a different subject in front of a different Senate committee this Wednesday.

On October 28, the three big tech CEOs will testify before the Senate Commerce, Science, and Transportation Committee to “examine whether Section 230 of the Communications Decency Act has outlived its usefulness in today’s digital age.”

The hearing taking place before the election looks to examine the big tech companies’ content moderation practices while exploring “the impact of large ad-tech platforms on local journalism and consumer privacy.”

So, the Senate will hold two hearings in three weeks with the Twitter and Facebook CEOs that will gather testimony on topics such as how big tech impacts journalism, moderates content, and handles elections.

Whenever lawmakers drag big tech company reps into giving testimony, it seems like no real change will ever take place afterwards, but the DOJ smacked Google with an antitrust lawsuit just three months after Sundar Pichai gave his last testimony

The last time the big tech CEOs testified before lawmakers in July, Recode ran a story with the headlines, “The Big Tech hearings won’t lead to real change. That’s okay,” and, “The heads of Apple, Facebook, Google, and Amazon are going to get grilled. But that won’t lead — directly — to regulation.”

However, less than three months after Google CEO Pichai testified before the House Judiciary Committee on July 29, the Department of Justice (DOJ) and 11 state attorneys general smacked his company with an antitrust lawsuit — “the most important antitrust case in a generation,” according to Senator Josh Hawley.

The DOJ antitrust lawsuit didn’t mention testimony from hearings in the Senate or the House, but one can find similar rhetoric among them.

For example, you may compare what House Judiciary Committee Chairman David Cicilline told Pichai during July’s hearing with what the DOJ said in its lawsuit on October 20.

“As Google became the gateway to the internet, it began to abuse its power. It used its surveillance over web traffic to identify competitive threats and crush them. It has dampened innovation and new business growth, and it has dramatically increased the price of accessing users on the internet, virtually ensuring that any business that wants to be found on the web must pay Google a tax.”

“By restricting competition in search, Google’s conduct has harmed consumers by reducing the quality of search (including on dimensions such as privacy, data protection, and use of consumer data), lessening choice in search, and impeding innovation. By suppressing competition in advertising, Google has the power to charge advertisers more than it could in a competitive market and to reduce the quality of the services it provides them.”

The language between the two is similar.

If you tune in to the hearings and find them disappointing or lacking, remember that the big tech CEOs will be on the record, and whatever information they give or don’t give can have a meaningful impact on policy down the road, even if it doesn’t seem like it in the moment.

The DOJ announced its move against Google just three months after CEO Pichai testified before the House Judiciary Committee.

Now, two different Senate committees are hovering over the same targets, and both will be grilling the Twitter and Facebook CEOs separately, before and after the US presidential election.