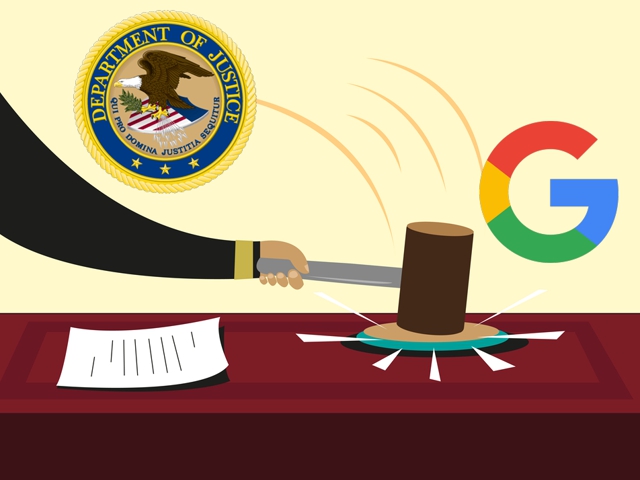 Today, the Department of Justice smacks Google with an antitrust lawsuit that claims the big tech giant engages in anticompetitive behavior to hold a monopoly over search and online advertising.

The Department of Justice (DOJ) has charged Google with “unlawfully maintaining monopolies in the markets for general search services, search advertising, and general search text advertising in the United States through anticompetitive and exclusionary practices” in violation of Section 2 of the Sherman Act.

“Today, millions of Americans rely on the Internet and online platforms…Competition in this industry is vitally important, which is why today’s challenge against Google…for violating antitrust laws is a monumental case both for the DOJ and for the American people.” — AG Barr pic.twitter.com/CG8UKXDtZo

In particular, the Complaint alleges that Google has unlawfully maintained monopolies in search and search advertising by:

Senator Josh Hawley described the move by the DOJ and 11 state attorneys general as “the most important antitrust case in a generation.”

Hawley, who is one of the biggest critics of big tech on Capitol Hill, added that “Google and its fellow Big Tech monopolists exercise unprecedented power over the lives of ordinary Americans, controlling everything from the news we read to the security of our most personal information.

“And Google in particular has gathered and maintained that power through illegal means.”

The federal antitrust lawsuit coming from the DOJ comes in addition to the ongoing antitrust investigations by multiple attorneys general against Google.

Google CEO Sundar Pichai is slated to appear before the Senate Commerce Committee on October 28, along with Twitter CEO Jack Dorsey and Facebook CEO Mark Zuckerberg, to give testimony on Section 230.

The three CEOs gave testimony on anti-competitive allegations to the House Judiciary Committee less than three months ago, along with Apple CEO Tim Cook.

During the July 29 hearing, Rep David Cicilline told Pichai, “As Google became the gateway to the internet, it began to abuse its power. It used its surveillance over web traffic to identify competitive threats and crush them.

“It has dampened innovation and new business growth, and it has dramatically increased the price of accessing users on the internet, virtually ensuring that any business that wants to be found on the web must pay Google a tax.”

This week, the Senate Judiciary Committee is also considering authorizing subpoenas for both Dorsey and Zuckerberg to give testimony about censoring articles by the New York Post.

Last month, the DOJ sent two reform proposals to Congress regarding Section 230 of the Communications Decency Act of 1996:

“Ensuring that the internet is a safe, but also vibrant, open and competitive environment is vitally important to America,” said US Attorney General William Barr, in a public statement at the time.

“We therefore urge Congress to make these necessary reforms to Section 230 and begin to hold online platforms accountable both when they unlawfully censor speech and when they knowingly facilitate criminal activity online,” he added.