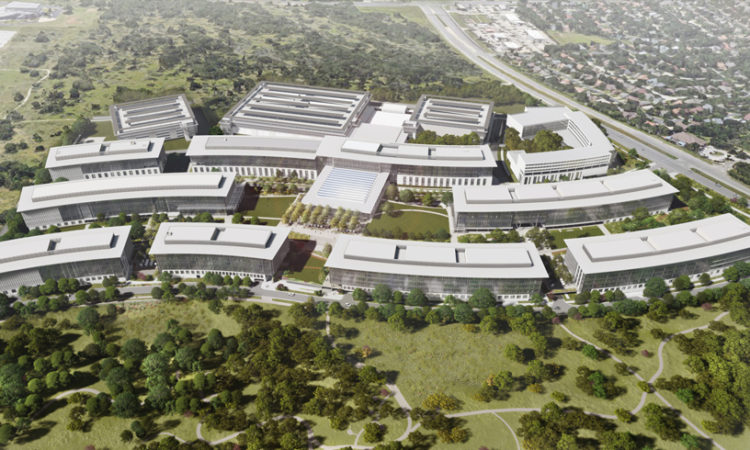 Apple announces today that it is beginning construction on a $1 billion campus in Austin, TX, which will employ between 5,000 and 15,000 staff upon completion in 2022.

“With the construction of our new campus in Austin now underway, Apple is deepening our close bond with the city and the talented and diverse workforce that calls it home”

Adding to the approximately 7,000 Apple employees already working in Austin, the tech giant is breaking ground on a new 3 million square foot campus, which is set to open in 2022 and initially house 5,000 people with plans to expand to 15,000 staff.

“With the construction of our new campus in Austin now underway, Apple is deepening our close bond with the city and the talented and diverse workforce that calls it home,” said Apple CEO Tim Cook, in a statement.

“Responsible for 2.4 million American jobs and counting, Apple is eager to write our next chapter here and to keep contributing to America’s innovation story,” he added.

“Building the Mac Pro, Apple’s most powerful device ever, in Austin is both a point of pride and a testament to the enduring power of American ingenuity”

Cook added that the new Mac Pro is also being built in another Apple facility in Austin, and that those will begin to ship in December.

“Building the Mac Pro, Apple’s most powerful device ever, in Austin is both a point of pride and a testament to the enduring power of American ingenuity,” the Apple CEO said.

The 244,000-square-foot Mac Pro facility employs more than 500 people in a range of roles, including electrical engineers and electronics assemblers, who build each unique unit to customers’ specifications, according to an Apple statement.

It is interesting to note that the LA Times reported on June 28, 2019 that the Mac Pro would be manufactured in China and didn’t mention production in Austin.

“Apple and its manufacturing partners invested over $200 million in the Mac Pro facility in Austin, building out the complex assembly line where the Mac Pro is produced,” according to the company website.

And in January, 2018, Fortune reported that Apple would be bringing more jobs back to the United States thanks to a tax overhaul.

“Apple Inc. said it will bring hundreds of billions of overseas dollars back to the US, pay about $38 billion in taxes on the money and invest tens of billions on domestic jobs, manufacturing and data centers in the coming years,” Fortune reported at the time.

Apple’s growth in Austin is part of the company’s nationwide expansion — announced in January 2018 — to increase its investment in manufacturing, engineering and other jobs across the US.

The news comes just one day after Google announced it was expanding in Japan with the opening of a new startup campus in Tokyo.