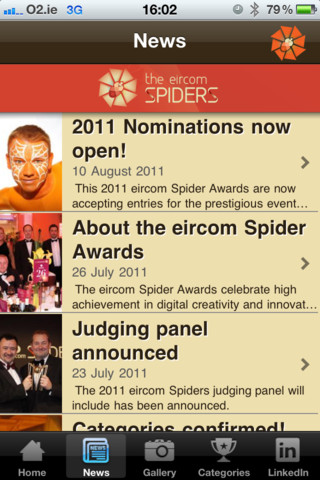 just over a month away from the awards ceremony and eircom has released a free iPhone app for this year’s Spider Awards.

Interestingly the app is not just designed to give bits and pieces of information about the awards but has been designed to provide real-time information in the run-up to the event on November 10.

Of course, the app has the usual content; information about the categories, image and video galleries, and will also be used to announce the shortlist on October 24.

But where the app will really become useful will be on the night when eircom will be updating the content in real time to announce the category winners.

eircom has also integrated the app with LinkedIn to allow users and nominees to interact with one another.  It will also give special offers and when the categories are announced the app will allow users to vote for The People’s Choice Award winner.

Stephen Beynon, the awards’ chairman said “The eircom Spider Awards app will deliver awards news to the app users. The awards play an important role in highlighting innovation in technology and rewarding those who have made an impact in the online community. Our new app compliments the awards website and supporters will be able to use the app to check which nominations have been shortlisted in the 20 award categories, vote for the People’s Choice award and be a part of the awards ceremony even if they are not at the Convention Centre on the night. The app also supports LinkedIn group interaction which will help build and foster relationships for the user. ”

The eircom Spiders app is now on the Apple App Store, the awards take place on November 10 in the Convention Centre and are hosted by Dara Ó’Briain.